“The River” turned out to be a show that was much better than it had any business being, given the questionable nature of the production style and the pedigree of the production staff. When the story was less about vague supernatural threats, and more about the characters, it improved tremendously. Even so, it’s such an uneven production that I had no idea what to expect from the finale.
To some extent, I’m still not sure. The beginning of the episode was some of the most unnerving material they’ve handed the audience yet. Lincoln’s death came as a total shock, to the point where I had to rewind to process what had happened. And then the ritual to bring him back to life (never a good idea) was just creepy as it gets. There was little doubt of consequences to come.

Having Jonas want Emmet dead was a nice way to subvert expectations regarding Kurt. Better yet, it made perfect sense within the context of the season as a whole. Emmet was willing to give Jonas to the spirits of the Bouina, and Jonas took that personally. I guess he wasn’t expecting the vengeful side of the Bouina to possess Lincoln during the resurrection and exact revenge. Creepy, calm revenge with a side of bloody sandwich. 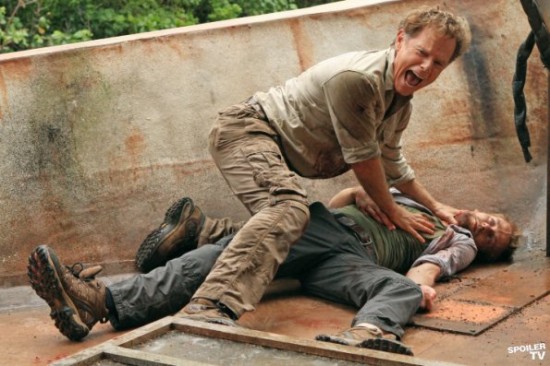 It answers one of the lingering questions about Jahel: just how much does she know? As it turns out, she has a genetic gift for connecting with the spirits of the Bouina, though connection and control are too very different things. Demonic Lincoln was very casual in his evil ways, between taking down Kurt and making the moves on Lena. (Speaking of, I’m pretty sure the camera angle towards the end showed as much of Lena’s chest as Standards and Practices would allow.)

Of course, this is the perfect example of how the format of the show is its worst enemy. In a film, the intensity of that scene would have been preserved, since it would play out completely without a pause. Instead, because this is television, the tension was broken by a ridiculously timed commercial break. If this series somehow survives, they really need to take a step back and rethink how they plan for act breaks.

Another problem is the solution. Because this is ultimately a Spielberg production, it had to be about family and the love between a father and son. Which can work, but it’s such an overused trope that it left me wanting. Granted, it’s just an inverse of the emotional drive that sent Emmet’s family to go find and rescue him, but it still felt far too convenient.

The season (and possibly, the series) ends with the way out of the Bouina cut off by the forest itself, with new circuitous paths revealing themselves in the process. Even though it leaves a lot of questions unanswered, in a way, I think it works, if one thinks of the search and rescue of Emmet Cole as the point of the story. Considering the nature of the show, it’s probably the only way they could have ended it.