The Walking Dead 2.13 Review: "Beside the Dying Fire"

There was never any doubt that Hershel's farm would eventually fall to an outside threat, but it was a bit of a surprise that that outside threat ended up being the Walkers. For a while there, I had started to fully expect that Randall's group would be the ones to descend on the farm. In some ways, that might have been more interesting. But I suppose the zombie threat has been a bit underplayed this season, so it makes sense to bring them back in full force to cap off the season.
All in all, the season finale gets the job done rather well. The fight for survival on the farm and subsequent escape is one of the more harrowing sequences that the show has delivered thus far. It's well-executed chaos and it's pretty thrilling stuff. This season has resulted in a lot of the characters getting on my nerves, and has failed to properly develop most of them, but throwing them all into such a horrific life-or-death experience does have the effect of making them seem more like real people. It's much easier to sympathize with, say, someone like Carol, when she's being helplessly backed into a corner by zombies with nowhere to run. Or Andrea when she's left for dead and running for her life through the woods.

There were a number of points where characters seemed certainly doomed, and other points where characters are unexpectedly, gruesomely killed. But ultimately, what's so surprising about the whole sequence is how many of the characters actually survive. When it's all over, Jimmy and Patricia are the only two deaths, and they had even less lines than T-Dog did this season. When you think about it, they're little more than red-shirt deaths. But their deaths are shocking and abrupt enough to add tension to the scene, and it makes sense to trim off unnecessary cast-members before going into the third season. 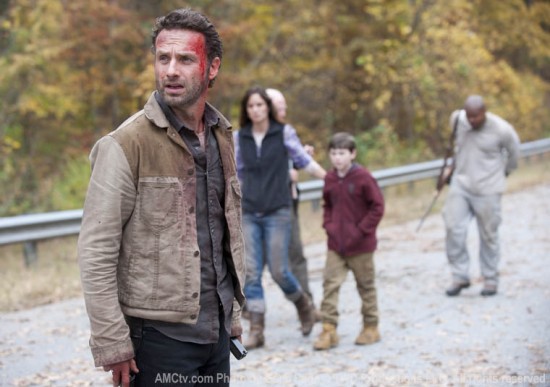 I was especially pleased, and completely surprised, to see Hershel surviving the events at the farm and escaping with Rick. I should have mentioned before that Hershel was one of the characters that I'd like to see survive. I guess I just thought that his death was a foregone conclusion. And seeing Hershel holding off the zombie hoard with a shotgun, after saying that he plans to die defending his farm (which I can personally relate to pretty strongly), only made it seem more inevitable. But he does survive, defying my predictions. And not only that, it looks as though he'll be around for at least the start of season 3. How long he survives after that is anyone's guess, now that the show has deviated from the comics by having him escape with Rick and the others.

Another surprise is that the escape from the farm is over relatively quickly, leaving much of the episode open for dealing with the aftermath and setting up key elements for the third season. Andrea is rescued by a hooded figure wielding a sword, with two arm-less zombies chained to her--a character who fans of the comics are very familiar with. This character is such a fan favorite, that it's been virtually impossible for me to avoid hearing about her. Additionally, that last shot of the episode is equally likely to excite fans of the comics. I've tried to avoid comic spoilers as much as possible, but there are some elements that fans have been clamoring for since the start, so it's been quite difficult to avoid spoilers entirely. I'd comment further on this, but there are likely plenty of readers who have heard nothing about these elements taken from the comics, and want to go in completely fresh.

A major focus of this aftermath is Rick's psychological state, and the questioning of his leadership. It's clear that we're meant to see Rick as a man who is starting to lose control and enter a morally grey area, and that he's just rationalizing everything to ease his conscience. But I find myself still supporting Rick. He has his problems, and he is definitely losing a lot of his cool. But I think that he's done a better job of leading the group than anyone else would have. No one else in the group could have remained in his position and kept the group focused on a hopeful objective. Now he's getting sick and tired of being so unappreciated for all that he's done for the group. Everyone looks to him to solve their problems, and then blames him whenever something goes wrong. I think that he's earned a little frustration and rage.

The finale also offered up a couple of interesting revelations about the Walkers themselves. We finally discover what Jenner whispered to Rick back at the CDC--that "we're all infected". Not "Lori's pregnant", as many (including myself) suspected. The season has been quietly building to that revelation for a few episodes now, dropping subtle clues and then dropping a couple of major clues in the previous episode. Fans of the comics are already well aware of this fact, of course. The other interesting piece of Walker info is more of a new mystery than an actual revelation. The reason the Walkers arrived in such force is because they seem to be migrating, for some reason. And I'm guessing it's not just because of the helicopter (which is another mystery in and of itself). For now, I'm just assuming that the Walkers don't like colder weather.

It's a pity that this season of "The Walking Dead" never quite lived up to my expectations, but as expected, the finales (and mid-season finales) tend to be above-average. To re-iterate an old, well-worn point, it may simply be that these climactic episodes tend to play much more to the show's strengths as a suspense-driven thriller, than do the many episodes in between that focus on uneventful character interplay. I hope that season 3 will make efforts to address the show's core flaws and deliver a more polished experience with better character development, as well as better pacing. But I won't hold my breath.