Talk about bad timing. Sally’s possession by her own Reaper persona takes place at the worst possible time, as Josh is about to turn during the full moon and Aidan needs a fix of human blood. For Sally’s part, she has fallen into that beloved trope of an internal fantasy world, as the Reaper personality seeks to keep her Sally personality happy and distracted.
The purple-laden fantasy world that Sally’s mind produces has a few advantages. For Sally’s part, it gives her a sense of happiness that we’ve never really gotten to see. For the audience’s part, it gets Meaghan Rath out of that damned sweater and into far more attractive clothing. Sally was beautiful before, but she is positively stunning throughout this episode. Offset nicely, of course, but how creepy she is when possessed by the Reaper, screaming at her roommates.

What I love about this episode, and the Reaper plot element in general, is that it expands on the ghost side of the mythology in some very interesting ways. One of the enduring questions about ghosts as a concept is how a person’s psyche would remain intact following death. The Reaper is quite possibly a split personality created by the darkest impulses of Sally’s mind, perhaps triggered by her proximity to the door. Alternatively, the Reaper could be some kind of parasitic psychic creature, able to “infect” a ghost and become a part of them in the process. 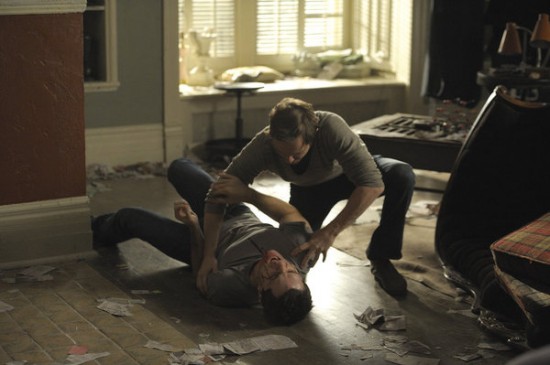 It was great to see Zoe back, because it was another reminder that the writers were really thinking things through all season. To maximize the drama, Sally had to have someone like Zoe to betray on so many levels. And Zoe facilitated a lot of the details in Sally’s character arc. And there had to be a mortal involved in this powderkeg of a situation to up the ante. Aidan’s reveal to Zoe of his true nature was one of the funniest moments on the show in a long time.

Of course, the writers had to insert little moments of levity, so that Aidan’s attempt to drink from Josh would hit like a punch to the gut. Having werewolf blood be a narcotic of sorts for vampires is a staple of “True Blood”, so making it a narcotic that poisons within minutes was a nice twist on audience assumptions. Though Josh’s concern over how his blood tastes was a perfect little character beat.

Perhaps the best thing about the episode is that it’s not a tidy fix to the whole Reaper problem. Sally now has Scott the Reaper as a seemingly constant companion, a reminder of all the dark impulses that she let come to the surface by indulging in all the things a ghost should avoid. Scott will also serve as a reminder of how tempting it would be to return to those habits, and the price that she would pay. Clearly, with three more episodes this season (and a full season still to come), there’s more to come with Sally’s journey.