The formula of "Lost Girl" is starting to show the tell-tale signs of wear and tear around the edges, in that way most shows do by the time they hit double digits. Nonetheless, the writers are still good at breathing life into things and there's plenty of character and mythology ground to be covered, as "The Mourning After" demonstrates aptly by following up on the most intriguing threads of previous stories.
Bo and Kenzi are hired to investigate the death of a local woman who left some less-than-self-confident graffiti on the walls before taking a bath with her hairdryer. The victim's sister is convinced it can't be a suicide, and the investigation soon leads to a local nightclub, a singles speed-dating group and a succubus named Saskia. Meanwhile, Trick needs help in recovering a lost item and keeping the ownership of his bar from falling into the hands of a fellow Fae.

Both stories are relatively simple by the standards of the show, each held together by the strong characters and a few fresh new elements as the writers show their willingness to throw ideas at the wall, drawn from their own imaginations or the vast and ridiculous Fae lore, and see what sticks. Little touches here and there, from the shifting dynamic of the love triangle (witness Bo's cold shoulder to Lauren throughout the episode) to the friendships forming between some of the beta characters, hint at "Lost Girl" having a Whedonesque status quo – that is to say, one that's fluid, tentative, and likely to change without a reset button. 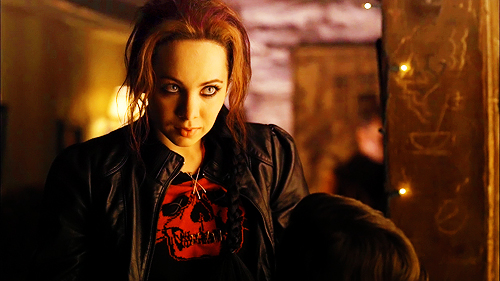 The introduction of Saskia is a big, whopping plot element disguised as a fun character, adding some new dimensions to the past and future of the show. Exactly as one would hope, Bo leaps on the chance to learn from an experienced succubus, illustrating just how little we've known about her species of Fae up until this point, just the tidbits gleaned from Dyson and Lauren about potential and all that. Saskia has a bit more muscle to her and some cool new Fae abilities, all but promising that Bo will be able to take some a few levels in awesome in the future.

But more importantly, it's Saskia as a character that provides the greatest contrast and makes her a great foil for Bo. She – and most succubi, is she's to be believed – is shameless, amoral and ultimately loyal to no one but herself. The Dark Fae alignment isn't a surprise, but it does hint that were Bo to really embrace her Fae lineage, she would likely go down that path. And as a foil, Saskia throws some sharp light onto why Bo is a good protagonist: Her unwillingness to murder an enemy in cold blood or twist the fates of mortals around her finger for her own gain, and how she actually cares about what happens to the humans she helps, cements that while she might be a rubbish succubus, Bo is a good person.

The subplot with Trick and Kenzi (on top of Saskia's introduction) follows up on one of the previous episode's strongest threads by giving each of these BFFs their own subplot, and for the second time in a row, Kenzi doesn't seize this opportunity so much as surreptitiously slip it off your wrist while keeping you distracted with a charmingly cheesy Russian accent. She gets to charm people, sleuth out a culprit and snark it up just as well as Bo, and all without the aid of supernatural powers. From the moment the words "Trouble in the Shire?" tumble from her mouth, Ksenia Solo had run away with the episode and quite possibly with the show itself.

It also yielded some more interesting nuggets about Trick, following up on the reveal at the end of "Fae Day" by dropping some hints to Kenzi about his true nature. After all that's happened, it's tough to imagine the character actually being some kind of big bad, but given what we know about Trick – he's powerful, he's keeping secrets from the protagonists and he's up to something – it all adds a nice hint of mystery to the proceedings.

It's telling that there's not so much to be said for the actual storylines of "Lost Girl", which tend to be pretty straightforward, but a lot about the characters and the world that the writers have been building up for ten episodes now. The show continues to be a great offering from Canada and a great addition to the Syfy lineup.