“The River” is the kind of series that can be polarizing. As I mentioned the last time I reviewed the show, I think it fails on the basis of its central gimmick. Certainly the first few episodes relied so much on the “found footage” approach, and the jump scares that come with it, that the story was often buried. It’s no shock that the series has lost nearly half of its original audience, and it’s lucky to still have the chance to be seeing the end of its short first season run.

It’s ironic, then, that the series has moved past the silliness and really found its footing. This episode in particular managed to get under my skin. And what was the premise? Essentially the main character sitting in a room, watching the chronicle of Emmet Cole’s descent into madness and apparent death. Sure, there’s something distinctly meta about “found footage” that depicts a group watching “found footage”, but it works remarkably well.

Kudos must go to Bruce Greenwood for making this episode work. So much is conveyed through his reactions and body language, and I can just imagine how exhausting filming this episode must have been. Yet he sells the slow but steady physical and mental decline of Dr. Cole so well that you forget that someone had to have gathered all these tapes and belongings for the crew of the Magus to find. (And for that matter, the indications earlier in the series that Cole is still alive.) 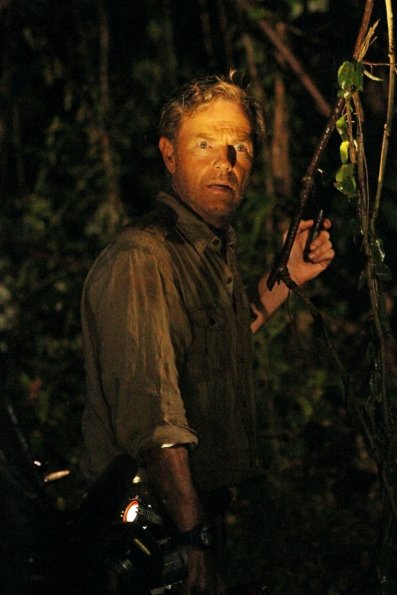 Cole starts off in a bad mental place, as he insists on continuing the search for “the source”, even though the Magus is nearly out of fuel and things are getting very, very dangerous. So Cole leaves with Manny and Rabbit, two other crew members. They are searching for the same waterfall where the current crew found his belongings (which adds to the tension), and quickly run into something otherworldly and possibly demonic.

By the time Manny is skinned alive, and the hero-worshipping Rabbit takes most of the supplies to make a run for it after a harrowing overnight ordeal, Cole is left with his dog, his mission, and his skills. And it quickly becomes clear that his skills are more limited than he imagined. There comes a point where Cole is delirious, and his previously cheerful interaction with the handheld camera becomes an extended document of his impending doom.

What makes this work from a storytelling perspective is that the external threat of the Tunchi, this supposed demon that kills, is really a metaphor for death itself. Cole figures out, fairly quickly, that if he whistles the same musical melody that the Tunchi seems to make, the threat passes. As Cole falls prey to the lack of clean water and food, it becomes harder and harder to whistle. And so of course, when all seems lost, he no longer can, and it seems like the Tunchi is finally going to claim him.

Most of the episode has the crew of the Magus, Cole’s family and friends, watching this play out with increasingly sober and horrified expressions. Everyone gets a moment where Cole reaches out to them through the camera, or in one case, over the satellite phone. To punctuate Cole’s helpless situation, Lena admits that she set off Cole’s beacon, as found it the series premiere, because she needed the others to search for Cole in the hopes of finding her own father. It snatches one measure of hope out of the equation at just the right time.

The very end of the episode had the potential to undo all of the goodwill that Cole’s story had created, but it actually makes sense within the context of the story. The miraculous tribe that Cole tells Manny and Rabbit about earlier in the episode seems to save him by leaving him at a nearby outpost (which seems awfully big and accessible for being so close to a place that is supposed to be uncharted). The problem is, they continue to use the cameras to film the act, which then allows the Magus crew to find the outpost which, of course, is deserted and seemingly destroyed.

However, it occurred to me that the writers took this into account. Somebody left all of these tapes and the rest of Cole’s belongings at the waterfall. Who could it have been? It seems logical that this tribe considers it their role to protect “the source”, and what better way than to draw anyone aware of Cole’s movements into a trap? And since they were clearly watching Cole from the start, and therefore know that he was in contact with others on the outside, reviving Cole and leaving evidence of his apparent whereabouts would be a perfect trap. (In fact, one could interpret the “Tunchi” to be the tribe itself.)

My guess is that the tribe took Cole to the outpost, took some time to prepare his belongings for whatever expedition might follow, and then wiped out the outpost. Since we have reason to believe Cole is still alive, he may have escaped the onslaught with a few others. It also gives me some hope that the writers and producers recognized the possibility of quick cancellation, and wrote the season finale with enough closure to work as a series ender. After all, while the story could continue, all of this could be written to come to a decisive conclusion. (After all, since the entire series is “found footage”, wouldn’t it be neat if this expedition met the same fate as Cole, and this footage was left for “us” to find, to be drawn into the same circumstance?)