SciFi Vision | All Reviews | Television Reviews | Advance Preview: See is an Ambitious Sci-Fi Drama With Stunning Visuals That Has Potential

Advance Preview: See is an Ambitious Sci-Fi Drama With Stunning Visuals That Has Potential

When Apple TV+ goes live tomorrow, it will debut the first three episodes of the series See, created by Steven Knight. The show takes place 600 years in the future after a virus has wiped out most of humanity, with only two million people left surviving. The virus also rendered the survivors and their subsequent offspring without sight. After centuries with no one born able to see, sight becomes myth and even heresy to discuss. Humans learn to adapt to a new way of life.

Things change when in the village of Alkenny, Maghra (Hera Hilmar), wife of Baba Voss (Jason Momoa), gives birth to twins fathered by a different man.

When it’s discovered that the babies are the first people to have the gift of sight in centuries, Queen Kane (Sylvia Hoeks) sends her Witchfinder General, Tamacti Jun (Christian Camargo) to the village. 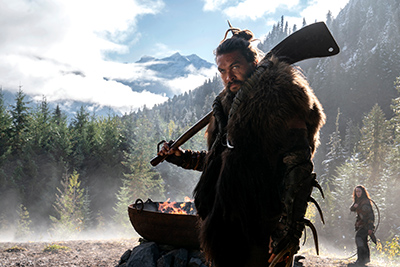 After reading interviews with the cast and crew of See, I knew that the show would be something unique, as they not only gave the actors a training camp where they covered their eyes to take away their sight, but they also hired authentically blind and low vision actors, which is a big step forward in representation for the disabled community.

I was excited to get a look at the first three episodes of the new show, which would be one of the few series that would premiere with the new Apple TV+ streaming service.

With stunning visuals all around, the first thing I noticed is how gorgeous the sweeping landscapes are, as is the cinematography; just the whole look of the film drew me in right away. There is also so much attention to detail, which enriches and authenticates the world and makes it all the better. It’s easy to tell everything has been completely thought through, from their “written” language of knots, to the ropes strung around the village to move by; it's all very convincing. All the cultural aspects that are a part their lives help hold it all together. 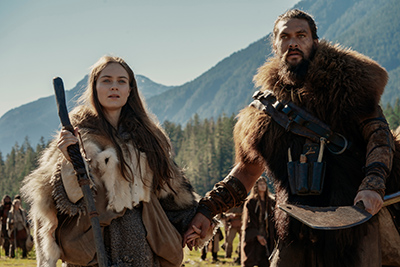 The acting is excellent. Jason Momoa embodies Baba Voss, and not just as an action star; he really stepped up to the plate unlike I've seen before. Alfre Woodard as Paris is also brilliant, and it was easy to see why people would follow her. Another standout was Sylvia Hoeks. Even with two very odd and gratuitous scenes (you’ll know them when you see them), which I'm not sure how to feel about, she does an outstanding job bringing the queen to life. Nesta Cooper as Haniwa and Archie Madekwe as Kofun were also quite enjoyable; however, except for a tiny scene, they don't show up until the third episode.

I also loved the way the seeing actors played blind characters. They did a fantastic job staying true to the story and looking through everything rather than making eye contact and were really believable.

Even the fight scenes were choreographed perfectly. It was so interesting to see people would fight to the death without being able to see. You would think it would be impossible, but you realize that neither side can see, so they are on even ground. Things are just done differently, as people would learn to adapt. Watching the way they moved around each other was fascinating. 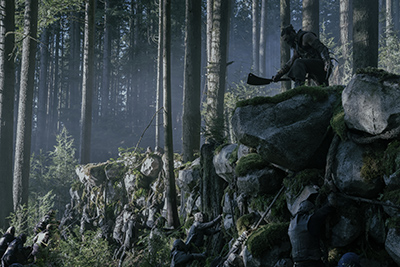 The story itself is ambitious. The idea of what they are trying to do is a tall order, and it could easily fall into something stereotypical and boring. Despite a slow start, it is definitely not that. The show becomes quite compelling, even though it does have some weird moments, and the second two episodes moved by at a much quicker pace. The director of the first three episodes, Francis Lawrence, has really brought his A game. The series has the potential to captivate its audience if it continues moving in the same direction.

If you are a fan of science fiction or just one of great characters, you will really enjoy the new series, and at $4.99 a month, you really can’t beat the price of the new streaming service, which will be available to the public, starting tomorrow, on all Apple devices.