I suppose it was inevitable that “Grimm” turn to that most tired of genre clichés, the “alien” gladiator games. How many genre shows have had an episode based on this premise, early in the series’ run? I think back to “Babylon 5”, an otherwise top-flight show, and how “T.K.O.” was one of its worst episodes in its entire run. Few series ever make it palatable, and “Grimm” is certainly no exception.
Granted, the writers did manage to turn the concept around by the final act, replacing Monroe with Nick for the climactic contest. Usually Nick is the one who is way out of his depth and in desperate need of a rescue by the more creature-savvy Monroe. Instead, a Grimm gets into the ring, and there’s an entire subculture in the stands, salivating at the chance to see a hated enemy brought down.

One gets the distinct impression that this was all supposed to be some kind of important episode for Renard, but if anything, it just reinforced my opinion that the writers haven’t been at all consistent with how the character is treated. If he’s supposed to be the main antagonist for Nick, as previous hinted, then they haven’t laid the foundation. If he’s a red herring, and really working behind the scenes to prepare for the real threat, then they certainly haven’t earned that twist. 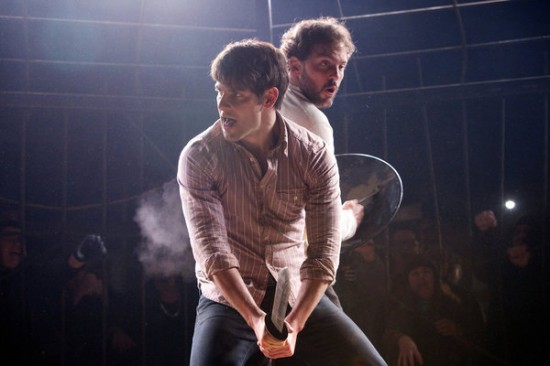 Renard, as a Reaper sending the worst of the worst to the Games, could be a strange sort of ally for Nick, if they would just peel back the intentional layer of aggravating mystery. The Reapers are creatures who are charged with keeping balance within their world; Grimms are humans that take down the creatures that cross the line. This should be grounds for interesting drama, but the writers don’t seem to be mining it very well.

This is also another episode leaving me worried about Juliet. While the writers clearly want us to believe that Nick is losing touch with the life that ought to keep him grounded, all I see is a setup for her eventual victimhood (either death or close to it), and an argument for why Nick should leave her and devote himself to his appointed role. Just as I still think his partner should be brought into the fold, and every episode where that does not happen digs the hole deeper.

At least part of the problem is the fact that it took four writers to put together a script that is based on one of the oldest tropes in the book. Yet I must admit that “Grimm” has managed, against all expectation, to hold the line in the ratings. While better shows (“Fringe”, “Supernatural”) struggle to maintain their meager yet devoted fanbase, “Grimm” has been holding a season average that is not much less than its post-premiere rating. When it can limp along with casual interest at those numbers, on a Friday night, I guess there’s little incentive to improve upon mediocrity.