While I sometimes struggle with the show each week, this one was a pretty good episode, though a bit slow. Most of the scenes with Ezekiel, Carol, and Jerry were unnecessary, other than the stuff with the charter. They could have just made a comment that they got the bulb. However, I can’t say they weren’t enjoyable. I especially always love seeing Melissa McBride. Jerry of course was also a lot of fun like always, though I’m not sure it was worth risking their life twice for the bulb.

I also worry about Jerry. I love seeing him happy and with a family, but no one has died in a while, and a lot of times once people are settled it spells the end.

As for the storyline with Alpha, I have mixed feelings. Overall, it’s nice for once to see things go as planned for the group, but at the same time, not a whole lot actually happened. As Alpha said, “No conflict.” I am really enjoying Samantha Morton as Alpha though.

I also think the scene with the mother leaving the child to cry at Alpha’s behest was interesting, as it really showed how she rules and the others don’t stand up to her. Negan was the worse villain on the show yet, in my opinion, but I don’t think he would have cruelly let an innocent baby die when it could have been saved. Although really, it’s about the power. Her reasoning was more about showing Hilltop her command, and to scare them, of course.

I did enjoy the scene, however, where Connie is in the field trying to evade the walkers after she takes the baby, and you get it from her point of view, not being able to hear them hunt her. It provided a tiny glimpse into her world and how hard it would be surviving.

I do have to say though, some of the main parts of the episode really annoyed me. It’s obvious that no one wants to turn Lydia over to a child beater, but it’s ridiculous for Henry to think that they should let their people die, especially when they barely know her. I’m not saying that maybe there wasn’t a way they could come up with to keep Lydia and prevent their deaths as well, but that’s for the writers to decide. I’m just annoyed at Henry in general. The kid may be living with Carol and Ezekiel, but he sure hasn’t learned much. He’s old enough to realize that running away with Lydia could have caused a whole mess of trouble and perhaps others getting killed. He seems to get it after the fact when he talks to Daryl, but then he runs after her again. I get having a set of morals and wanting to be the hero, but does he not realize that it’s just causing more problems, because now someone has to go after him and risk their lives too? There are a lot smarter ways to go about it. He should have talked to Daryl and perhaps they could have come up with a plan.

So far luckily no one has died, but it’s obvious that their troubles are not over with the Whisperers.

In a flashback, Jerry tells Ezekiel and Carol that he and Nabila are expecting. 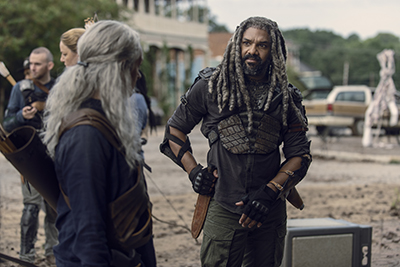 Jesus and Tara arrive bringing the Kingdom supplies, and she gives the charter to Ezekiel, Carol, and Jerry that Michonne has drawn up. She says that Michonne was letting it collect dust, and Jesus adds that Maggie’s not her fan right now.

Ezekiel says that he hasn’t given up on the idea yet, and when the time comes, he believes they will reunite and all sign it. He will keep it until then. Tara tells them she isn’t going back to Alexandria.

In the present, the Kingdom is getting ready for the fair. Jerry and Nabila now have three kids.

Meanwhile, Alpha tells those at Hilltop that she doesn’t want a conflict; she just wants her daughter Lydia back. Daryl, who knows her mother beat her, refuses, until she shows them that they do have Alden and Luke. She says a trade of two for one is fair. 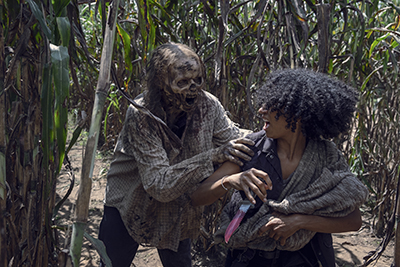 Daryl knows that as horrible as it is, it’s their only choice. Unsurprisingly though, Henry can’t accept it and helps Lydia escape.

While they look for them, a herd of walkers comes up behind the Whisperers. Alpha tells her people to keep them away from the hostages, for now.

The walkers come closer when a baby that the one is holding starts crying. The mother looks to Alpha who just gives her a look to take care of the problem. The mother reluctantly sets the baby down on the ground and steps back. Alpha tells those at Hilltop that it’s natural selection and the problem takes care of itself.

During this, Connie has been hiding in the corn field. She can’t hear what’s going on, but Luke signs to her with his hands tied behind him what is happening. She suddenly darts out and grabs the baby and runs back into the field. The Whisperers don’t stop her.

The Walkers chase after Connie, but Daryl steps in in time to save her. 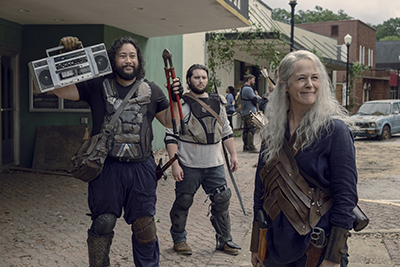 Meanwhile, while Hilltop continues to look for Henry and Lydia, the members of the Kingdom go on a side mission. They don’t have a lot of time before the herd gets there. Ezekiel tried to hide it from Carol at first, but finally admits that they are going to the movie theater, which is full of walkers, to get the projector bulb for the Kingdom to boost moral and to help bring people together at the fair. Carol agrees to help them.

After some mishaps, such as Jerry dropping the bulb into the walkers, they eventually get it, along with a frame to hold the town charter.

However, on their way home, they pass a sign with a symbol painted on it, presumably Alpha’s

Back at Hilltop, one of younger residents tells Daryl that she knows where Henry probably took Lydia. Enid asks Daryl to let her talk to him first. 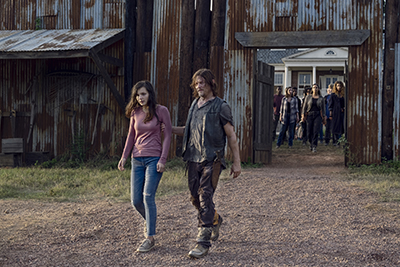 Henry is talking to Lydia. She says that they broke their own rules and weren’t supposed to come. She says that maybe her mother misses her and is sorry. He tells her that she’s wrong; people like that don’t get to be sorry.

Enid and the girl find Henry at the clubhouse; he tells Lydia to stay inside.

He tells them just to go and say they didn’t find them. He argues with Enid that it’s not right to turn her over.

She tells him that Alden and Luke will be killed. She also talks about losing Carl and his letters. She used to think the only important thing was to survive somehow, but that’s not living. Sometimes bad things happen, and you have to just find a way to live with it and not let it change you.

Henry struggles with the decision, until Lydia walks out and makes it for him. She tells him it’s okay and that she wants to go back. 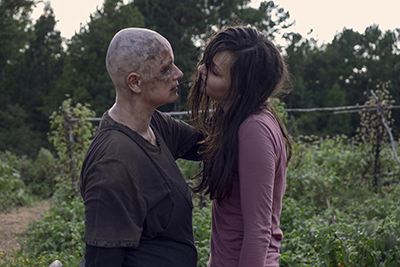 They go back to the gate, and Lydia walks out to her mother. She calls her “mom” and thanks her for coming back for her. Alpha strikes her in the face and tells her she must call her Alpha like all the others, but then hugs her.

Alden and Luke are released.

Henry tells Daryl he understands why he did it, but it doesn’t make it okay. Daryl agrees, but they did what they had to and have to live with it. Henry doesn’t understand how he can.

He tells Henry that sometimes the world is shit, and you live with it.

Henry says that he knows about the things he did in Alexandria to help when things went bad, but Daryl tells him that he doesn’t. He says that today he did what he had to do; they all did. 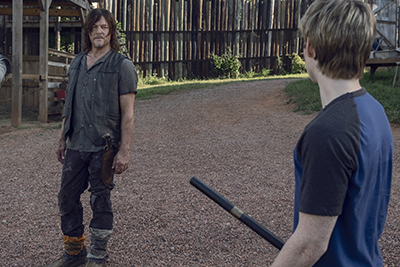 That night, things start to go back to normal. Enid sleeps with her returned boyfriend, and the Whisperer’s baby is given to Tammy and Earl.

One of the girls brings Daryl a note that they found from Henry, saying that he couldn’t live with it. Daryl gets up to go after him, but Connie approaches him wanting to know where he’s going. He shows her the note from Henry. She writes to him that she’s going with him - she can’t live with it either.
Twitter
BotonSocial por: SocialEmpresa
Category: TV Reviews & Recaps