SciFi Vision | All Reviews | Television Reviews | Advance Preview: Doctor Who - Resolution Starts of the Year with a Bang

Advance Preview: Doctor Who - Resolution Starts of the Year with a Bang

As the New Year begins, Team TARDIS discovers that something has been buried on earth since the ninth century, and it’s awake. The Doctor (Jodie Whittaker) calls it the most “dangerous creature in the universe.” Can they stop it before it takes control of the whole planet?

Holiday episodes for the show are always special, and although this didn’t have quite the same holiday spirit, being for New Year’s Day rather than Christmas, the episode, written by Chris Chibnall, still had the same flair, as the new year brings back an old foe. 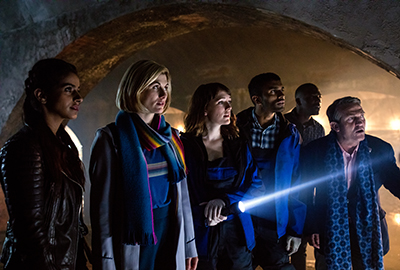 I have to start off by saying, I am very disappointed that the BBC and BBC America revealed what creature was returning in promo trailers before the episode aired, and I won’t here. Not everyone likes spoilers, and the reveal would have been much more enjoyable to see as a surprise, though fans would likely know before it’s revealed what it actually is. People did guess it with the hint that the most “danger creature” was returning. I would have preferred if even that line never made it to official promotional material. But I digress.

It was so great to see a returning favorite, as all of the alien threats for season eleven have been new. The part I appreciated the most, is that it was done in an interesting way we’ve never seen before.

The story itself was really entertaining, and there was a lot going on in the episode when it comes to action, from car chases to explosions, to a battle field. It’s a bit grander of a scale in a sense, with what’s at stake from what we already know of the threat. 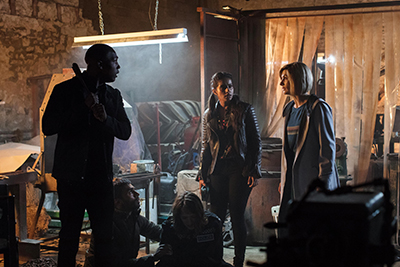 I also liked how as with previously in season eleven, the Doctor explains the backstory that viewers need to know in a way that doesn’t feel like annoying exposition to fans, and as I said, it’s a bit different.

The actors themselves were of course brilliant as always, and I especially enjoyed the interactions between Ryan (Tosin Cole), Graham (Bradley Walsh), and Aaron (Daniel Adegboyega).

Yaz (Mandip Gill) also had some excellent moments in the episode, and the other main guest cast, Charlotte Ritchie as Lin, and Nike’s Patel as Mitch, fit in well.

Usually I comment on the locations, and for the battle field, it was vast and fantastic, but honestly, I was so into the episode, I didn’t really even think about where the rest of it took place. I will say though, there’s a fun TARDIS reveal with one of the characters. 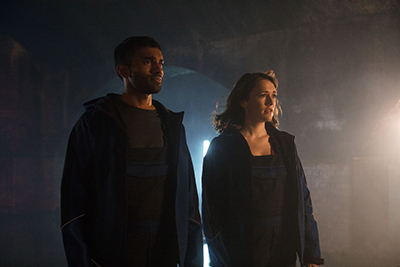 The only negative I have about the episode was the beginning intro. I didn’t love the way that they presented the exposition of what had happened in the 9th century for some reason. It just felt a bit bloated there and like they could have explained it much quicker and in a better way.

All in all though, the episode was awesome; it’s just really a shame that it will be the only one this year. I am excited, however, for what is to come in 2020.
Twitter
BotonSocial por: SocialEmpresa
Category: TV Reviews & Recaps