Before going into the premiere, I knew the episode would be different: new Doctor, new showrunner - a new start. I have to admit, I’d been hesitant about how the show would feel with a female Doctor. I trusted the writers, and I already knew that Jodie Whittaker is an outstanding actress by her work on Broadchurch, among other projects, but as a super fan of the show, I was still afraid of change. Don’t get me wrong, the idea to me of a female Doctor was fantastic and empowering, but could she fill the shoes of those before her? 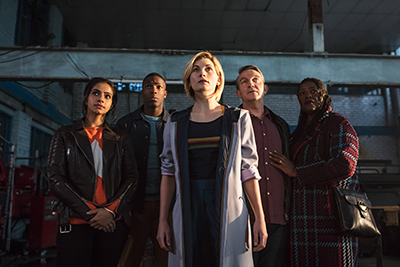 I’m happy to say, that it wasn’t long into the episode that I knew that she without a doubt could. She also did channel a bit of Peter Capaldi’s Twelfth Doctor before she became more accustomed to her new identity, which I appreciate. She was a bit ruder and brash at the beginning, but she quickly became her own Doctor and was brilliant.

However, part of the fun of a Doctor’s first episode, like with last time, is them figuring things out and struggling to remember who they are and who they will become. They’re all a bit frazzled in the beginning as they finish regenerating.

Another important part of the show is of course the (future) companions. In the episode we are introduced to Ryan Sinclair (Tosin Cole), Yasmin “Yaz” Khan (Mandip Gill), and Graham O’Brien (Bradley Walsh). Although we don’t yet know a lot about any of them, as is to be expected, I think they mesh well together. It’s interesting that there are three companions this season, as getting more than one is fairly rare, at least for any one period of time.

Of course, what would the Doctor be without an adversary? This episode brings fans the Stenza warrior alien Tzim-Sha (Samuel Oatley), a hunter wanting to bring trophies back to his planet of his victims. The villain works well, and the design is an interesting and creepy one. He also not only has a quite different ship that he emerges from that cracks like an egg (not so sure about the candy kiss shaped ship though!), but also a really great reveal of his trophies embedded in his face.

The storyline itself is exciting, filled with both emotional and funny moments as good episodes of the show usually are. New showrunner Chibnall, who wrote and directed the premiere, is off to a great start, if this episode is anything to go by. 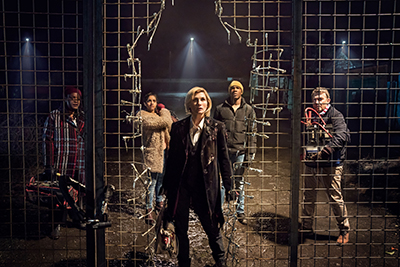 There are many standout moments to me in the episode, including a confused Doctor falling into the train at the beginning, with a little bit of the theme song playing in the background.

It makes for a humorous scene when she goes towards the danger and Yasmin calls her “madam.” She wonders out loud why she called her that, completely forgetting that he/she changed genders in the regeneration. She says that half an hour ago she was a white-haired Scotsman.

Another great line is when she tells Ryan she is looking for a doctor.

I liked the characters’ reactions to her, especially Graham’s comment about her not looking like an alien and Grace’s reaction to her having two pulses.

I also appreciated how they snuck in bits of information like the two hearts for new viewers, without doing it in a way that seems repetitive to fans. There aresome other exposition bits of the Doctor talking about her regeneration that works in the same way.

Another standout moment is the Doctor creating a sonic screwdriver, now more of a sonic Swiss Army everything-but-a-knife, out of melted spoons and scraps. As always, the Doctor is resourceful. Her line about trusting her instincts and helping others is also great.

Another bit I enjoyed is that even though she lets Tzim-Sha bring about his own demise if he doesn’t choose the right actions, she still gives him a chance, and she doesn’t approve of Karl (Jonny Dixon) kicking him off the crane arm. It serves as a reminder to viewers that the Doctor doesn’t approve of hurting or killing humans or aliens and always tries to reason with them and give them a choice, whether they are good or evil, and in the end, she does let him go. 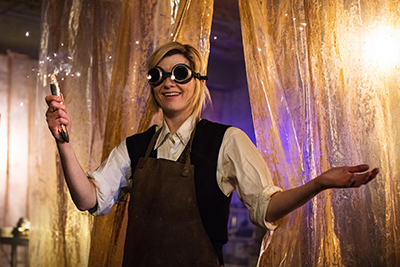 Also, her remembering who she is, saying “I’m the Doctor, sorting out fair play through the universe” is one of my favorite parts. The “I’m the Doctor” lines are always great, actually.

The only thing about the episode that slightly annoyed me is that because they publicized the upcoming companions before the premiere, it was really obvious that something was going to happen to Grace (Sharon D. Clarke) before the end of the episode. There was only a very slim chance that she would stay behind while Graham left with the Doctor for her nursing duties, but it was quickly established that she was the one who was braver and took more risks. This though, obviously, was not a fault of the story or the episode, just an observation. Perhaps if it wasn’t already known that there would be three companions, it wouldn't have been expected.

Regardless, near the end, I was pleased when it was revealed that Ryan was talking about his grandmother in the video the whole time, and not the Doctor, about being the greatest person he ever met.

Towards the end of the episode, I enjoyed the conversation that the Doctor has with the others about losing people, and that she lost her family long ago. This is a way to hint to new viewers that she/he did actually have a family centuries ago, but she is likely also talking about her other lost companions and friends, who always become her true family in the series, but always eventually leave, one way or another.

The scene with the Doctor trying on clothes in the store was apropos and fun to see something with her a bit girly, even if the outfit she comes out with isn’t. It’s a great reveal though. I do also appreciate the edition of the earring. I don’t think we’ve ever seen the Doctor wear, not just jewelry, but really any personal adornments, aside from Twelve’s ring (which supposedly was actually an addition by Capaldi to keep on his own wedding ring) and perhaps if you count Eleven (Matt Smith)’s bowtie.

In the end, I was surprised that the Doctor decided to leave her new friends and go after her Tardis on her own, not expecting to return. I figured she would come back for some reason, but I liked that they are zapped along with her. 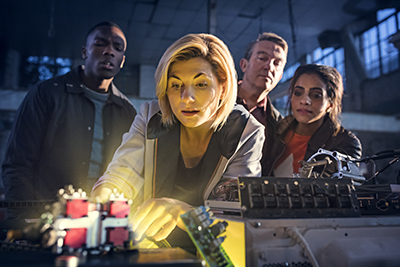 However, I kind of would have liked to have seen how the three humans get to safety from floating in space, as these are supposed to be standalone stories. We all know what happened to even the Doctor after being in outer space without a suit or his/her Tardis, and he/she isn’t even human. I'm assuming they are close enough to whatever is left of the Tardis to be under its protective air shell.

Regardless, the episode was excellent and a great start to the new season. I’m excited to see where Chibnall takes it and how Whittaker continues to create her own Doctor.
Twitter
BotonSocial por: SocialEmpresa
Category: TV Reviews & Recaps