Killjoys has really stepped it up recently as you could feel it start to move towards a resolution of the current storyline with the green, closing in on the final season. The stakes have continued to climb as the team has worked to keep the Lady from entering the Quad and threatening the fate of the universe. The season finale keeps the momentum moving right until the very end.

The final episode of the season picks up with Aneela (Hannah John-Kamen) having returned from the green in Dutch’s body. The episode follows her as she brings Johnny (Aaron Ashmore) and D’av (Luke Macfarlane) into the Greenspace to defeat the Lady once and for all. 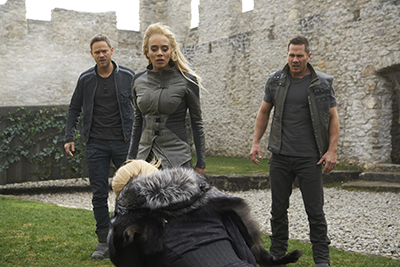 While the episode has Team Awesomeforce dealing with memories from their past that really pack a punch, back on Westerley, things go from bad to worse with the kids as there are some unforeseen consequences that need to be dealt with.

One of the things I enjoyed about the episode was getting a better understanding of what the characters have been dealing with as some explanations were given by Aneela. With so much going on recently, it’s nice to finally confirm some things and connect some pieces together. 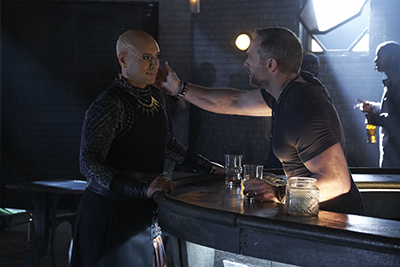 John-Kamen did an excellent job of not only slipping into Aneela and back, but also interacting with herself in the dual roles. You sometimes forget that both characters are played by the same actress, having such individual personalities.

Her interactions as she met with other characters were also fun. I especially enjoyed Turin (Patrick Garrow)’s conversation with Aneela.

Ashmore and Macfarlane were spectacular as well, bringing in solid performances that pull at the heart strings. 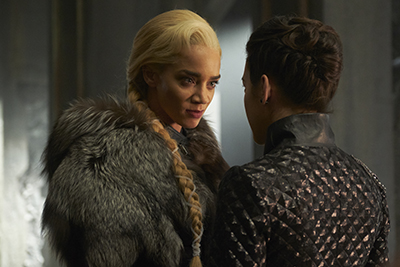 Also of mention, Pree (Thom Allison) and Gared (Gavin Fox), got some nice screen time together as well.

As always, with the serious also comes the laughs, and there are some great one-liners. Killjoys has always been fantastic at blending the feels with the funny.

All in all, “Sporemaggedon” is an excellent season finale that will leave you entertained, but also scratching your head moving into the final season.