Advance Preview: The Magicians Season Three is Magical Even Without Magic

At the end of season two of The Magicians, all the characters are devastated by the loss of magic after Quentin (Jason Ralph) kills Ember (Dominic Burgess). Not only has magic gone from Brakebills and all of Earth, but also from Fillory, where only creatures born with magic can still use it, which causes even more problems when the fairies take over the kingdom from Eliot (Hale Appleman) and Margo (Summer Bishil), as well as take Eliot and Fen (Brittany Curran)’s child.

Alice (Olivia Taylor Dudley) is left with a warning that the lamprey she wronged is coming after her, and Penny (Argun Gupta)’s fate is left undetermined.

The students depressingly study theoretical magic under Dean Fogg (Rick Worthy), however, there is a ray of hope when Quentin learns that Julia (Stella Maeve) can create some literal sparks of magic. 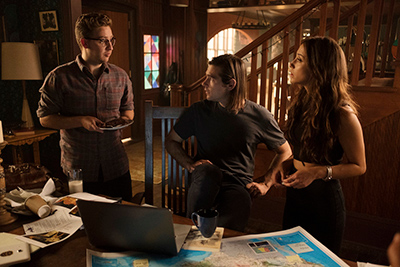 Tomorrow Syfy returns with all-new episodes of The Magicians with the season three premiere. The series picks up where it left off, with Quentin and Julia trying to find a way to bring back magic, Alice trying to avoid the lamprey, Kady (Jade Tailor) trying to save Penny, and the others in a world of hurt trying to defend the kingdom from the Fairy Queen (Candis Cayne).

I loved last season, but was really curious how they could have a show about magic where there was none and keep it flowing well, but they nailed it.

The start of the season focuses on a quest for keys that Eliot is sent on, but he must get help from his friends back at Brakebills as well. 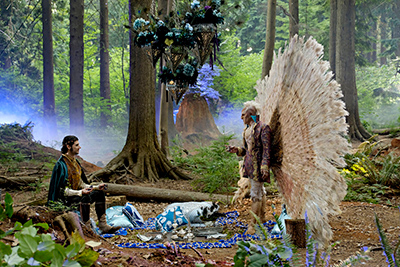 All of the storylines were fantastic and at times moving. I didn’t really feel like one story was more important than the other, so the events moved quickly for me, leaving me wanting more.

I loved the interactions between Margo and Eliot, especially when they are circumventing the queen. There is a really fun conversation that brings in quite a few pop culture references.

It was also interesting to watch the development of Alice over the first few episodes. After being a niffin, she is not the same person, and it was very eye-opening.

The love story of Penny and Kady was gripping and kept me on edge throughout.

Quentin and Julia on their search for magic was also enjoyable to watch, and I was happy to see Josh (Trevor Einhorn) brought back into the mix. 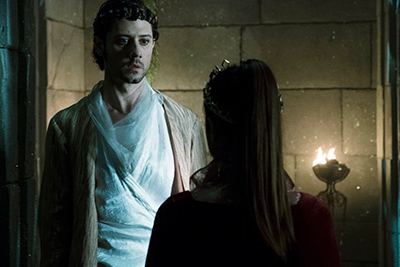 It also wasn’t only the leading cast that was a blast to watch, even the supporting cast was so much fun, as well as funny, with Tick (Rizwan Manji) specifically coming to mind.

The look of the show was as impressive as ever, from the beautiful set of the temperamental Muntjac, to the creature design of the Great Cock, the beautiful costumes, and everything in between.

Season three of The Magicians is off to a marvelous start and will hook fans and new viewers alike. I can’t wait to see what the rest of the season brings.
Twitter
BotonSocial por: SocialEmpresa
Category: TV Reviews & Recaps