SciFi Vision | All Reviews | Television Reviews | Eureka: Do You See What I See?

Eureka: Do You See What I See?

Tonight Syfy is airing three Christmas specials for their most popular series. The night starts with Eureka, with the episode "Do You See What I See?"

It's Christmas eve in Eureka, and as usual things don't go as planned. Sheriff Carter (Colin Ferguson) and Allison (Salli Richardson-Whitfield) are decorating when Allison leaves for GD after realizing one of Jenna's gifts is missing a battery. Meanwhile Carter is planning a surprise for her and the kids, which he and the others decide to test at Cafe Diem. 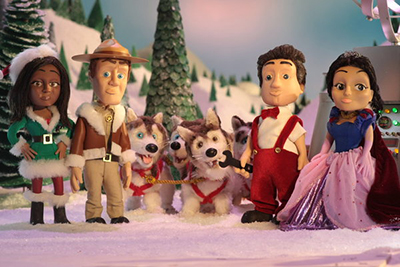 While they are gone, the kids are in the smart house and Kevin (Trevor Jackson) and Zoe (Jordan Hinson) decide to open a present to get Jenna to go to bed, which just happens to be the one missing the battery. Kevin, however, finds what they need. The gift however interfers with the super photon generator and causes everyone outside of the house to turn into cartoons, and unbeknownst to them, they control the story. 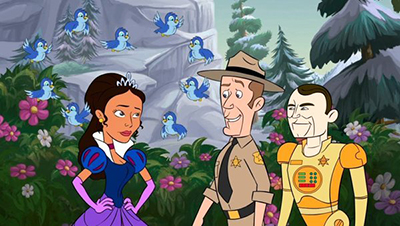 The design of the episode constantly changes from one animation style to the next, ranging from realistic CGI, to claymation, to anime, to copying different show styles such as Looney Toons and South Park, as the characters go through a miriad of complications while trying to figure out how to get back to normal.

During the mayhem, there are a lot of cute jokes and comedy bits, as well as nods to other shows, such as with Deputy Andy (Kavan Smith) who turns into a variety of well known robots. 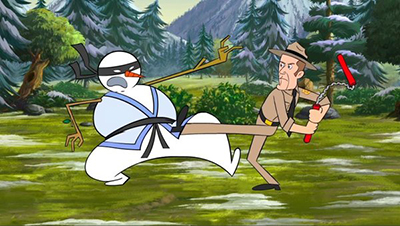 As it is a Christmas special, the episode does get a little silly, with a talking car (Jim Parsons), a talking sled dog (Edward James Olmos), and some of the characters are toys, but it's all in good fun and makes for a wacky episode. There are other returning guest stars as well, such as Chris Parnell, and Matt Frewer returns as Taggert, though for most of the episode, not as one would expect. Penguin tartar anyone?

The episode was enjoyable and worked as a stand alone. It was nice to see the cast back together again, even if most of it was not live action.

I can't really comment much on the animation styles, as most of it was incomplete at the time of my viewing, but it seemed to be going in a good direction. I was surprised to find out after an interview with the cast that the "claymation"/stop-animation does use dolls and is not just CGI as I had assumed.

Overall the episode was a cute Christmas tale, though slightly silly, but in a good way like many parts of Eureka often are.

To read more about the episode, please read the interview from the Syfy Digital Press Tour about the Syfy Christmas specials, as well as the recent conference call interview, coming soon, and be sure to tune into the special episode tonight on Syfy.