This week’s episode of Wynonna Earp focuses on Wynonna (Melanie Scrofano)’s pregnancy. Now that everybody knows that she is pregnant, it’s time for her to take care of herself.

The episode continues where the last one ended with Wynonna continuing the search for Tucker (Caleb Ellsworth-Clark), trying to figure out what their next step will be.

She and Dolls (Shamier Anderson) break into the Gardner’s house, determined to get the answers she needs.

The sisters act like they never knew Tucker’s plans and deny being a part of it, but Wynonna isn’t buying it. Beth (Meghan Heffern) and Mercedes (Dani Kind) need to be more careful to avoid Wynonna’s suspicions. Wynonna is no longer able to trust her friend. 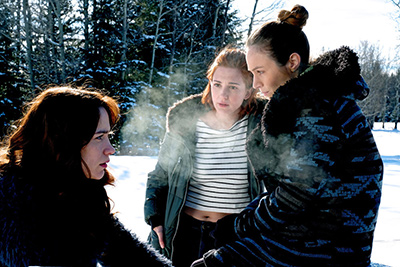 A doctor visits Wynonna for a medical checkup and runs some tests as we learn more about her pregnancy. She obviously has everyone’s support.

Dolls is going to take Jeremy (Varun Saranga) on his first stakeout as they need to keep an eye on the Gardner's house to see if Tucker will show up. There is a funny moment when Dolls tells him the mission isn’t “Cosmic Con,” and Jeremy corrects him with “Comic-Con.”

Meanwhile, Doc (Tim Rozon) is visited by an old enemy who comes to Purgatory to hunt him down for a crime he committed in Colorado in 1882. A young man was sent to mark him to be executed. This scene gives us some cool lines such as, Doc calling the kid a fanboy and, “I am starting to think you’re not here for my autograph.”

In the meantime at the homestead, Waverly (Dominique Provost-Chalkley) is having a talk with Wynonna about Doc’s feeling and the idea of him been the father of her child. Wynonna wants to take some blood samples to confirm the identity of the father. She admits to Waverly that Doc may not the father, and that she has to talk to him.

Waverly freaks out, thinking about what his reaction will be, and Wynonna tries to calm her down by saying, “Doc no-strings-attached Holliday.” Waverly answers her, “He’s all strings; he’s nothing but strings. He’s like a marionette puppy.” Again she tells Waverly she will be the only one to have a say about her pregnancy.

Doc enters the room and Waverly leaves to give them an opportunity to talk. That is the moment I was waiting to see the most in the episode. Wynonna tells Doc to stay, because she needs to talk to him. She thanks him for the note he gave her. Doc is interested in Wynonna’s health. He says he wants to be a part of her pregnancy. He will do whatever it takes to take care of her. All he wants is to be beside her to give her happiness: “I will do anything. I will give anything to ensure it.” 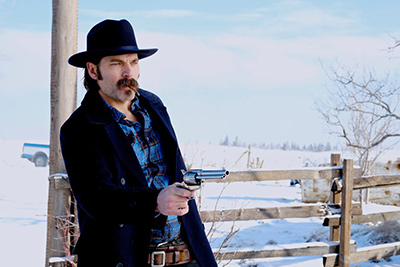 Wynonna for sure didn’t see that coming, especially from Doc. I think it was the most beautiful Wynonna and Doc scene because of how it ended with Doc touching Wynonna’s belly. If they took out the conversation between them and just used the last moment, it would still assure us Doc isn’t going anywhere.

During their stakeout, Jeremy shares his thoughts with Dolls about Wynonna’s baby. He is excited about the possibility of taking care of her baby. “You think they’re gonna get, like, a nanny? Or a manny?”

Dolls stops the conversation and makes sure he’s watching the house. They are still after the Widows, and apparently Jeremy has collected what it seems to be a piece of a veil of the Widows when they were back at Shorty’s.

Back at the homestead, Nicole appears at the entrance before Wynonna get the chance to leave the house. Wynonna thinks Nicole came for Waverley, but apparently Waverly told Nicole she was needed to watch over her while she isn’t around.

Wynonna drags Nicole to hang out with her at the Pussy Willows strip club, because she needs her help to identify who the biological father of her baby is for sure. I love it when Wynonna uses her pregnancy as a tool to get what she wants from Nicole by saying, “Don’t make me belly-bump you.”

Meanwhile Waverly visits Doc at Shorty’s. She thinks that he and Wynonna talked about the possibility of him not been the father of her child. When Waverly is misunderstood and doc tries to read between the lines of what she is trying to tell him, she accidentally tells him that he may not be the father. Only then does she realize he didn’t know about it. 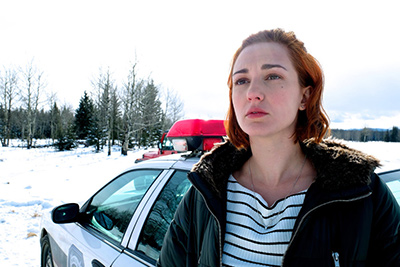 Wynonna is pregnant which means no alcohol for her. This bizarre scene at the strip club is super funny.

Wynonna admits to Nicole something she didn’t even tell Waverly: she had a one night stand a few months ago with the man at the club named Jonas (Mark Ghanimé). She says that he was nice, and they had fun.

Looking across the bar, Nicole sees Jonas and his eyes glow red when he tries to stop a man from harassing a woman at the bar. She realizes he’s revenant! What an awkward moment: Wynonna had sex with a revenant. Does that mean her baby could be a half revenant?

Nicole is wondering about that too when her phone rings. It’s Waverly. She tries to figure out how to get out of the moment by flirting a bit, but Nicole ends up not being able to do anything but tell her the truth, even when Wynonna pushes her to not tell a word. Nicole can’t lie to her girlfriend. Nicole tells her where they are right before Wynonna takes her phone away.

The call gets disconnected and Waverley gets pissed off, thinking Nicole hung up on her.

Wynonna and Nicole are discussing a way to get a DNA sample from Jonas when he sees them and comes over.

Doc is at the station with Dolls and Jeremy. He seems tense. He’s is organizing a few weapons when Dolls finds the moment to congratulate him on being the father of Wynonna’s baby. He wants them to get along. 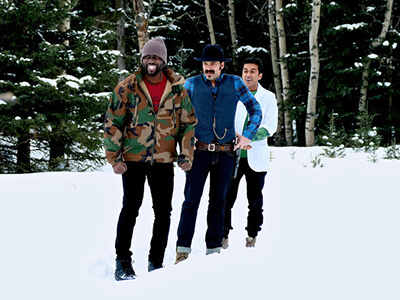 He and Jeremy need his help working on the toxin that they found on the veil. Dolls won’t let him take the weapons otherwise.

Back at the bar, the three talk, and Nicole makes sure to hide the fact that Wynonna doesn’t drink. Distracted she drinks her drinks as well.

Katharine Barrell as drunk Nicole was the sweetest thing I’ve ever seen so far from her character, if we put aside her Wayhaught scenes. It seemed freeing for her to act that way, such a joy of letting go and just having fun. I was laughing so hard.

Meanwhile, Jeremy wants to make a vaccine for the toxin with a binding spell, but instead he ends up binding the three men together.

The boys’ parts in the episode were a joy. I think their scenes made this one of the funniest episodes of this season.

Back at the bar, Jonas knew Wynonna was the heir all along and wants to brag. The women leave.

Jonas runs after Wynonna outside the club. He isn’t upset about the baby. He wants the world to know he got the heir pregnant. To Wynonna it doesn’t matter if he is, but she wants to be sure that the news about her pregnancy doesn’t spread.

Right before she gets the chance to shoot him with Peacemaker he runs, but Waverly shows up and stops him from escaping with her car door. Waverly looks angry and worried for both Nicole and Wynonna. 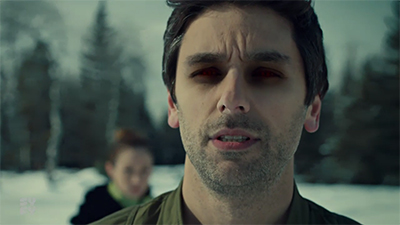 Meanwhile, Dolls gets to meet the ghost of one of his greatest heroes, Marshal Bass Reeves (Adrian Holmes), when he tries to help stop Doc from being executed by him.

Doc was sentenced to death for the seduction of the Honorable Justice Stanley Parker’s wife (he slept with her twice).

I liked in the scene how Dolls was talking about Doc and praising him to the Marshal. They have had a good friendship since season one. He tells Reeves that Doc is “a pain in the ass, but he’s also one of the most loyal and solid and fearless man I’ve ever met,” and that he’s a changed man. This saves Doc from execution.

Outside the club Wynonna and Jonas both talk about what happened that night. Jonas talks dirty to her about how easy it was to get her in bed. “You see, we always thought the best way to defeat the heir was to kill her. Lucky for us, she’s a whore who defeated herself by letting one of us get inside her.”

Waverley wants to protect her sister and tries to get him to stop saying things.

Wynonna needs to be sure that no one will know about that night with Jonas and this time shoots him with Peacemaker. Killing him was her only option.

The big dramatic scene between Melanie Scrofano and Mark Ghanimé was electric. 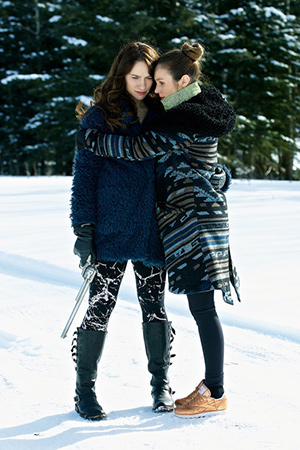 In the end of the episode, right after Wynonna shoots Jonas, is the moment we all had been waiting for. She decides she will be a single mother if she has to, and says, “I’m gonna raise this kid to be good and strong, and everything you’re not. You know, an Earp...Here’s to single motherhood.”

It makes her a hero as it is a victory moment to each and every one of the mothers out here fighting for their future of their children.

At the end of the episode Waverly reveals to Wynonna that she has doubts about being an Earp. I am interested to find out about Waverly’s search for her real family. Is she an Earp at all? Keep following the show to find out, as she may or may not be.