The episode begins just like a western battle when Doc holiday (Tim Rozon) and Agent Dolls (Shamier Anderson) find the BBD empty. They want to figure out what happened. They talk with Moody (Kevin Hanchard) and come to understand that BBD is done with them; they need to lay low and remain invisible. Moody gives them a file on the investigation by telling them, that the BBD they knew no longer exists, and that it was never a government agency.

A priest is killed by a one of the Widows as she enters the church. This scene reminds me of killing scenes from Buffy the Vampire Slayer.

Wynonna (Melanie Scrofano) tries to keep 'things as usual' like nothing's changed, but Waverly (Dominique Provost Chalkley) wants know how far along Wynonna is in her pregnancy, but she doesn't want to talk. Wynonna is feeling confused during her pregnancy. 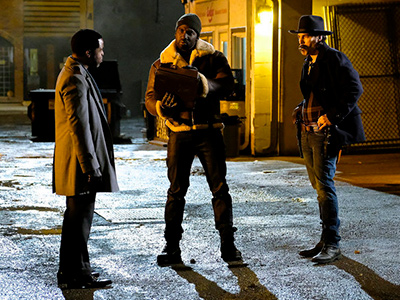 Wynonna is visiting Nicole at the police office, looking for new cases to solve. She asks Nicole (Katherine Barrell) if there's anything for her, giving some crazy examples of possible cases.

Waverly surprises both of them when she comes into the room, holding what seems to be a cup of coffee. Wynonna takes a sip, but spits it out, knowing it isn't coffee. Waverly says it's “Soothing Sunshine herbal tea,” having done it on purpose. It was funny to watch.

Wynonna has quite a sense of humor, and it shows in almost in every episode. One of my favorite lines in Friday's episode happens after a nun comes into the police office, her hands full of blood, informing them that her boss (the priest) was killed, and Wynonna says, "God really is dead."

Next we see the Gardner sisters, Mercedes (Dani Kind) and Beth (Meghan Heffern), trying get their hands on the location of the stone seals. They think maybe they will find something in Hypnos (Andreas Apergis), the clockmaker’s, mansion.

Tucker (Caleb Ellworth-Clark) is already ahead, knowing how to get what they want, which is more time to find the seals. He threatens the clockmaker by threatening his daughter, Poppy (Kiana Madeira).

Meanwhile, Wynonna, Dolls, Doc, and Waverly try to understand what the women in black/Widows are. Wynonna remembers seeing one in the condo when she thought it was Willa (Natalie Krill).

They come to the conclusion that there is more than one seal they are searching for.

Dolls and Doc come in, and Dolls tells the group that they are free agents now, which means nothing is off limits and they can pursue their own objectives.

Doc says, "Welcome to the club; I've been here a while. I'll show you what areas are off limits." The two both seem to be trying to impress Wynonna.

Jeremy is worried, but Wynonna prefers not to stand still and wants to do something about it. Wynonna has a great quote, describing herself as a "crazy chick" with a "big ass magic gun." 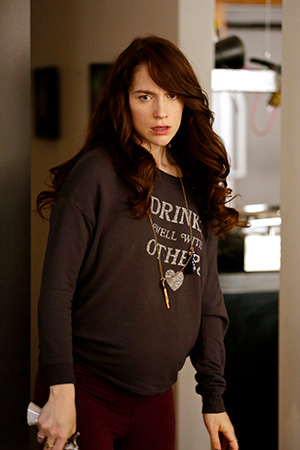 Wynonna still sees herself as strong and capable, able to do anything she wants, and no doubt she can. The writers of the show are doing wonderful work with her character.

We continue to see complex situations that Wynonna and Waverly have to deal with in this episode. No one knows Wynonna is pregnant except her sister. Waverly is more involved in Wynonna's life, and she's aware of the fact that Dolls has started to develop feeling for her sister. She knows Wynonna is not reading the signs when Dolls asks her out for coffee and tells her.

She also wants her to share with both of them that she is pregnant.

Wynonna politely tells her to let go of it, and she is the only one who will decide that.

Since the demon was controlling Waverly's body, she and Nicole hadn't found the time to talk about what happened. Waverly feels like she has to make that call.

Meanwhile, Jeremy is trying to solve the mystery of where the other seal is.

Then the moment all the Wayhaught fans have been waiting for: Waverly and Nicole have an intimate scene. It was touching how they spoke honestly to each other. It was a relief listening to the conversation. I felt happy for them. I am kind of falling for Nicole's personality. She is so sensitive and strong, and she won’t do anything that would hurt her girlfriend. It was beautiful. In fact the chemistry between Katherine and Dominique is out of the ordinary. Their love story has a huge impact on the LGBTQ community and millions of fans around the world.

Later that day Wynonna and Dolls do meet up. Dolls is willing to share his feelings with Wynonna and is trying to find the words, but she dodges the moment, making up excuses and talking nonstop.

Then something unusual happens. Everyone falls asleep before Dolls can say anything.

Wynonna wakes up to a city in silence when everyone is in the deep sleep. She realizes they must have slept for a long time, because she is months into her pregnancy. She hurries home and checks on Waverly.

Dolls is the first one to discover Wynonna's pregnancy, and he seems amazed by the news.

Later on, Wynonna, Waverly, Nicole, and Dolls are trying to find ways to stay awake, and they keep on searching for the reason the whole town is asleep. I loved the way Waverly describes it as "sleeping beauty on steroids."

The second one to find out about the pregnancy is Nicole. When Wynonna is by herself she has a beautiful moment touching her baby belly, unnoticed until Nicole walks in and sees her. They both are feeling awkward in the situation, and Nicole's confused, trying to find the right words to talk to her about it. She also asks if anyone's knows about it yet, other than Waverly. 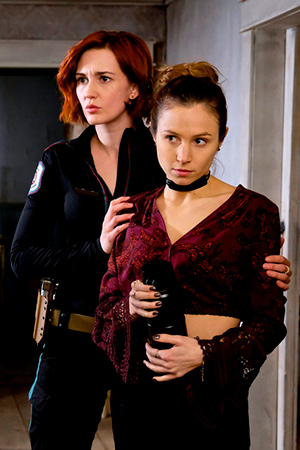 Nicole has been very respectful, and Wynonna thanks her for that. We’ve seen a growing developing relationship between Wynonna and Nicole in season two. They are working together, and the most important thing is they've learned to trust each other. It's wonderful to watch that. As we all knows they've both have something in common: they love and care about Waverly and will do anything to protect the town.

Wynonna, Dolls, and Nicole find the reason why the town fell asleep: it’s a spell that the clockmaker used for the Widows to give them more time. Dolls has discovered he is a sandman; if they kill him, no one will ever wake up.

A line I liked that Wynonna said to him was that if she couldn't shoot to kill, that she had other ways to bring on the pain.

He agrees to help if they rescue Poppy.

They are running out of time, and they need to find Tucker. Nicole has been tracking him for awhile now.

The coolest line in the episode was what Wynonna said to Nicole about bugging Tucker’s phone: "I will judge you. Judge you unexpectedly awesome."

Nicole finds Tucker in Waverly's bedroom. She warns him, but he refuses to listen, so she shoots him. He jumps out the window, afraid what the Widows will do to him.

In the end, Wynonna saves the day by killing the clockmaker, but they let Poppy go.

I think one of the most unexpected moments of the episode was when Jeremy (Varun Sarnga) reacted to Wynonna's pregnancy, surprised that it was a secret. That was so hilarious, the fact that he knew it all this time.

The last but the most important part to know is Wynonna was waiting to get a chance to tell Doc herself about the baby, as we assume he's the father of her child. That scene was full of emotions. Not one eye will stay dry after watching that.

The latest scene is Wynonna having a talk with her sister. She is emotional and worried about not knowing what's coming.

She keeps coming back to the Earp curse. She's sure that's the reason for her pregnancy, and she can't stand that she has no control of her life.

At the end, Waverly gives her sister Doc’s note that says he's "all in."

In a way, I've seen more Melanie than Wynonna in this scene with her sister. I think it was because of the natural way she was acting. It was moving, and I think any woman watching at home can identify with it. Melanie can do anything she wants, and it will end up being done the best way. The fans see it, and the cast members keep complimenting her in her role. 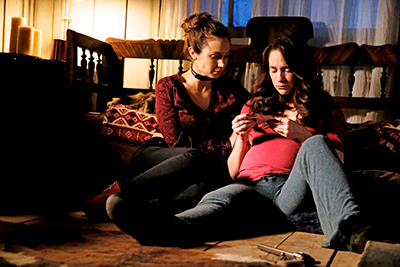 Season two is just the beginning of what we can and will see from Melanie Scrofano and all the cast of the show. Keep on watching to see what's up next for Wynonna now that everybody knows her secret, and see how all of the people around her help her deal with killing demons while being a mother.