First to refresh your memory from the last episode:

Waverly (Dominique Provost-Chalkley) wasn’t well, and we got to explore the demon through her unusual behavior, learning she wasn’t aware of what she had been doing.

There was also a moment where we saw Dominique’s talent as not only a dancer, but also a singer with a beautiful voice.

Nicole (Katherine Barrell) was the first one to realize something was wrong, because of Waverly’s explosive behavior, but Wynonna (Melanie Scrofano) started to notice it too.

As Waverly struggled with the evil inside of her, the demon became too weak to control her anymore, so it moved into her sister Wynonna, transferring the demon. 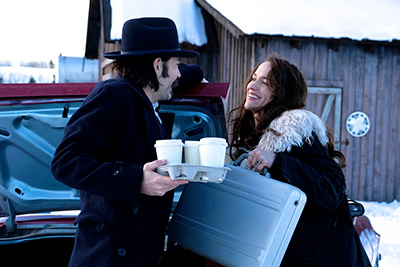 Last Friday, the first scene we see is Wynonna’s first moments as a demon as she is making a dead rat and bacon shake. It looked so real thanks to the special effects team.

I have to say I felt a bit scared for Waverly; I had no idea what was going to happen. The thought of it freaked me out, and a lot of it was to do with Melanie’s acting. I really related to Waverly’s fears. Waverly was trying to clear her thoughts and talk to her sister’s soul to fight back, knowing she’s still in there, as she had been in her position.

We continue to see Wynonna’s weirdness as Doc (Tim Rozon) arrives for a visit and asks about Waverly. She gives him the excuse that Waverly is not feeling well. I think he had a feeling at that moment that Wynonna wasn’t herself.

Later we see Wynonna, Doc, and Jeremy (Varun Saranga) examining the plate that is revealed to have a secret symbol of the Purgatory Voluntary Fire Hall under the paint.

Meanwhile, Dolls (Shamier Anderson) sees Waverly screaming for help tied up in the chair. He hesitates helping her, asking some questions to know it’s really her, remembering what happened back at the barn. Waverly is crying and apologizes to him, insisting that they need to hurry up and help Wynonna before she hurts anyone else. 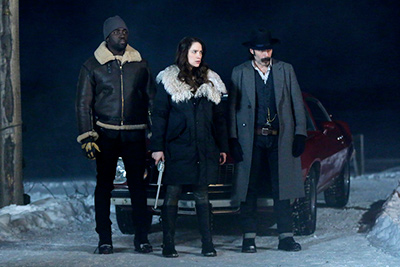 Later, Wynonna visits the Purgatory police department and talks to Nicole disrespectfully and even cruel about her relationship with her sister. One of my favorite moments in this episode was when Wynonna recognized her mistake, knowing Nicole doesn’t deserve it.

Wynonna and Doc talk at a diner. He’s trying to talk to her about the plate, trying to solve the case, and she changes the subject to them spending the day naked.

They go in the fire department to find out more, and Doc notices something is wrong when Wynonna pulls out a knife instead of Peacemaker, which she always carries with her.

They lock Wynonna up at the police department, and Waverly and the team discuss ways to get the demon out of her. They come up with the idea of taking a tissue sample, and Dolls takes on that mission and goes to take her finger. We clearly see that Dolls isn’t ready to do that as he really cares about Wynonna. This scene shows us more great acting skills from Melanie. I was literally hypnotized the way she was able to switch between normal Wynonna and possessed Wynonna, and I will remember that performance. 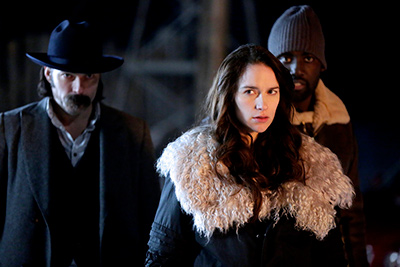 Another unusual part of the episode was Agent Lucado (Kate Drummond)’s head exploding. I didn’t see it coming; it was impressive.

Besides the sci-fi action, we also had beautiful moments with the Earp sisters. The first one is when Waverly sees Wynonna behind bars. She is heartbroken that she can’t help out her older sister, as possessed Wynonna is talking about the body she's in, saying that she is boring, but Waverly is not.

Immediately it is clear to Waverly that only Wynonna can defeat the demon. She transfers the goo back into herself. Now Wynonna knows what to do to save her sister.

There is also a big turn in the Wayhaught relationship with a moment when Wynonna, Doc, and Dolls go outside to stop the Order from killing a possessed Waverly. Waverly is in the barn with Nicole, who is worried and scared about what is going to happen, when Waverly manipulates her, telling her that the demon is in Wynonna. She makes her believe that Wynonna will physically hurt her.

Meanwhile Doc finds a way to appease the Order to stop them by giving them what they wanted, the plate. 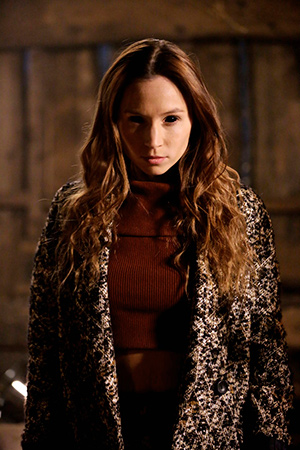 I have to admit, Waverly had been acting all creepy over the past seven weeks and it was so impressive, that you couldn’t blame Nicole for falling for that. Nicole had to choose a side and will do anything to protect her girlfriend, even if it means shooting Wynonna.

As Wynonna comes in, Nicole refuses to step away. We see two strong women fighting for their love of Waverly. They both care, but one of them has to let go.

Nicole is absolutely sure she is doing the right thing protecting Waverly, but Wynonna needs to get Waverly to drink the holy water.

The battle is decided in one sentence when Waverly orders Nicole to shoot Wynonna. Nicole knows that she would never tell her to do that. Knowing she’s not going to do shoot her sister, Waverly aggressively pushes her out of her way.

Wynonna can’t believe her eyes seeing Waverly hurting the woman she loves. She is trying to find a way to her sister’s soul and to get her to drink it. Waverly fights hard to take control of the demon inside and tells Wynonna to remember when she made her drink grape soda until it came out of her nose. That was all Wynonna needed. She pushes Waverly to the ground and forces her to drink it all.

All of a sudden, the black goo shoots out of Waverly’s mouth and turns into a creature that looks a bit like a cobra, and Wynonna kills it with Peacemaker.

I think Melanie, Dominique, and Katharine played the girl power in that moment well, and it shows us a bit more of the chemistry between the three characters.

We also discover at the end of the episode that all of Black Badge is now gone. 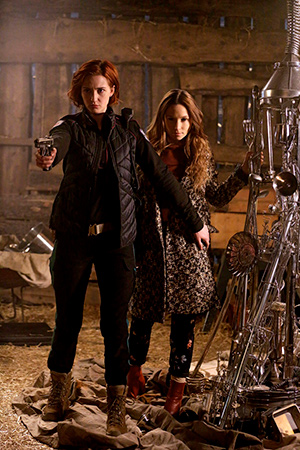 The genius of Friday’s episode is how crazy and talented the writers and actors are. Now don’t say I didn’t warn you, but the end of episode 2.05 reveals a secret that Wynonna didn’t even know yet. She’s pregnant (as we all know the script had some changes with the news that Melanie Scrofano was pregnant with her first child).

This is a new generation of what superheroes can look like in 2017. I have to say I’d never seen something like that before in the sci-fi genre. We are in a time where a pregnant woman be a superhero. Bravo!

I’m excited for Melanie Scrofano, and I can’t wait to find out with the viewers how the writers will pull it off with her character. I can’t wait for more. New episodes of season two of Wynonna Earp air Fridays on Syfy. Stay tuned.
Twitter
BotonSocial por: SocialEmpresa
Category: TV Reviews & Recaps