In tonight's episode of The Magicians, "Lesser Evils," with Kady (Jade Tailor) and Penny (Arjun Gupta)'s help, Julia (Stella Maeve) continues her quest to find Renard (Mackenzie Astin)'s son (Christopher Gorham), who is a demi-god, hoping he can help her kill his father.

Meanwhile, Quentin (Jason Ralph) tries to decide what to do with Alice (Olivia Taylor Dudley), as he can't hold on to her much longer without killing both of them. 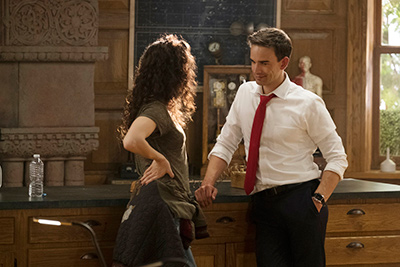 While back in Fillory, Eliot (Hale Appleman) and Margo (Summer Bishil) work to protect Fillory, but everything is working against them: many of their soldiers have deserted them since Julia killed the trees, and magic continues to be unstable because of the wellspring issues. Eliot is ready to rumble when the sloth suggests a one on one duel with the king of Loria (Leonard Roberts). Margo also has to make a decision that will affect Eliot and Fen (Brittany Curran).

"Lesser Evils" has a lot going on at once with the multiple storylines. For Julia's storyline, I'm happy to see it move forward, but I'm hoping this version of Julia doesn't last long. The story itself works, but I prefer Julia with her Shade in tact, so I'm hoping somehow that works itself out. I did, however, enjoy Gorham as Gaines. 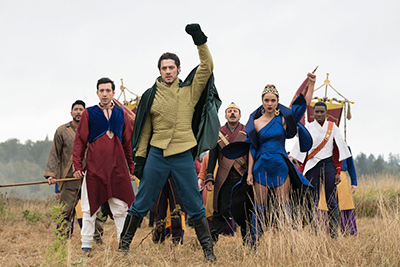 As for the Quentin/Alice storyline, I was really happy that they found a way to keep Dudley in the series as a Niffin as the two play well off of each other, and this episode is no different.

My favorite part of the episode, however, were the scenes between Appleman and Bishil. They always have the best lines and are the most fun to watch. The best part of the episode, is the musical scene before Eliot goes to war. I don't want to say much else to ruin the surprise, but it's it's fantastic and of course hilarious. This was really the highlight of the episode for me.