SciFi Vision | All Reviews | Television Reviews | Advance Review: Bones Draws to a Close with Pentultimate Episode "The Day in the Life"

Advance Review: Bones Draws to a Close with Pentultimate Episode "The Day in the Life"

Tonight FOX airs part one of the two-part series finale of Bones, "The Day in the Life." In the penultimate episode, where guest star Cyndi Lauper reprises her role, we start to see the trajectory of where each of the characters are headed. While there are happy moments for the group, there is a lot going on: Zach (Eric Milligan) heads to trial and Brennan (Emily Deschanel) testifies. Meanwhile, Aubrey (John Boyd) and Jessica (Laura Spencer) discuss their future together, and Angela (Michaela Conlin) reveals some big news. However, all of that moves to the wayside when they discover that Kovac (Gerald Celasco), who is again after Booth (David Boreanaz) and his family, has escaped prison, and they all must work to figure out his deadly plan, while Booth races to protect his family and friends from the threat of a bomb in the lab. 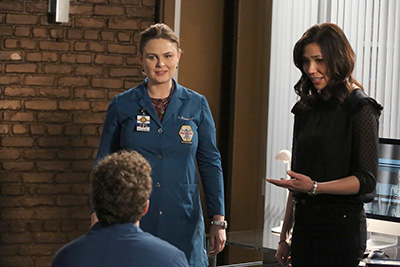 There were some great character moments in tonight's episode that I don't want to give away. It's nice to see the characters move closer to what their lives will likely be like after the series. Viewers get a glimpse into what may be to come. I enjoyed the change in format of the episode, and it really helped with that momentum. The beginning, lighter part of the episode also lures you into a false sense of security before everything goes downhill for the characters.

Although there wasn't a lot of actual "case" in the episode, in the fact that there wasn't much in the way of science and autopsies, it worked. I didn't miss that at all. The episode was packed and kept me on the edge of my seat, waiting to see what was coming at the end of the episode and beyond.