Tonight, Syfy premieres its newest competition series, Cosplay Melee, hosted by actress and self-described "super fan girl," Yvette Nicole Brown (The Odd Couple, Community). Each week on the hour-long series, four cosplayers will use their skills and creativity to build costumes, including props, for one-of-a-kind characters to be judged and hopefully win the weekly $10,000 prize. 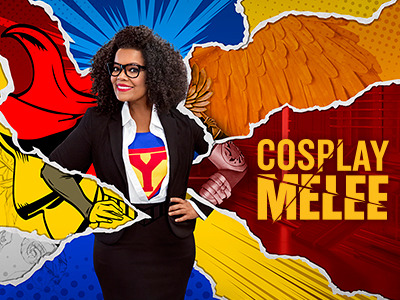 In the first round cosplayers have eight hours to create an initial piece of their costume, with only three moving on to the second and final round. They then have two days to finish their costumes and be judged on the runway.

In the premiere, the contestants are tasked with creating original characters inspired by their favorite space operas.

I really enjoyed Cosplay Melee. It's amazing to watch contestants build such creative costumes and pieces.

Brown, as I expected, is the perfect host and right in her element. 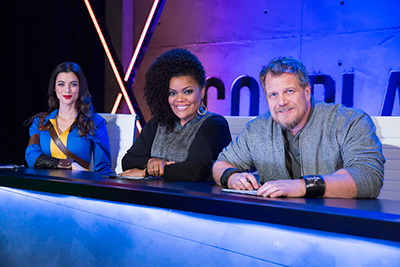 The structure of the show is very much like Face Off, which works really well. The main difference is that there are new contestants each week, but fans of the show will definitely get that vibe. The other difference, is that because there are only four contestants, they spend more time explaining how they are making the pieces, and you could really pick up a lot of cosplaying tips if you are so inclined.

All in all, Cosplay Melee is a really entertaining show that fits in well with Syfy’s programming. It’s a great new addition that is unique, yet brings what fans know and love into a new kick-ass competition.
Twitter
BotonSocial por: SocialEmpresa
Category: TV Reviews & Recaps