This week's episode of Dark Matter mostly focuses on Six (Roger Cross). Recently Six found out about his past from seeing Five's dream/vision. He was part of the rebel group, the Procyon Insurrection, who stole a destroyer ship from the Galactic Authority, and the leader of his crew, the General (Andrew Jackson), unbeknownst to him, planted a bomb that blew up the shuttle they left behind at takeoff, killing thousands at the space station. 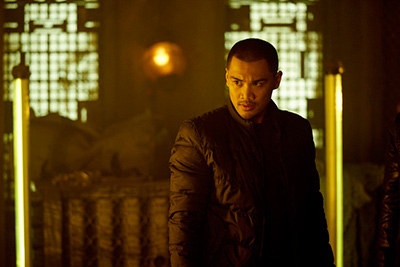 When the Raza crew make a stop at the next space station in their journey, it's time for Six to take his revenge. Six sneaks off to the Transit Transfer, where his clone can travel to the far reaches of space without ever leaving the pod himself.

I really enjoyed this episode, and I love the idea of the transit. I also was delighted to get to see more of Six's story and seeing him at the forefront, as we really haven't seen as much on him as some of the other characters as of yet. 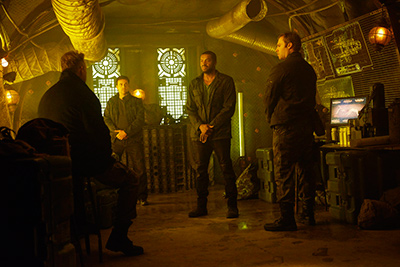 There were some really excellent moments between the other characters as well. I got a kick out of the group meal, and it was also great to see One (Marc Bendavid) and Four (Alex Mallari Jr.) spending some time together this episode. There was also another touching conversation between the Android (Zoie Palmer) and Five.

However, the things that stood out to me most about this episode were two surprises. The first was a cool unexpected reveal that included some secrets exposed, but the big shock is more backstory on two characters that will I'm sure become a big part of the story next week. I can't wait to see what happens next; I've really been pleased with the way the characters' backstories are slowly unfolding.
Twitter
BotonSocial por: SocialEmpresa
Category: TV Reviews & Recaps