May the 4th Be with You: Her Universe & Hot Topic

On May 4th, Star Wars fans celebrate George Lucas' revered space saga to show that the Force is truly everywhere. They refer to this day as "May the 4th Be With You." This year, clothing retailer, Hot Topic, is celebrating with the fans in a big way by offering, for the first time, new Star Wars fashion tops and hoodies from Her Universe, the female sci-fi genre line created by actress Ashley Eckstein, voice of Ahsoka Tano on the hit animated series Star Wars: The Clone Wars. The Star Wars By Her Universe line will debut on Hottopic.com and in select Hot Topic stores on May 4th with the first 50 customers who purchase a Her Universe item online at Hottopic.com receiving a FREE Star Wars Tote Bag. 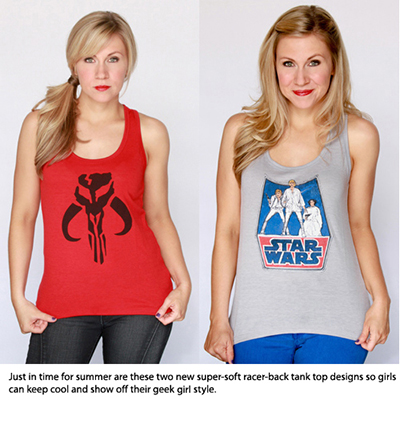 This will be the first time fans can get this exclusive new tote bag from Her Universe featuring a custom pattern using Star Wars symbols, a $20.00 value for free, as a gift to the first 50 fans. In addition, all day on May 4th Hottopic.com will be offering 20% off all Star Wars merchandise and will have special Star Wars features and content on their Hot Topic Facebook and Twitter pages.

"Hot Topic has always been my personal retailer of choice when it comes to fangirl fashion," said Her Universe founder Ashley Eckstein. "Together we would like to thank the fans for their loyalty and support on this special day with these new designs and promotions."

Close to half of all Star Wars fans are female which is why Hot Topic and Her Universe will have a number of new styles and designs for those fans to look "Geek Chic" from racer back tank tops and fashion tops to a unique Princess Leia hoodie. One of the most anticipated pieces is by popular Star Wars artist and designer, Denise Vasquez, whose stunning new Darth Vader dolman top utilizes design elements inspired by the Mexican holiday, Dia de los Muertos (Day of the Dead). "My T-shirt design for Her Universe was inspired by my love for my Latin culture and my love for Star Wars," said Vasquez. " I incorporated one of my favorite Darth Vader quotes in my design, which shows a positive message for Geek Girls like me who will wear this shirt with pride. 'La Fuerza es fuerte con este' ...'The Force Is Strong with this one!'

Her Universe was launched in 2009 by actress and entrepreneur Ashley Eckstein, and her partner, The Araca Group, known as one of the most innovative theatrical production and merchandise companies in the world. Her Universe was created to directly address the expanding market of female fans by entering into its first agreement with Lucas Licensing to develop and produce a line of female-centered Star Wars apparel and accessories. The success of that line was followed up with a collection for the Syfy network including such shows as Battlestar Galactica. Visit www.hottopic.com to purchase the new Her Universe Star Wars collection. You can learn more about Her Universe by going to www.heruniverse.com and by following Eckstein on Twitter and visiting the Her Universe Facebook page.
Twitter
BotonSocial por: SocialEmpresa
Category: News