The two prequel one-shot comics explore the backstories of the upcoming television show’s main characters, Rycroft Philostrate and Vignette Stonemoss, and are free for readers for the first week

LOS ANGELES, August 28, 2019 – In anticipation of the neo-Victorian fantasy television series Carnival Row—starring Orlando Bloom and Cara Delevingne—set to debut on Amazon Prime Video on Friday, August 30, Legendary Comics announced From the Dark and Sparrowhawk, two prequel one-shot comic book companions available today on comiXology, Amazon’s premier digital comics service. The two issues introduce readers to the show’s two main characters: the war-hardened investigator Rycroft Philostrate (Bloom) and faerie refugee Vignette Stonemoss (Delevingne), allowing readers to get a sneak peek into the histories of both protagonists prior to the launch of the highly-anticipated television series. Both issues are free to enjoy for the first week and $0.99 after September 4. For the latest Legendary Comics news and updates, follow: Facebook.com/LegendaryComics. 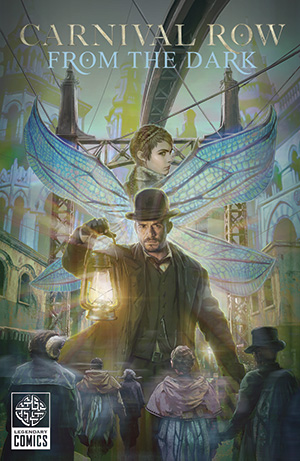 “Carnival Row is a rich world with intriguingly complex characters,” said Robert Napton, Senior Vice President of Legendary Comics. “We enjoyed working with the creative team to delve even further into both Philo and Vignette’s backstories offering viewers a chance to learn more about these enthralling characters, as well as get a deeper understanding of their motivations.”

“Legendary Comics developed both stories working in conjunction with the incredible Carnival Row showrunners and writing staff,” said Executive Producer Marc Guggenheim. “They’re not only both in-canon, but also Philo’s story actually ends with the cold open of Season One.”

From the Dark follows Rycroft Philostrate as he adjusts to his life in The Burgue, and the memories of his former life intertwine with a mystery that will take him through the strange city streets that he now calls home. A recent bomb attack has only intensified the situation. Can he find the people responsible before there is another explosion? From the Dark was written by C.M. Landrus and Charles Velasquez-Witoksy, with story by Travis Beacham, Marc Guggenheim, Kai Wu, Georgia Lee, Marc Bernadin, and Stephanie Smith. Illustration by Harvey M. Tolibao with HMT Studios’ Tristan Jurolan and Jhun Mar Tadong Entico, with colors by HMT Studios’ Kevin Tolibao and Kevin Anthony de Castro.

Sparrowhawk features Vignette and her fellow Fae, who after finding their homeland under attack, must fight and sacrifice in order to reach safety. Mythical powers only count for so much, when the other side has them too. Will they find the refuge they are looking for or does an even bigger threat wait for them?  Written by Jordan Crair, with story by Travis Beacham, Marc Guggenheim, Kai Wu, Georgia Lee, Marc Bernadin, and Stephanie Smith. Art by Giorgia Sposito, with colors by Triona Farrell. 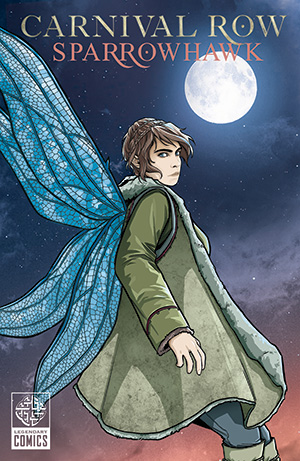 About the television series:
Orlando Bloom (Pirates of the Caribbean) and Cara Delevingne (Suicide Squad) star in Carnival Row, a series set in a Victorian fantasy world filled with mythological immigrant creatures whose exotic homelands were invaded by the empires of man. This growing population struggles to coexist with humans—forbidden to live, love, or fly with freedom. But even in darkness, hope lives, as a human detective, Rycroft Philostrate (Bloom), and a refugee faerie named Vignette Stonemoss (Delevingne) rekindle a dangerous affair despite an increasingly intolerant society. Vignette harbors a secret that endangers Philo’s world during his most important case yet: a string of gruesome murders threatening the uneasy peace of the Row.

Carnival Row is from Amazon Studios and Legendary Television, with Executive Producers Marc Guggenheim (Arrow, Eli Stone), René Echevarria (Star Trek, Teen Wolf, Castle, Medium), Jon Amiel (Outsiders), Bloom, and Travis Beacham (Pacific Rim, Clash of the Titans). Beacham’s A Killing on Carnival Row, on which the project is based, appeared on the very first installment of the Hollywood Blacklist in 2005.

About Legendary Comics:
Legendary Comics was born out of a passion for mythic entertainment, seeking out new talent and working with the best and the brightest in the industry to create transportive worlds, inspirational characters, and spectacular adventures that leap off the page. Founded in 2011, Legendary Comics has produced an exciting catalogue of original titles that continues to grow and evolve. From partnerships with industry legend Frank Miller to Grant Morrison’s Eisner-nominated Annihilator, Legendary Comics has a passion for innovative new stories, including Marc Guggenheim’s The Adventures of Jonas Quantum, the fantasy action series A Town Called Dragon, and Jessica Chobot and Erika Lewis’ hit webseries, Firebrand: The Initiation of Natali Presano. In addition to original titles, Legendary Comics also expands the scope of the cinematic universes of its parent company Legendary Entertainment, by bringing big-screen adventure exploding onto the comic book page. Working with the visionary filmmakers and the architects of Legendary’s Monsterverse, they have delivered the level of quality and authenticity our fans demand with New York Times best-sellers such as Godzilla: Awakening and Pacific Rim: Tales From Year Zero, and Skull Island: The Birth of Kong, to name a few. http://www.legendary.com/comics