NEW YORK, NY – October 5, 2018 –Sundance Now, AMC Networks’ direct-to-consumer SVOD service curated with high-quality dramas and crime thrillers, and SHUDDER, the leading premium streaming service for thriller, suspense and horror, announced today that the entire season of the captivating drama “A Discovery of Witches” will premiere simultaneously on both platforms Thursday, January 17th, 2019 in the U.S. and Canada. 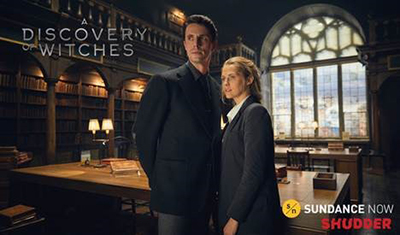 Based on the bestselling and critically-acclaimed novel of the same name by Deborah Harkness, “A Discovery of Witches” is an enchanting modern-day love story set against the backdrop of Oxford academic life. Historian Diana Bishop (Palmer), a reluctant witch denying her heritage, accidently discovers a long-lost bewitched manuscript in Oxford’s Bodleian Library, and is immediately thrown into the heart of a dangerous underworld. On her journey, she finds herself tossed into the path of enigmatic vampire and geneticist, Matthew Clairmont (Goode), who hides a dark family secret.

The series, filmed in the UK at Wolf Studios Wales and on location in Oxford and Venice, was adapted for screen by writer Kate Brooke (“Mr. Selfridge”), who also serves as executive producer. Co-founders of Bad Wolf, Jane Tranter (“Doctor Who,” “The Night Of”) and Julie Gardner (“Doctor Who,” “The Night Of”) and Lachlan MacKinnon are executive producers along with author Deborah Harkness. Juan Carlos Medina (Painless) directs.

About Sundance Now:
Sundance Now is AMC Networks’ premium streaming service, offering original and exclusive dramas, comedies, and true crime series, in addition to award-winning movies from every genre, including foreign-language and documentary features – all streaming commercial-free. Built on the Sundance legacy and curated by acclaimed filmmakers and cultural icons, Sundance Now is proud to present an extensive array of entertainment for a passionate and intellectually curious audience.

About Shudder:
AMC Networks’ SHUDDER is a premium streaming video service, super-serving fans of all degrees with the best selection in genre entertainment, covering thrillers, suspense, and horror. SHUDDER’s expanding library of film, TV series, and originals is available in the US, Canada, UK, Ireland, and Germany on most streaming devices for 4.99/month or 49.99/year. To experience SHUDDER commitment-free for 7 days, visit www.shudder.com.