Advance Preview: A Discovery of Witches Season Two is Just as Magical

Tonight season two of A Discovery of Witches, based on novels of the same name by Deborah Harkness, premieres on Sundance Now and Shutter. The new season picks up where the last left off: Diana (Teresa Palmer) and Matthew (Matthew Goode) have timewalked in order to hide from Gerbert (Trevor Eve) and Knox (Owen Teale) somewhere in time. They arrive in 1590 Elizabethan London where they continue to search for The Book of Life while also trying to find Diana a powerful witch willing to teach her how to control her magic.

While Diana struggles to control her powers, Matthew must enter his old dangerous life as spy Matthew Roydon, while not losing himself to his darker past. Can Diana accept his darkest secrets, and can Matthew control his jealousy and reawakened rage? 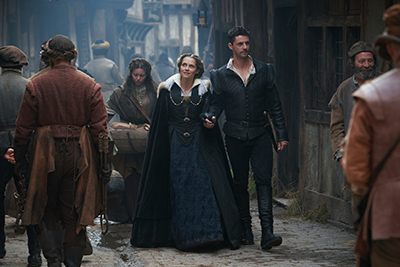 Back in the present day, Diana’s aunts, Sarah (Alex Kingston) and Em (Valarie Pettiford) stay at Sept-Tours with a reluctant Ysabeau. Meanwhile, back at Oxford, Marcus (Edward Bluemel), who has now been appointed Grand Master of the Knights of Lazarus by Matthew, and Miriam (Aiysha Hart) are tasked with protecting daemons Nathaniel (Daniel Ezra) and the pregnant Sophie (Aisling Loftus). Marcus also gets an unexpected and welcome surprise in the form of human Phoebe Taylor (Adele Leonce).

Of course, Gerbert, Knox, and Satu (Malin Buska) are still doing everything they can to find clues to Diana and Matthew’s whereabouts and the Book of Life, while Domenico (Gregg Chillin) realizes that violent murders in the area may be connected. Will they find a way to destroy the de Clermont family?

I was very excited to get the first seven episodes of season two to review, and the first thing I want to talk about is how gorgeous the show looks. The locations and sets in 1950 are amazing and do such a fantastic job bringing you into Matthew and Diana’s world. The costumes are also magnificent and lend to the realistic atmosphere. I also want to mention that the effects used for Diana’s magic are spectacular, especially when she completes a few of the knots on her first new spell, which I don’t want to spoil for those who haven’t read the books. It was also interesting to see the 1590’s version of Sept-Tours. 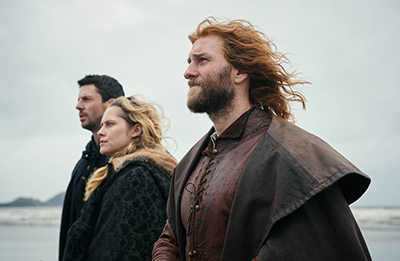 It was nice to see Diana out of her element. I can only imagine what it would be like to be whisked off to the past and having to adjust to such a different lifestyle. At the same time, however, she was also in her element, as a historian, enjoying her encounters with historical figures and getting to experience things she could only read about. One of my favorite things about this season is a lot of her responses to some of the people she meets. She always speaks her mind, for better or worse.

This season we get to see different sides of Matthew as he attempts to step back into his old shoes. The vampire and man he was before was quite violent and often uncaring, which they both need to come to terms with. He can also be very possessive and angry which he sometimes reverts to, and Diana’s not having it.

It was also great to see the two dealing with their relationship and the ups and downs their journeys take them on, both metaphorically and literally. There is a lot that neither are prepared for that they encounter.

There are the historical figures I mentioned, of course, that the two must interact with along the way, but also new characters who join the story. One of those on the forefront is Kit Marlowe (Tom Hughes), who I very much enjoyed. The two I was most excited to see were Gallowglass (Steven Cree), Matthew’s nephew, and Philippe (James Purefoy), Matthew’s father. I was not disappointed. Cree was a lot of fun, and Purefoy brought emotional and quite moving scenes, which were some of my favorites. 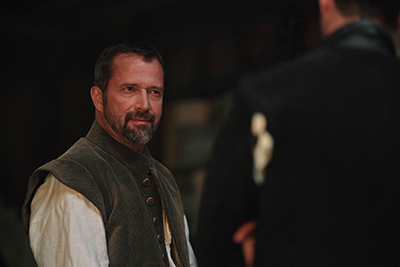 I was happy that we did get to see what was going on in present time with the rest of the group in this set of episodes, although I would have liked to have seen more. At the same time, I also would have not wanted to miss what was going on in 1590 where all the action is happening. Perhaps dividing up the scenes differently between episodes may have helped.

I really loved the start to the season, though to me the premiere seemed a bit slowed down with the amount of information. It might just be getting back to remembering everything going on in their complex world, but the other six flowed much better for me.

There are so many moments from the book that were faithfully recreated that I can’t wait to get to talk about. I blew through six of the episodes in one sitting.

Both fans of the series, as well as the novels, will not be disappointed. The season so far has done an excellent job of bringing the books to life, and I can’t wait to view the rest of the season.
Twitter
BotonSocial por: SocialEmpresa
Category: TV Reviews & Recaps