Book Review: The Bingewatcher's Guide to Doctor Who

Published: Monday, 15 June 2020 15:06 | Written by SciFi Vision
**Due to an error this article was somehow not set to published. It was originally written back in March**

Riverdale Avenue Books has recently started a new line of books on television and movies, with the first one in the series being The Bingewatcher’s Guide to Doctor Who by Mackenzie Flohr. With Doctor Who being my favorite show currently on television and given the fact that the twelfth season just finished airing, I was really excited to receive the book for review.

The book focuses mostly on season eleven, but it works well as a recap, and it has a lot of other information in it.

The book is divided into a bunch of different sections. The beginning gives a history on how the series came to be and evolve, as well as how the author became an fan and how it inspired her. It also talks about how Chris Chibnall changed the series, including of course, the introduction of Jodie Whittaker as the first female Doctor. 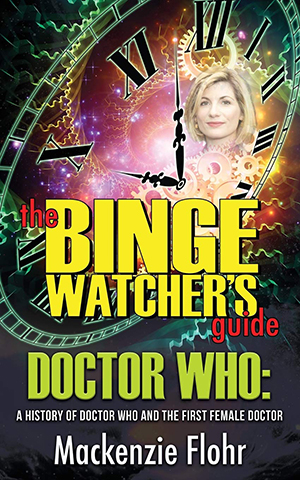 Following is some information on the new Doctor and her companions, Ryan (Tosin Cole), Graham (Bradley Walsh), and Yaz (Mandip Gill), the all-new sonic screwdriver, the changes in the TARDIS and costume designs, enemies from season eleven, and more.

The next big chunk of the book is the season eleven episode guide. It includes summaries along with the author’s reviews of each episode, including behind the scenes tidbits. The New Year special is also included.

The following section talks about the #NotMyDoctor movement and how the first female Doctor was received by the audience, as well as some discussion of what was to come in season twelve (and after), including rumors.

Lastly are appendices which list things such as Doctor Who novels and games.

I very much enjoyed Flohr’s book, although it is by no means exhaustive on all things Who (not that a single book ever could be), but I’m not sure I would have titled it a Binge Watcher’s guide, but I digress. What it is for the most part is a companion to season eleven. The actual episode guide for the season is less than a quarter of the book, but that’s okay. This book, at least to me, serves more as an overview of the episodes, friends, enemies, and more of season eleven. If you want to catch up on an episode or refresh your memory for season eleven, it more than does the trick.

The section of interviews is a mixed bag and will likely be interesting to some but not to others. The people featured are involved in working on things such as merchandise for the show like the book series, are part of fan films, or are people who run podcasts or conventions. The interviews are fun to read, and I can appreciate them as a journalist, but I suspect some people might prefer to hear from those involved directly with the series. It really depends on the reader.

The Binge Watcher’s Guide to Doctor Who is an excellent book for both veteran Whovians and fans new to the series. There’s enough there for new watchers to get a look into the history and world of Doctor Who and hopefully get just enough of a taste to want to know more. If you are a fan of the show and have seen all the episodes, it doesn’t really contain anything new that you probably don’t already know, but it’s still an entertaining read and worth the purchase.
Twitter
BotonSocial por: SocialEmpresa
Category: Book Reviews