Thursday, Big Sky returns for season two to ABC. At the end of season one, Jenny Hoyt (Katheryn Winnick) was shot by one of Ronald (Brian Geraghty)’s accomplice’s before he and Scarlet (Anja Savcic) took off, and Cassie Dewell (Kylie Bunbury) got in a police cruiser and took off after him.

Season two picks up after this cliffhanger, but also introduces a new storyline, dealing with a car wreck outside of Helena Montana and some unsuspecting teens who get more than they bargained for.

Recently, Winnick and Bunbury, along with John Carroll Lynch and new cast members Janina Gavankar and Logan Marshall-Green, as well as executive producer, Elwood Reid, took part in a panel as part of the TCA summer press tour to talk about the new season.

According to Reid, there will be one main mystery this season that keeps twisting and turning, as well as new villains. “We're going to sort of tackle one big mystery, and that mystery is going to pull in all of our characters that find themselves in the wake of last season…In the midst of that storyline, a new story jumps off…It's about some kids that happen to stumble upon a very violent and bloody accident in which drugs and money are taken from the crime scene. That brings the attention of our new baddie this year, who's going to bring in some more baddies, a character named Ren, played by Janina Gavankar. She's going to come and try to mess things up ‑ as you do in Big Sky.”

He said that Ren is really the one the characters have to be worried about this season, but he also said nothing is simple or straight. “…I think part of the fun in the storytelling this season is going to be how we mix up the personal lives of our leads, Cassie and Jenny, with the main storyline. That's one of the things, the full season order that we have this year is going to allow [us] to do, is jump into these personal lives and see how they intermix.” 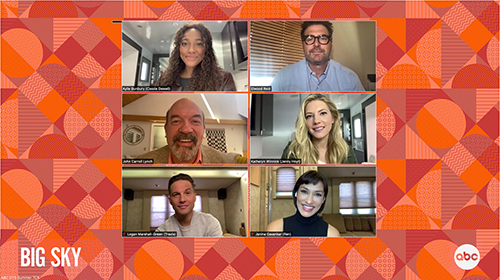 Another new character this season is Travis, played by Logan Marshall-Green. Reid said that he “represents something from Jenny's past and really shakes her up. And, again, much like Janina's character, Ren, we're not quite sure what side of the fence he's on.”

The producer added that a character from Cassie’s past would also be coming into play and would “shake up her world quite violently.”

While last season there was some animosity between the two lead female characters, their relationship has shifted a bit this season after her Jenny was shot. Winnick told the press that the two share a strong bond. “We have mutual respect for each other as private eye agents, but also, now that I got shot at the end of season one, that adds a whole new different dynamic and stakes in terms of our relationship.”

Winnick also talked about other ways Jenny has changed since being shot. “You'll see a new version of her, a 2.0 version, and that is reflective in terms of her choices, in terms of work, and her relationship with [Cassie] and new partnerships and also on her own purpose and her own meaning of what she wants if she has a second chance and how to get it.”

Bunbury, on the other hand, talked about Cassie’s obsession with catching Ronald. “I feel like for Cassie, her focus is always the work and definitely chasing Ronald; she's been obsessed with it, and I think what we're going to see this season, is that might cause some danger for her own family. So, with that, how can she take a step back and focus on protecting her family, and what does that look like? She's dealt with a lot of unresolved trauma in her life. So, I think we're going to be able to explore how she actually copes with the things that she internalizes so much.”

The big news of the panel, however, was when John Carroll Lynch showed up to confirm that he would be returning to Big Sky in season two to play the twin of his season one character, Rick Legarski, who was killed at the end of the season. Lynch was happy to be back. “I'm really excited to be back. This cast got very close last year. We really enjoyed working with each other, and when you get beaten to death with a hammer, you likely think that's the last time you're going to hang out with the family, so it's a very exciting opportunity to come back and be part of Elwood's wonderful version of this show. It's an exciting opportunity.”

Be sure to tune in to Big Sky Thursday night on ABC.
Twitter
BotonSocial por: SocialEmpresa
Category: Interviews