Servant, which will soon premiere its second season finale on Apple+, is a psychological thriller that follows wife and husband Dorothy (Lauren Ambrose) and Sean Turner (Toby Kebbell) who have tragically lost their son. Unable to cope with Jericho’s death, Dorothy is given a therapy doll which her husband and brother, Julian (Rupert Grint), let her believe is her real son.

In season one, Dorothy hires a nanny, Leanne (Nell Tiger Free), to care for Jericho and the ruse continues, however, suddenly, somehow, there’s a real baby. At the end of season one, Jericho and Leanne go missing, and Dorothy believes a cult is responsible. In season two, the search for Jericho continues and brings even more possible supernatural events. The series has already been renewed for a third season.

Executive producer, M. Night Shyamalan, who also directed some of the episodes, along with series stars Ambrose, Kebbell, Free, and Grint, recently talked to journalists in a panel as part of the TCA press tour in which SciFi Vision took part.

This season, there were some really funny scenes between Boris McGiver, who plays George, Leanne’s uncle, and Grint and Kebbell, which involves the two characters dragging around an unconscious George. 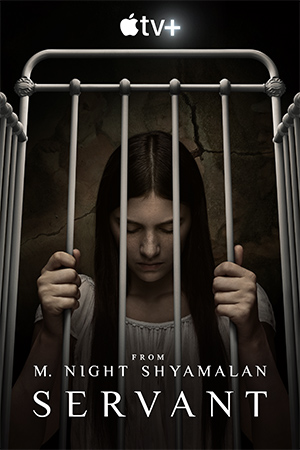 Shyamalan talked to SciFi Vision about creating those scenes. “The comedy in our show is something that we're all very proud of and how to incorporate it. All of them are such amazing physical actors, which is rare, to be able to be internal and truthful actors, but all four of them are so strong physically that I can come up with all this physicality for them and in our little set that the whole show takes place. And as I come up with each thing for each episode, even Episode 7, which is right after that episode, and I was like, ‘Oh, what about we do like a Weekend at Bernie’s episode where the boys are tracking in kind of a comatose Uncle George around the house?’ Just even me pitching it and coming up [with it], it was funny. [I was] thinking of everybody, and of Dorothy going, ‘What are you doing?  He can’t sit here,’ and imagining what would happen, and being right on the line of broad comedy with all of them.”

The actors also talked to the site about filming those scenes. Kebbell told SciFi Vision, “It's always a lot of fun. Boris is such an excellent actor, and he's created this fantastic character of Uncle George. We're always happy to work with him.  That scene, specifically, where he quotes Deuteronomy, and then Rupert quotes Guns N' Roses, I had the giggles. Honestly, it’s the most serious scene…it was very heavy and dramatic.  I had the giggles so hard; I couldn't stop. Lauren is a great kind of measuring stick for that, and she gives me kind of a motherly stare, and I'm like, ‘Sorry, I'll get back to it.’”

Grint agreed that it was a hard scene for that reason, but he enjoyed it. “I love working with Boris. He’s hilarious, and I love the episode, because it gives us a real chance to do a lot of physical comedy, and he’s just a hilarious man. We had a lot of fun.”

Free also joked that they get in trouble.

It is such an intense show sometimes that they do need to find a way to keep it light. According to Ambrose, “It’s just such a fabulous group of talented individuals in every department, certainly, the cast and the writing and the directors and everything, but in every department.  So, it’s this wonderful, creative environment, and inevitably, because we're dealing with such intense material, we have to, as human beings just to survive it, find ways to laugh. Making a TV show is often just problem solving. It's like, ‘Okay how are we going to do this bit of physical comedy in this tiny space with this camera?’ And I must say, Boris McGiver had recently had a knee surgery and was doing all that crazy, crazy physical comedy.  So, especially, kudos to him. I guess it’s just the collaboration and the teamwork that makes it fulfilling and a great work environment. So, yeah, there's lots of laughter.”

On a more serious note, Shyamalan talked about the deeper message of the series. “…The thing that I'm trying to work out, and, I guess, for me, the show is about me trying to understand how there could be a benevolent force in the world, in the universe, if things like what happened to Dorothy happened? And that incident that we wrote about Dorothy was from a documentary that I saw of a man who forgot his child was in the back seat, just a good dude, just a dad, and [it was] so traumatic. It created this fear of, ‘Does anything have meaning?’ That's the drive underneath all of this. For me to even just have four people discuss that and figure this out and just ask the right questions, we don't have to give an answer. The struggle is the part that connects us all. It’s underneath it…It’s the thing that makes this, on top of the great writing and the great acting and all of the suspense and the humor and all of the cinema in it, underneath it is me kind of just having a conversation with you guys about, ‘How do we process things that feel meaningless and find meaning in our lives?’” 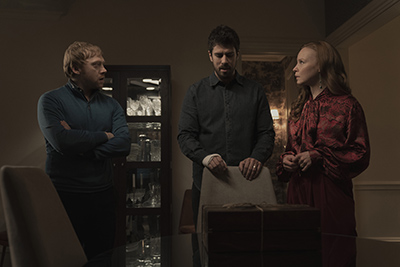 The actors also talked about how they can relate to their characters. According to Kebbell, “It’s just a process of trying to make it as familiar as you can, and then it kind of flips on you and suddenly you’re like, ‘Oh, that’s just what I would do.’  You’re like, ‘How did that happen?’  So, it’s funny, but, for me, with Sean, I find it so useful…that sense of humor…Night’s just hilarious. He’s super quick-witted. So, it’s those things I’m so glad that are present; they allow you to sort of exorcise those demons.”

Free also talked about connecting with Leanne. “For me, Leanne and I are a really similar age, and at the end of the day, I think a really big color and note to Leanne is the fact that she’s just a young woman kind of finding her footing, and whether she’s this ethereal creature or not, she’s still just a girl who is kind of finding out who she is as a woman, and I guess I’m still in that zone, too. I’m still trying to figure out exactly who I am and what type of woman and girl I want to be in this industry and just in the world. So, I guess that I really resonate with her on that element.”

Grint added, “There’s so much freedom with Julian. I'm really enjoying kind of unraveling, and because I think he lives outside of the house, he has a very different orbit.  So, I’m really enjoying playing him.

“Also, having a baby kind of midseason really changed my perspective on everything. It’s probably not the best show to do after that, becoming a dad [laughs], but, no, it really actually helped me to get into that mind of just that love. It’s a very new and very powerful kind of feeling. I found that very helpful, I think, for this season.”

For more, be sure to check out Servant on Apple+.
Twitter
BotonSocial por: SocialEmpresa
Category: Interviews