Exclusive: Wrenn Schmidt and Krys Marshall Talk Season 2 of For All Mankind

In season two, For All Mankind took a ten-year leap into the 1980s. Three episodes in, the time jump is paying off narratively as characters realize that what happens on the moon doesn’t stay on the moon. The women of NASA have made huge sacrifices to get to Jamestown, and it’s time to pay the price. Both Danielle (Krys Marshall) and Margo (Wrenn Schmidt) are still living with the consequences of their actions back in 1974.

SciFi Vision spoke with stars Schmidt and Marshall about what viewers can expect this season as Margo visits an old friend and Dani sets her sights on the moon.

Be sure to watch For All Mankind on Apple TV+, and you can also read the full transcript of the interview following the video.


Zoom Interview
For All Mankind
Wrenn Schmidt and Krys Marshall

SCIFI VISION:   I wanted to talk a little bit about relationships and how the things we saw that happened ten years ago are reverberating this season.

Krys, I'd like to talk about Danielle's relationship with Gordo (Michael Dorman). These women have made incredible sacrifices, but Danielle seems really at peace with what she's done. Gordo, however, is a mess. Gordo seems like he can't deal with what Danielle did for him. He's really struggling, and yet they remain close friends. I wonder if you could talk about whether we're going to see that play out more in season two as Danielle is determined to move past that sacrifice and Gordo can't. 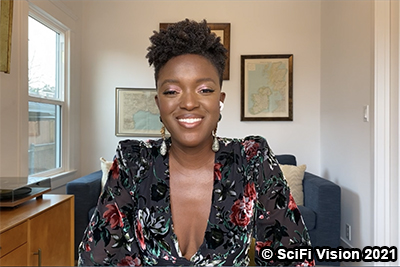 KRYS MARSHALL:   I think that the relationship between Dani and Gordo is totally extraordinary and also totally ordinary. I think we all have people in our lives who we hate to love and love to hate. I think that she sees him like family. You know, these guys are spending, I think it was, 144 days in our story on the lunar surface, and in real life it was actually Krys, Michael, and Joel [Kinnaman] shooting the show for fourteen hours a day for two weeks straight. So, I know intimately what that feeling is like, of being in such close quarters with someone, where at some points, you just want to kiss them on the lips, and at some points, you just want to punch them in the face. So, that relationship is complicated and interesting and also really natural and normal.

So, I think for Gordo, there's a real humiliation [in] being rescued by Danielle, and I think we see him struggle to make peace with that throughout season two. For Danielle, this sacrifice that she's made, although she knew going into it that it would be a doozy, she's seeing the repercussions for that sacrifice a decade later. So, we're watching her have to fight for her own reputation, fight to protect her honor, fight to create her own space in this world and fight to be a commander.

SCIFI VISION:   Great, thanks. And Wrenn, certainly Margo has made sacrifices. She basically has no life outside NASA, no friends, doesn't even go to her apartment, but Margo sacrificed somebody else, also...We saw her turn her back on Aleida and sacrifice a teenager. Maybe I shouldn't say sacrifice, but she turned her back [on her], and there have been repercussions for Aleida. Now, [without spoiling], I think viewers know that the adult Aleida (Coral Peña) has been cast, and is going to be in this season. Can you talk a little bit about what that has meant to Margo and what it might mean when they come back into each other's lives? 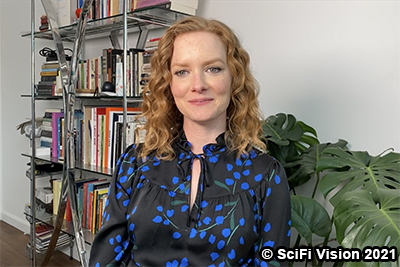 WRENN SCHMIDT:  I feel like it's interesting, because I tangentially come across comments about Margo and Aleida and how people felt about that scene. At the time, when I was reading it, I certainly [could] see that point of view, but I think I also looked at it as Margo is responsible for all of these people that are currently in space and their lives are at stake. This is her responsibility, and as much as she would absolutely love to, in some ways, drop everything and take care of this young girl, because she knows what it feels like to be left out in the cold by an adult who you really look up to, I also think that for her, it's kind of like, "You know what my job is. You know what my responsibilities are. It's kind of crazy that you're asking less of me right now."

So, that's the way that I walked into that scene. I really felt like both of those things have to be present. Her heart both has to be breaking, because the timing just cannot be worse, and at the same time, Margo is so dedicated to the mission and the safety of the people that are in space that I also think for her there's a little bit of a barb there too, which I completely understand the audience not maybe seeing, because she's the adult, and Aleida is still a kid. But it was a lot of fun to explore what that guilt is like for Margo in the second season and how it's shaped her, and, for lack of a better way of putting [it], how she might repair that.
Twitter
BotonSocial por: SocialEmpresa
Category: Interviews