Today Hulu dropped its film Books of Blood, based on the horror anthology of the same name by Clive Barker. The film, directed by Brannon Braga, is essentially three stories woven into one. The second storyline revolves around the characters of Mary, played by Anna Friel, and Simon, played by Rafi Gavron. In the story, Mary is a grieving mother who has lost her son, and Simon claims to be able to speak to the dead.

The stars recently took part in a press junket for the movie, which SciFi Vision was able to attend. They talked about working on the project, how they connected to it, and more.

Be sure to check out the full transcript following the video, and stay tuned with more interviews from the film. 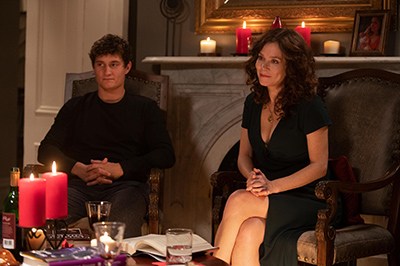 SCIFI VISION:  Thanks guys for talking to me. I really appreciate it. I watched the film. I liked it. It scared the crap out of me, but I liked it a lot. [laughs]

ANNA FRIEL:  Which parts did you find the most scary?

SCIFI VISION:  Actually, I think the first part, without spoiling it, what happens in that storyline.

For both you, how did you first get involved in the project?

ANNA FRIEL:  I got sent the script and talked to Brannon [Braga]. I liked the tone he wanted to set, and it sounded unique and individual. I liked all the company that we're working for and the idea of working with Rafi.

RAFI GAVRON:  I feel the same way. I got sent a script, and I didn't have a job, and I needed a job. So, I got this job, and I felt very lucky about that. And once I found out Anna was doing it, I agreed to do it.

A lot of this gets pretty dark. Was it hard to step into that and to move away from it? I found a lot of it very, very creepy on all angles.

ANNA FRIEL:  I could relate to Britt [Robertson]'s character, who has the sensory issues that she gets; everything is accentuated. My daughter often talks about that, and I think I have a little bit of it, and so I could relate to that element.

Also, I'm a big believer in justice, and I don't like people who prey on the vulnerable. So, it was nice to tell [my character]’s story. It was more about telling the psychological thriller element of it as opposed to the guts, gore, and horror.

RAFI GAVRON:  I feel a lot of pain a lot of the time, and so I [laughs] didn't really have an issue with going into that or being part of that.

I found the makeup that I was wearing quite restricting, and that was actually scarier than anything else. The acting side of it and the emotions were the easy bit as far as I'm concerned. Not that I did a good job as an actor, but at least me getting into it and enjoying it and trying my best I found a bit seamless.

Rafi, can you can you talk more about the special effects? It looks very uncomfortable, but it looks really cool.

RAFI GAVRON:  Yeah, so that was a couple hundred thousand dollars worth of makeup. It was one of the best prosthetic teams in the world. They are amazing and the kindest people and very patient with me, because it was seven hours of makeup in the morning. I had to wake up at four, and then we only got to shoot for about six or seven hours, which was very kind of them, because it was so uncomfortable. It was a latex suit that covered my whole body; I couldn't really go to the bathroom properly. It suffocated my body, because my skin couldn't breathe, really, and then it got really cold and really hot. So, Anna fed me Snickers bars the whole time, and I was grumpy the whole time, but it was so worth it because of the way it looks.

Anna, I’ll ask you, what did you find the most challenging about this role?

ANNA FRIEL:  Putting up with Rafi's grumpiness when he wore the suit. [laughs] No, because we've got really good banter and can laugh and talk all the time; we'd crack up on set. When he wore the suit, there was no talking to Rafi.

ANNA FRIEL: So, that was challenging, but the rest of it was pretty much a breeze, because Brannon is very, very focused and concentrated on the monitor. He'd know exactly what he wanted and would say, “There's your character; go with it." It was very, very collaborative and supportive, so it made it quite a joy.

[We had] a brilliant and a wonderful crew out in Nova Scotia and a fantastic director of photography.

ANNA FRIEL: I thought the DP was really good, and not to have to rely on CGI for the whole time. But again, the story is a bit retro, to go back to the old way of doing things, actually using great creative talent. 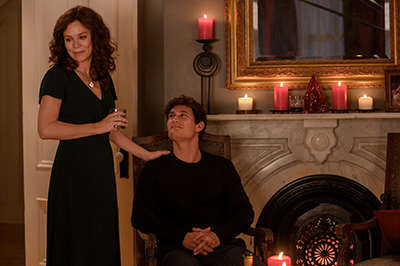 Yeah, that was a really good part of it.

RAFI GAVRON:  I wouldn't say I'm the most manipulative person, but I'd like to think that I'm pretty in tune with emotions, because I never went to school, but I've done a lot of talk therapy, about 5000 hours. So, I think that was a part of it. I don't know if you know who Darren Brown is, but one of his things is that he's very in tune with people, and that's how he gets things right. I would like to think that I'm good at that, and that's probably how it worked for the role and the reason I got the role.

ANNA FRIEL:  Grace, my daughter, was fifteen a few months back, and she had a call from David Blaine. It made me think about all of this, about how magic can work and how we can be so easily taken in.

Do either of you have a particular favorite scene that you can talk about without completely spoiling everything? [laughs]

RAFI GAVRON:  I had a scene with Anna - All my scenes with Anna are what made me do this movie, and I enjoyed all of them, but there was a scene where I fall off the wagon as a sober person. It's the kind of start of the redemption that she gets, even though she's compassionate about me falling off the wagon. I admit some things, there is a twist, and we were allowed to get physical, and we were allowed to really go at each other. I think that really played into how decent, I should say, that our part was.

Do you have anything to add?

ANNA FRIEL:  I enjoyed filming that scene the most as well, because it was the most challenging, but I also liked having to do a really creepy old voice towards the end when you skip a little bit of time.

Etienne [Kellici], who plays the little boy, was a joy to work with, because when you work with children, they are just so full of wonder [laughs], because they've not been on hundreds of film sets, and [he was] so excited at what he was doing. To watch his concentration and to will him along was really a lovely experience.

Anna, did you read any of the book? This one was one of the [stories] that was kind of based on the original.

ANNA FRIEL:  Not until after reading the script, because sometimes you can get distracted or you can get frustrated thinking, "Oh, why is that little bit of the book not in it? Why can't I do that scene?"  I think you've got to be careful when something gets translated to a book, but I want to read more Clive Barker now.

RAFI GAVRON:  I've never read the book, nor this [story]. I like to stay away from the originals whenever I do anything and just do my take on it. But I have a lot of respect for Barker. I do understand the Hellraiser thing, and I've seen bits of it. One of the reasons I did the movie is really because of the way he wrote the stories and how he does things. So, big respect to him.

Did either of you talk to Clive? Rafi, you can go.

RAFI GAVRON:  No, no, never spoke to him.

What about you, Anna? No?

ANNA FRIEL:  Well, I was hoping today on this virtual junket that we'd actually get to.

RAFI GAVRON:  Yes, she froze. She was hoping to meet him today, but that hasn't happened either. She's never met him.

Okay, well, that answers the question. Hopefully she'll come back.

Since this is a horror movie, what is it that frightens you either in watching scary stuff, or just in general in your life? 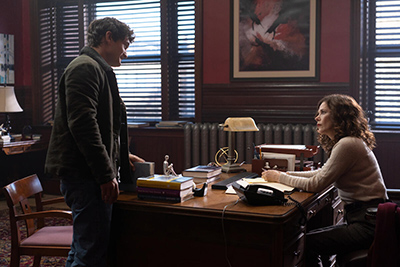 RAFI GAVRON:  I'm frightened of everybody. I'm frightened of people and how they might make me feel and what they could do to me, because I'm a sensitive little flower, and I mean that seriously. So, that's one of the reasons I like this, is because what Simon does to her, is he literally preys on her. You know, I'm scared that that's going to happen to me, that I'm going to be hurt in some way, that I'm going to be taken advantage of. That drew me to the story.

...What about your floating scene?

RAFI GAVRON:  Oh, my God. Well, I was in that suit that I talked about with you, and then I was pulled up and upside down, blood rushing to my head, on a rig. I mean, it was nuts. It was absolutely nuts; it was just crazy. I was just absolutely strung up, so it was like being Jesus but upside down, and I'm certainly not that holy. It was so uncomfortable.

It looked it, but it looked like fun too at the same time.