AMC’s Dispatches from Elsewhere follows a group of four lonely strangers who become friends during an alternate reality game that changes their lives.

Last night on the series, after Lee (Cherise Boothe) had given Janice (Sally Field) confirmation that Clara Torres (Cecilia Balagot) was real, the team continued to look for answers on what really happened to her. The audience also got to know who Lee really is and that she was the architect behind the game.

Recently Boothe talked to SciFi Vision in an exclusive interview about her character and her work on the show.

SCIFI VISION: Can you talk about how you first became involved in the series? What most interested you in the role? 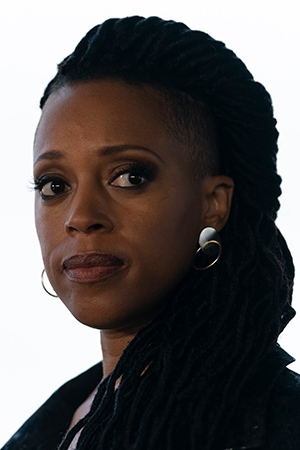 CHERISE BOOTHE: My reps reached out to me with the audition. Immediately I was intrigued with the depth of character and the seed of mystery of what was yet to be revealed that was displayed in the three scenes I was asked to prepare. I was in the middle of a jam-packed week, as I had travelled out of town to attend a family reunion. I sent in a self-tape. And though I didn’t have much time to work on it, I still wanted to try my shot at the opportunity.

It surprised me when my reps came back to me a couple days later with a note from the creative team to make an adjustment on one of the scenes. I took it as a good sign of interest, and on the morning of the day my aunt and cousins from England were leaving, I squeezed in another self-tape of the adjusted scene, sent it in, and hurried off to see my English fam for a couple hours before saying goodbye to them at the airport. It was a real delight to tell my aunt later that I landed the role.

Did they tell you everything about the role right away or give you the script? The show is a hard one to explain, so I’m just curious how that discussion went, considering your character is integral in what really happened. Then also, is there anywhere other than the script you drew inspiration from when creating the character?

Jason [Segel] helped out a lot in this area - after all he created Lee. Initially, I didn’t have much to go on. The early sightings of Lee are lightly sprinkled throughout the first part of the series, and I didn’t have access to all the scripts for the future episodes, as many were still in the process of being written. A lot of the information on who Lee is gets revealed in episode 1.08. So, for the earlier episodes, I needed some grounding to understand the whole of her, that way it would all add up by the time you really meet her for the first time in episode 1.08.

Jason and I had an initial meeting where he explained who he saw Lee to be and what inspired him in creating her. I took a lot of that in and offered ideas and thoughts about how what he shared hit me. Even after that conversation, I still had to reach out every now and then to Jason, Mark Friedman, the showrunner, Alethea Jones, the director/executive producer, and Jeff Freilich, the executive producer, for additional clarification. The story is anything but linear. The unfolding of the characters and the individual journey everyone takes was constantly surprising, even to us, the actors. Throughout the entire process, I would find myself learning something new about my character and then, shortly after, shooting a scene where she appears. It was truly a thrilling and dynamic experience!

Did you research anything to do with the game or documentary the show was based on? 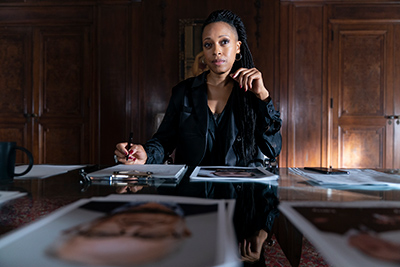 I visited the documentary a little bit and got what I felt was enough. I mostly stuck to the script. I wanted to know and understand the specific world that Jason was creating within the series. There were departures from the documentary, and with the rapid pace of our shooting schedule, I couldn’t track all those little intricate similarities and differences.

The show multiple times asks us to imagine we are the characters. Which character do you think you are most like?

Oh, wow. That’s hard. [laughs] I can be very literal, like Peter (Segel). I can feel like I don’t quite belong, like Simone (Eve Lindley). I can find it hard to let go, like Janice, and I can be very obsessive about a thing if I feel I need to figure it out and haven’t yet, like Fredwynn (André Benjamin). And, of course, these are just aspects of our main characters; I know they are much more nuanced and complex than these singular traits I’ve pulled out.

There is a deep desire for more that they all share, more than what they’ve come to know they have access to in their lives before the game. I think that desire and possibly a deep unconscious understanding that there is more, is what I share the most with our main characters. It’s why I root for them. It’s why I feel their missteps, their triumphs, their vulnerable reveals, and their breakthroughs so keenly. I’ll find myself laughing out loud, jumping or wiggling in my sofa, or tearing up, grabbing my chest and talking to the screen as I watch the series along with the wider public audience. I think to myself, “but I read all these episodes last year, how am I still feeling so much?” [laughs] It's the power of universal themes that immediately connect us to each other. That and the brilliant performances by my castmates, inventive directing, and gorgeous production values. It’s been a really good time, this whole experience.

[laughs] So, I don’t even know if I should even reveal this. [laughs] Okay. So, I read this book when I was about maybe 13 years old?  It was called Harriet the Spy, and from what I remember about the book, Harriet would go around her neighborhood, spy on folks, and write the things she observed on her note pad, eventually solving little puzzles or fixing things that were awry. At least that’s what I took from the book.

So, one summer I took it upon myself to go around my neighborhood, on my bike, observing - okay, I guess I was spying - on what others were up to. Harriet was so insightful, and just by observing people and their behavior, she could understand what was likely going on. I don’t think I had those same powers of observation, but I pretended I did. I wrote down whatever I saw and what I thought about what I saw, and with furrowed concentrated brow, made notes to investigate further. Of course, the thing Harriet did that I could never bring myself to do was sneak into anyone’s home. I think the closest I got was the sidewalk, and that was plenty close enough! I guess I took what was my inherent interest in people, human behavior, and human motivation and put that to use in my acting later in life. 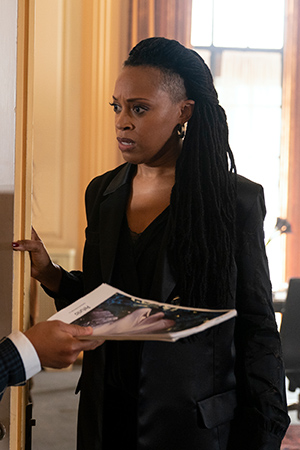 One of the top desires I’ve had for my acting, is for it to provide some benefit to whoever witnesses it, whether that be a feeling of connection, a feeling of upliftment, a feeling of being seen, a feeling of what’s possible, or assistance in relieving some difficult emotion. I think Lee is after something similar, and her way of going about that takes on the shape of this game.

How are we different? I’d put it this way, she’s an excellent, creative chess player, while I’m more comfortable with a friendly game of checkers. [laughs]

What was your favorite part about working on the series?

I loved meeting and working with such a beautiful ensemble of artists, in front and behind the camera. Being surrounded by good hearted and talented people makes such an impact on one’s experience, especially when putting together such a complex show within an abbreviated period of time. But I must say, I really loved shooting in Philly. Amidst the grit of that city there is so much elegance, heart, intricate historic and modern artistry, color, whimsy, and magic. Awesome combination; awesome city.

I was so moved by that whole series of scenes when Fredwynn goes to find and sits with Janice at the hospital in episode 1.08.  It’s like we see Fredwynn breaking open into a new part of himself before our eyes, and I feel so deeply Janice’s appreciation that someone other than her husband could come looking for her.

There are so many things about these scenes - the sweet nuances of humor woven within it, the deep emotional need, and the new intuitive understanding that responds to that need. Such good stuff. I really love the evolution of their relationship that occurs there. So very special.

This interview is going up after episode 1.08, “Lee,” airs, so the audience will have found out Clara’s not in the urn. Can you just talk a bit about that reveal and how you think the audience will react to finding out Lee didn’t tell the whole true story?

Haha! I have no idea how the audience will react. For me it speaks to the brilliance of Lee, that she really did think of everything. Just in case that bugger Fredwynn insists on digging further, she’s got something for him. She could have just as easily put something else in the urn to make it seem like Clara was in there. The other thing that it tells me about Lee, is that there is a part of her that actually wants Fredwynn to keep digging, even if she doesn’t consciously realize it. She wants him to find what she’s left. She wants him to keep digging until he’s discovered all there is to be discovered. 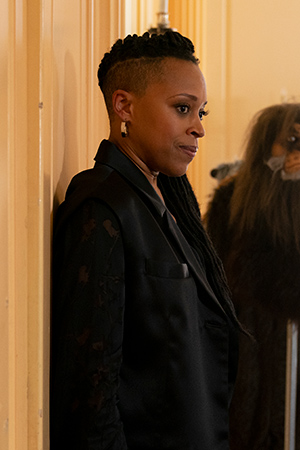 Can you tease about the future of your character and the role she really plays in what’s going on?

All I can say, is good on Fredwynn for continuing to dig for more. Otherwise we may have ended the series with episode 1.08!  And as for Lee, there’s more there than meets the eye. All right; I have to stop talking now! [laughs]

Any new projects coming up you want to promote?

I make an appearance in Steven Spielberg’s new series Amazing Stories in episode two, “The Heat,” and I’m also doing voice work on the video game Overwatch. Two very fun projects where I got and get to work with wonderful creatives.

What have you been doing to keep busy during all the social distancing et cetera?

Selective checking in on the news - just enough to keep aware but very mindful of not allowing it to overwhelm. For the most part, a lot of quiet reflection, self-care, meditation, healthy eating, neighborhood walks where I soak in as much sun as I can and photograph the vibrant spring flowers that always seem to lift my spirits, intentionally seeking what’s positive and of value in any given situation, and a personal/business home project I’m undertaking that challenges, inspires and excites me. Stuff like that.
Twitter
BotonSocial por: SocialEmpresa
Category: Interviews