Besides the others at the NYPD, he is also helped by medical examiner, Dr. Edrisa Tanaka, played by Keiko Agena, who is quite taken by him.

Agena recently talked to SciFi Vision in an exclusive interview about working on the show.

SCIFI VISION: So, how did you first start working on the show? I mean, was it an audition or...? 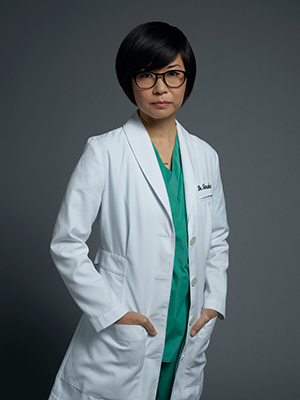 KEIKO AGENA: Yes, I went through an audition. They had two scenes, one that you see in the pilot, and another scene that was more of a background to kind of understand the character. And I went through the audition process. I started with the producers, and then I went to test after that, and thank goodness that they liked my take on it and ended up picking me for the part.

Other than the script, is there anywhere else you drew inspiration from when you created your character?

Well, you know, there was a medical examiner that was actually one of our advisors. His name is Shai Rebowski, and he was there for the first few episodes that we did. He was definitely there for the pilot. He's fascinating; I loved speaking with him. A lot of the things that he talked about really informed the way I thought about Edrisa and the way I thought about how she approaches her work. It helped to ground her for me, I think.

Did you do any other research or preparation for the role? Medical research maybe, anything like that?

[laughs] Mostly it was talking to Shia, and then also every time we have a crime scene or something that has to do with law enforcement, we have another expert that comes to set. He's Dave from the NYPD; he used to be in SWAT, and he’s lovely to talk to you. Oh, my goodness. He's got great stories, and he really helps us fact-check - as much as we can; it is still television, but it helps us to ground what it is that we are doing and to give us a different perspective.

How do you find yourself most like and most different from this character?

I think the way that I'm most different is that I am not comfortable at all with any real-life serial killers [laughs] or medical shows where they actually show real-life - that is not my comfort zone at all. So that's probably the way in which we're most different.

I think probably the way we're most alike is that I also do get obsessed with the minutiae of things and can kind of get very deeply ingrained in curiosity about something. So I think maybe in that way, we're similar.

Edrisa is quite enamored by Malcolm. Can you just kind of talk a little bit about her crush on him? She's obviously quite fascinated by him.

For me, Edrisa is immediately enamored with him, first of all, because he walks into her morgue, and it's not expected. It's not someone she's used to seeing in that environment. He's dressed in an expensive suit; he's intelligent. He’s complimentary, and he's fascinating to her. I think as time goes on, she's even more fascinated with his gift. 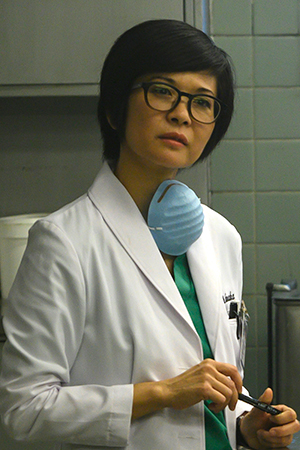 To me, Edrisa is someone who loves her job and works very hard at solving the puzzle that is given to her, well, by murderers, really. And she's adequate at it, but it's like someone who's a good painter running into a Rembrandt or somebody who's amazing at it. She's fascinated by how he thinks, and I think that just makes her fall for him even more.

So, when I saw the screeners, the special effects and things like that were not complete. I always love how sometimes we get to see like, different versions - the uncompleted version - of a show.

And the first time I watched the snake scene in the second episode, it was like a drawing of a snake over the picture. [laughs]

But it looked like, at least from what I could tell, that there were some real snakes on the ground. It looked like there was a handler there, and they probably erased him, I'm guessing.

So, can you talk about working on that scene and just kind of that idea of what is real and what goes into it?

Oh, sure. We had three aspects. We had live snakes; we had two live snakes there and two snake handlers. Hopefully people can’t immediately tell so much what’s CGI and what's real, but we had that aspect.

We had a puppeteer that was there also, but I think that was probably part of how they get to help guide the shot when they then go to CGI. And so, obviously, there was that aspect.

But to be on set with the snakes, I was just happy that they were there. I love that excitement of working with an unpredictable element.

So, you're not scared of snakes then, I take it?

No, no, I loved it. I loved them. I was more worried for them probably than about them. [laughs] I just kept trying to coax them to hit their mark, that was the only thing. Like, “Come to me; come to me.” [laughs]

[laughs] Well, you can't tell what’s not real once you see it finished. I mean, I only knew because I had seen it before. 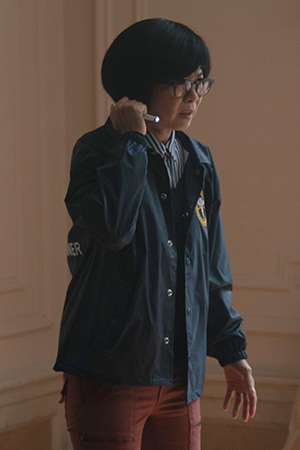 It's interesting to get to see that kind of scene both ways.

I’ve only seen three episodes, but I'm assuming that as the season goes on you get a lot more gross and bloody type of stuff that you get to work with?

Yes. So, we have an amazing team of people besides the visual effects people that we already talked about with the snakes, but we have special effects makeup people that come and do an amazing job, and it's a lot of times very realistic. And I think the interesting thing that they're really trying to push with the show is extraordinary examples of how someone could die. [laughs]

So, for someone like Edrisa and Malcolm, that's very exciting, because it's not that I think either of them are happy about death, but the mystery of how someone passes is endlessly fascinating, because it's different all of the time.

So, to have a team that can really put together an effective example of that, is a fortunate thing to have. So, we do have that, and I'm really proud of all the work that they do.

Do you have any good autopsies coming up?

Oh, yes. For the pilot, we shot in an actual morgue. That was challenging. [laughs] That was definitely challenging, but for the series, they built a set, but because of scheduling, we were not able to get to that set until episode five or so, but around there, you're going to see more examples in the morgue.

And there's the scene that we shot the first day in the actual morgue that was built for us. It’s a big scene where it really shows off the space that we have. And there were interesting things in that room that it was great that we have the space to be able to do that.

Again, not seeing more episodes, it’s hard to gauge, but do you have a lot of kind of hard medical terms that you had to learn? And did you find that difficult at all?

Yes, and I do find it challenging, and this show doesn't have an overabundance of medical terms.

I always think back to ER, when years and years ago, they did a live episode. I thought, that has got to be the pinnacle of challenging work, to have all of that prop work, all of that medical jargon, and to be doing it live and natural, the blocking, the staging, and the restrictions. That would be insane. 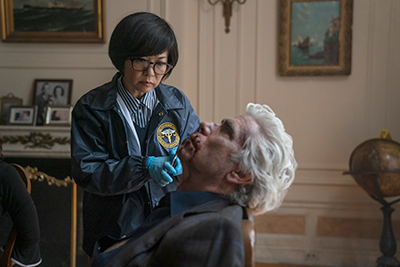 But for this show I think the medical jargon is very important, but a lot of it is very based in character point of view and relationship, which is super fun to play. So, it's balanced out evenly.

Is there anything you can you kind of tease that's coming up?

Sure, sure. I guess I could tease. [laughs] There is an implement that she uses as a medical examiner that was not created for that purpose.

And that's another example of something that Shia actually told me. When we were first getting introduced to each other, he talked about some of the interesting things about medical examiners, and I happened to mention that to the writers when I met with them for lunch when we were just meeting all of the writers. And then that is something that happens in a later episode. And there's humor about that [laughs] particular item. So, maybe that's a little something to look forward to.

Okay, I will look forward to that part.

I read that you studied at the Groundlings and it seems like you've done a good bit of improv.

Not that your character is super serious on this show, but this is obviously not that. But does that kind of experience still help when you're doing something more serious like this, and can kind of talk about that?

Oh, sure. I love improv, and I love comedy, and to me, it's more challenging to do comedy in some ways than dramatic scenes, because I think you have to be extremely clear what it is that you're thinking about when you're doing comedy. Because regardless of where the humor lies, the character has to have very, very clear thoughts for the comedy to work. 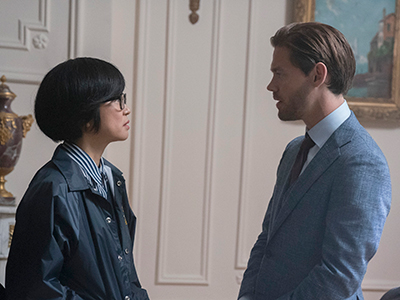 Is there anyone that you didn't get to work a lot of scenes with maybe that you'd like to spend some more time with if there’s a next season, hopefully?

Oh, yeah, I definitely would love to have a lot more scenes with - or any scenes, really - the family. I just love Bellamy [Young] and Halston [Sage]. And, you know, it would be a dream to get to do something with Michael Sheen and that whole element to it, if ever those worlds crossover. That would be just fascinating and such a fun world to play in.
Twitter
BotonSocial por: SocialEmpresa
Category: Interviews