Tonight, AMC’s Fear the Walking Dead returned for the back half of the fifth season. Filmed as if Al (Maggie Grace) recorded everyone for a documentary, the episode tells the story of the group coming into contact with a woman, Tess (Peggy Schott), and her son (Cole Whitaker). Holed up in a house surrounded by landmines, Tess awaits the return of her husband from the pharmacy with the inhaler her son needs. Finding her husband’s body, they work to talk her down and out to safety, all while avoiding the dangers around.

Recently, co-showrunner Andrew Chambliss talked to SciFi Vision in an exclusive interview about the midseason premiere, including how Alicia (Alycia Debnam-Carey) has been affected by recent events, how Morgan (Lennie James) is trying to heal, and more.

SCIFI VISION: Can you talk about the decision to film the episode in a documentary style? 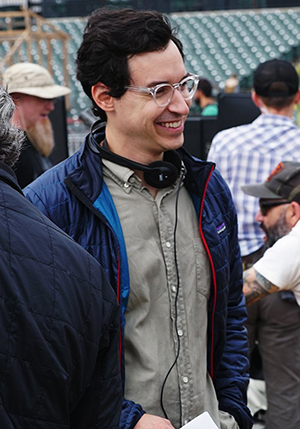 ANDREW CHAMBLISS: There were a few reasons we approached the story from a documentary style. It’s something that we had been talking about doing for a while. It, to a certain extent, fit into the narrative, given that Al is a journalist and is always carrying a camera around to record other people’s stories. We felt like it was the right time, because of where she was in her journey, where her experience with Isabelle put her in a place where she realized she really needed to open up and strengthen the connections to all the people around her.

So, for the first time, she is really turning the camera on herself and around the people she’s closest to. So, I think that was the thing that it felt like it was the time to do it.

Then thematically, it also really felt like it afforded us a way to platform the thematics for the back half of the season. So much of the first half of the season was about the characters looking outward, trying to help other people on a path to redemption. But these characters, now that they’re finding success in that mission, are realizing that they actually still have a lot of work to do on themselves, and they’re starting to look inward.

And this format, you know, having a kind of voyeuristic eye into their lives, seeing these talking head interviews that give us a kind of larger glimpse into what they’re thinking, provided a very effective way for us to do that and set up their journeys for the rest of the season.

Can you talk about how Alicia has changed after recent events with the radioactive walkers and how it’s affecting her? She’s not fighting alongside the others now, so obviously it’s taken a toll on her.

Alicia, I think, for so long since she lost her mother, was really living in a place where violence was what she thought was the answer. And obviously she was using that in one way when she was on her revenge mission. She had thought she found a way to kind of channel that and use it for good, and that was to protect everyone that she was with. But even then, it was consuming her in a way that she realized she wouldn’t be able to come back from.

And I think the exposure to radioactive walker blood was the final straw in kind of the uncertainty of what it means for her future. I think she is now in a place where she’s just kind of taking a step back and looking for a new way to live, looking for a new reason to continue. 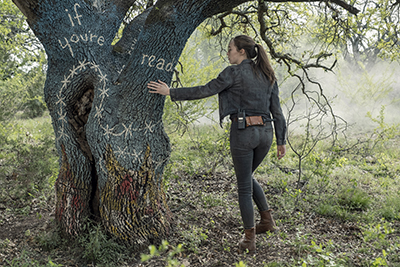 And, you know, seeing that there is someone out there who is painting these trees and at least trying to spread a little bit of beauty in a dark world is giving her hope that maybe she can find an answer to her search at some point.

That answered my next question. I was going to ask about the tree, but back to talking about the radioactive blood, would it be correct to say the radiation is not an immediate threat that viewers should be worried about, because that could be something that won’t affect her until years down the line? Are we supposed to be concerned?

I will say, we engage in it a little bit with Grace (Karen David) and her concern in this episode, but radiation can take a long time to show its effects, and it can affect people in very different ways. So, I think it’s something that, as you said, is not an immediate threat necessarily, but it is something that I think is in the back of everyone’s mind who was exposed, from Grace to Alicia. And we also shouldn’t forget that Morgan and Strand (Colman Domingo) and Charlie (Alexa Nisenson) also ended up being in the contaminated area for the course of the first half of the season.

That’s true. I think people may have forgotten that they were exposed as well.

In this episode, everything that happens with Tess obviously affects Morgan, and because of that he’s finally starting to open up about his past. I mean, we’ve seen him go on quite a long journey and how everything brought him here. He’s gone from killing to not killing and back and that kind of thing. Is he ever going to be able to get the closure he needs and be okay with what’s happened? Or do you think he’s gone as far emotionally as he’s going to go in that sense?

I don’t want to give a definitive answer on that, but you’re right. He has had a very long journey in terms of coming back from being a broken man who has descended into violence, because he watched his wife die and then saw his son killed by her in a very horrific way. I think in terms of the violence, he feels like he is in a place where he finally has a handle on that and has learned to live with it and to not let that control him. 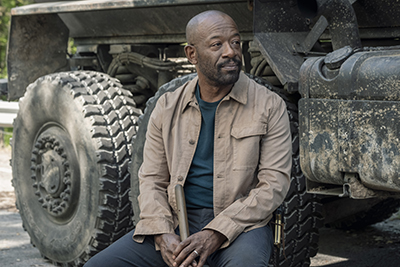 And I think because he has a handle on that, he’s now in a place where he is really realizing - and this is what his experience with Tess helped illuminate - that he’s not actually grieved for his wife and his son’s loss in any sort of a healthy way. It’s what he says in his interview with Al. He knows he needs to say goodbye; he just doesn’t know how to do it. I think it’s a loss that he’s lived with for so long. His journey to say goodbye and get to a place where he can truly put his past behind him and start looking towards the future is one that is not going to be easy, but he knows he’s going to need to take. That’s going to be a lot of what Morgan’s emotional journey is going to be over the course of the back half of the season.

Talking about what he’s going through also makes me think of Dwight (Austin Amelio) and his wife (Christine Evangelista), Sherry. Is his search going to be prevalent throughout the back half of the season? Is there anything you can tease about that and where his journey is headed?

I will say that Dwight is still committed to finding Sherry, and I think what he is realizing right now, is that perhaps he needs to focus a little bit on himself, and he needs to get himself in the right frame of mind so that when he finds her, they can heal everything that they have suffered together. So, I will say it’s going to be kind of a dual journey for Dwight. It’s going to be as much about himself as it is about Sherry.

We’ve had Dwight recently move to the show, and even Morgan quite a while ago, and before, earlier in the season we had a little bit about the helicopter. Are we going to get any more either direct or even just crossover moments like that from the main series again?

All I will say, is Al is definitely still thinking about Isabelle (Sydney Lemmon) and what happened between the two of them, both on a personal level and in terms of the way that Al’s story with Isabelle opened up the idea that there could be a larger world out there. People are going to have to watch if they want to find out more about that.

So, we might not have seen the last of her; I would guess.

I would say, people should watch. 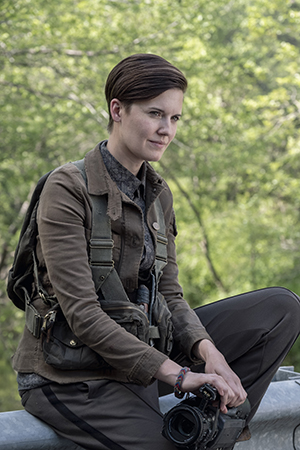 Can you talk a little bit about the new character, Wes (Colby Hollman), who meets up with Logan and the others at the end of the episode and what role he’s going to play?

He’s someone we’ll learn more about throughout the course of the back half of the season. Our introduction to him now was really hoping to use him as a surrogate for the audience. And I think the attitude he had when he finished watching that tape was a bit of skepticism and perhaps thinking that the message that was on that video tape might be not possible in this world. That is something that we’re going to explore with all of our characters in the back half of the season.
Twitter
BotonSocial por: SocialEmpresa
Category: Interviews