Exclusive Interview: Samuel Anderson Talks Another Life and Doctor Who

Thursday, Netflix premieres its new original series Another Life. The show follows astronaut Niko Breckinridge (Katee Sackhoff) on a mission to make first contact with alien life. She is joined by her crew and the interface of the ship, William, played by Samuel Anderson.


Anderson recently talked to SciFi Vision in an exclusive interview about his time working on the series, as well as a bit about working on the BBC series Doctor Who.
***Contains minor spoilers***


SCIFI VISION: Was there anywhere other than the script that you took inspiration from when creating the character of William? Perhaps another AI or robot? 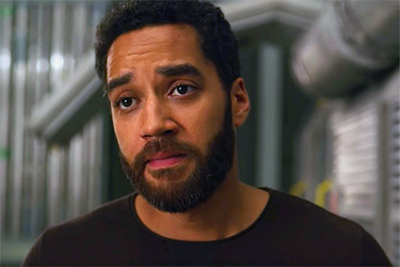 So, Pinocchio was kind of my go to guy in a strange way. Especially after like the breakdown, they wanted to be sure he wasn’t too robotic; they didn’t want an AI like we have seen before where they have a little trait trying to give away that they’re a robot or they’re not human. They weren’t looking for that, so Pinocchio was one of my guys.

And then, right now, AI is such a huge [deal] at the moment, because we’re so close. You’ve got people out there that are debating whether or not we should be pushing the button when the time comes. There are people like Elon Musk, who says, “Whoa, let’s not do that,” but there are other people saying it’s inevitable.

Other than that, was there any other research or preparation you did, like learning specifically about some of the tech stuff, anything like that?

Quite a bit. Fortunately, Joe Rogan has had quite a few guys on his podcast recently who talked about AI. Google’s also a fantastic tool, which is an AI itself, [laughs] and I did revisit a bit of old Doctor Spock; I do like him.

How did you first get involved with the project, and what was it that attracted you to the role?

Actually, I got sent a self tape to do. At the time, I hadn’t been working for a while. I was working for a friend on a building site at the time, and I was starting to think that my agent was just sending me self tapes, because he couldn’t get me any auditions and was just pretending [laughs] and that none of it was real. But once the project came through, there wasn’t too much given away, as you can imagine. I think I just got a script, which is quite a lot actually nowadays.

And also, my dad’s a massive sci-fi fan. He’s been a huge sci-fi fan forever, so I always think of him when the sci-fi comes around.

Did it feel different to you production-wise and such making a show for a streaming service like Netflix rather than network television?

Without knocking anyone I’ve worked for, it was incredible. It was a brand-new experience for me; I’ve never felt so much like part of a team. And like I said, this isn’t a knock, but a lot of times you get up to set and people are so busy making sure that their job is done to 100% that you kind of feel like you’re left to your own devices a little, which is fine, but there I’ve never felt like such a part of a team. It was incredible. Everyone from the top wanted my opinion and wanted to know if I wanted to add anything. It was incredible. It was unlike anything I’ve ever experienced.

Is there anything that you added or that was changed you can think of?

The bleeding dressing room; I would have just lived in that! [laughs] No, I couldn’t have asked for anything more. It was brilliant. They’ve got a great team, from the people who pick you up in the morning - our drivers, caterers, hair and makeup - they just go above and beyond the call of duty. It was one of the easiest jobs I’ve ever had because of that.

I know it sounds strange; it was the busiest and most nervous I’ve ever been perhaps, and you know, there was so much riding on it. The stakes were a lot higher than they’d ever been, but it was just very comfortable to do. Like I said, they went above and beyond, absolutely. 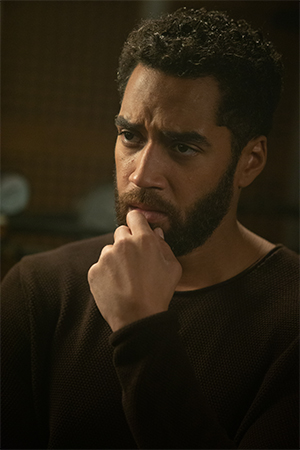 Can you talk about working with Katee?

Katee, what a dream; just the perfect number one to have on set. It was just brilliant. She’s not a diva at all; so laid back, so funny, she makes the day just go by so quick. She knows how to switch it on and off. When it’s time to work, boom, we’re gone, and in between once they say cut, she can just keep the fun going. She can keep the work going, but when we got a little down time, spirits up. She’s a great person to learn from and just an absolute professional. She was off book [a lot]. She’d get off book for everything in one, which shows someone with true dedication for their craft. My approach is slightly different, but I think that’s coming from a theater background, which is a bit of a different thing. But I couldn’t have been happier. She made me feel so welcome. It was great.

Can you talk about William’s relationship with Niko? It was interesting and unique.

I don’t think he was programmed to answer to Niko, but I think the level of technology is so high, that it comes with a lot of emotion, and it’s [laughs] a little like he’s a pet. [laughs] She’s the first one that he kind of spends time with, and he just has a special loyalty to her, and I think she’s the one he learns the most from. And by the end of episode one, William’s learned a hell of a lot about life and death and morals, and it’s a huge learning curve for him. It’s a huge coming of age, if you like, within moments; this all happens fast. And I think this is something that goes back to ourselves as humans. You know, if you experience major events with someone, you’re a little more tied into them than you would be other people, but he loves Niko.

I think it’s all about learning to read signs, like all of us have to do as well. He’s basically a child who is also the smartest thing that mankind has ever known. So, he’s growing up very very quickly. Imagine going through puberty in a day; it would be horrific. And I think the feelings he’s becoming aware of are growing inside him, and he’s learning and has to realize that it’s not just black and white. There’s a lot more to life than just what you think you want or what you’re attracted to at any given time. And he deals with that like most people do; he takes it very personally. He takes it to heart and pushes back. He becomes a bit of a problem; he doesn’t know how to deal with it. But again, because he learns so rapidly, he learns very quickly the mistakes that he’s made. He learns to apologize and learns to understand that people aren’t always the way you expect them to be.

Another thing that he learns is people behave differently when they’re inebriated! [laughs]

It’s hard to tell for sure, but how much of the production was practical with the set? Was there a lot of green screen?

For me, I have to say, I drew the long straw with this one. I didn’t have to do any green screen and very, very little exteriors. I think I did two exteriors.

I’m not someone who likes the cold. [laughs] I think if the cast and crew had to see me on many exterior cold, freezing wet days, they would have been so surprised. [laughs] They would have been like, “Is this guy all right? He just kind of shut down, got silent, and is in the corner.” Like, “Where’s Samuel gone?” So no, fortunately for me, I was in the studio pretty much all the time.

But yeah, I’ve done green screen [before]. I did bits of it with Doctor Who.

It’s strange at first getting into it, but we do stranger things on some of these self tapes that we have to do. Sometimes you have to do a self tape, and it’s just yourself in the room replying to yourself. [laughs]

There was a funny scene once, when there was a lot of confusion on set, and the crew didn’t realize that Katee had taken a toilet break. I was still on set, and the camera would have been just over Katee, so it just was on me. And I thought, ‘Oh my God, no one’s got that it’s just me in the room.’ I thought, ‘You know what? I’m just going to go for it anyway.’

They called action, and I did one of those scenes all by myself. [laughs] So that was kind of like a green screen. 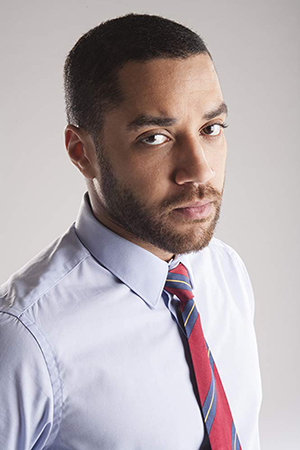 If I may, before you go, I did want to ask you one question about Doctor Who. I’m sure you’ve probably been asked everything already, but, thinking back, what’s the one big memory that sticks out from working on the show?

I think it was after being there for two weeks. I stepped on the makeup truck, and Peter Capaldi says to me [imitating Capaldi], “How you feeling, Sam?” And I said, “Oh, you know what, I’m starting to, you know, be myself. I’m settling in.” And he went, “Bloody hell, imagine how I feel.” [laughs] I felt like such a geek, because I had forgotten in all my panic of being in the new kid, he was the new Doc, you know?

So that was the moment when I just kind of started to really relax into the role. And then funny enough, that was the same week I had my first day on the TARDIS. So yeah, that was a nice week.

And also the turn out for the premiere, I had no idea how huge the show was. I was really ignorant. I knew it was big, well, I thought I knew it was big, but I was [laughs] a little mistaken.
Twitter
BotonSocial por: SocialEmpresa
Category: Interviews