Tonight, USA Network premieres it’s ninth and final season of its hit series, Suits. Denise Crosby joins the cast this season as Faye Richardson, a by the book representative of the New York Bar Association, who comes to reign in the team at Zane Specter Litt Wheeler Williams, as their legal problems are far from over.

The actress recently talked to SciFi Vision in an exclusive interview about her role on the show and what fans can expect this season. 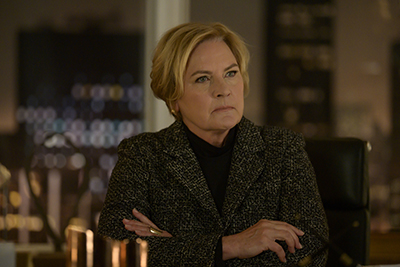 DENISE CROSBY: She’s doing the right thing though. You have to give her that much.

That’s true. And that was kind of what I wanted to ask you about. In the second episode we get to see her interact more with the team and learn more about her methods. It very much seems like she is going to be a problem for them and isn’t at all forgiving. Do the others at the firm have any way to get through to her? Is she bendable or is she really not willing to give at all?

I mean, you know, at this point you’ve only seen the beginning. She has to pretty much come in and lay down the law. What begins to be revealed through the course of the season, is people begin to reveal themselves, their frailties, and their reasonings behind their behaviors.

You will begin to see a more complete picture of Faye, but at this point, she takes her job very seriously, and she’s there to do a very specific thing. She was sent by the New York Bar Association, and she has a very high moral attitude about this stuff, and there’s a reason for it. She’s seen the consequences of what happens when you break the law, and you’ll learn more about that as the season goes on.

And these guys, they don’t like it, but she is in fact saving their lives. They have one last shot before they’re going to all be disbarred. They’ve done so many wrong things. You know, partners have been disbarred, and one has gone to jail. The time is up for them. I think the fact that the Bar Association is even allowing this firm to continue is because they’ve won some pretty major cases, and they are all fine topnotch lawyers; they’ve just gone to the dark side.

So, they’re going to try to reel them in and basically just say, ‘Look, the only way you’re going to survive and exist going forward, is if you do things my way.’ And I basically come in to babysit them and get them on track. Now of course they don’t like that.

And the thing with her which I really love, is that, you know, she’s on the side of the law. So, she doesn’t have any personal vendetta that she’s there [for]. Her thing is like, you know, ‘What kind of lawyers do you want to be? You guys took an oath. You’re completely basically dissing the oath you took, and you’re going to bring everybody down with you.’

And I think you’ll find certain partners get it a little bit more than others. I think Katrina (Amanda Schull) is one, and I think Donna (Sarah Rafferty), you know, her wisdom prevails. She may not like Faye, and she certainly doesn’t like what Faye does to Harvey (Gabriel Macht), but she gets that they’re going to lose [everything].

Speaking of Harvey and Donna, I think it’s safe to assume that at some point Faye will find out they are in a relationship. I’m curious, is she against office romances? Does it become a thing between them?

It can certainly be a problem. You know, she’s seen it in the past. And I don’t think that she wants to get into people’s personal lives, but if there becomes a conflict in the law, that’s when she has to step in.

So, right at this point, I think she kind of feels like, ‘Oh man this is not a good thing,’ but what are you going to do, you know? People love who they love. But, we’ll see [laughs] where it goes. 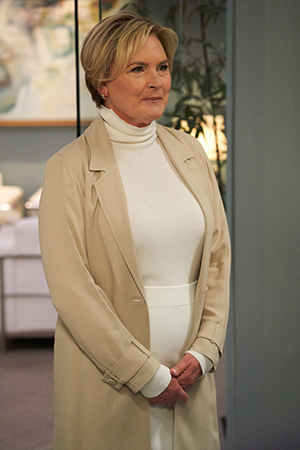 I also wanted to ask about Louis (Rick Hoffman). They don’t get along very well [laughs].

I think she just scratches [the surface]. I mean, she kind of really likes Louis. She goes for Louis first. Really, it’s Louis that she appeals to about this whole thing. She’s kind of looking to him to be somewhat of an ally here. She doesn’t want to do this on her own. She’d rather Louis get on the program with her and reel these guys in, but, you know, we’ll see how far that goes.

Can you talk about how you first became involved with the show?

I came in, and I had to read for it. It was put on tape and tested, and the creator Aaron [Korsh] took a look, and said, “That’s my favorite [version].” Then I was cast.

Had you seen the show before?

I had, but then I had to really jump in and binge a little bit. And to be honest, I hadn’t been up to speed with it, so I had to take a look at just the kind of overall style and rhythm and see where they were at.
Twitter
BotonSocial por: SocialEmpresa
Category: Interviews