SciFi Vision | Interviews | Exclusive: Aaron Ashmore on Playing a Different Side of Johnny in Killjoys

Exclusive: Aaron Ashmore on Playing a Different Side of Johnny in Killjoys

Tonight Syfy aired the second episode of season four of its popular series, Killjoys, where we get to see what’s happening with Johnny, played by Aaron Ashmore, and his brother D’Avin (Luke Macfarlane), who were stuck with Delle Seyah Kendry (Mayko Nguyen) on Aneela (Hannah John-Kamen)’s ship’s elevator when we last saw them at the end of last season.

Recently SciFi Vision talked to Ashmore in an exclusive interview about the show, where he talked specifically about tonight’s episode, among other things.

SCIFI VISION: Can you talk about your scenes with the woman who plays Delle Seyah Kendry, Mayko, and Luke? The three of you play really well off of each other, and those were some of the funniest scenes so far this season, in my opinion. 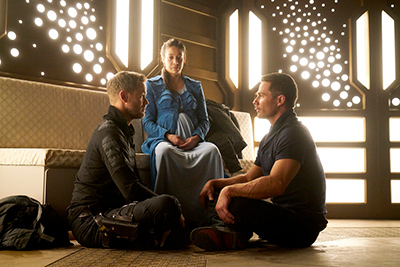 [laughs] Well, it’s sort of the odd couple, these three characters that are stuck together. And obviously D’avin has somehow impregnated this woman, [laughs] not to his knowledge, not by his choice. So, they are trying to figure that out and decide how they’re going to play that and work that out.

Then John’s sort of the third wheel that’s stuck with them, just being like, “Oh my God, what the Hell’s going on?”

So, yeah, we really enjoyed that.

And I never got a chance to play a lot with Mayko, just a few scenes here or there. So, to get a chance to have more scenes and more interaction with her - I think she’s such a fantastic actor, and the character’s so well written, that it was really, really fun. And there’s just a lot of awkward beats, which I think turned out really funny.

In the episode, you start turning kind of dark. Can you talk about playing that other side of Johnny?

Well, being Hullenized does not make you anymore more compassionate or caring or anything like that; it basically strips you away of all of your empathy and your connection to your emotions. So, that’s what starts to happen, and it’s a bit of a slow process, because the amount of green that they had was minimal, so it was basically just enough to keep John alive without fully turning him Hullen.

And he starts to lose his mind a little bit, and the connections to the people that he has start to disappear. He starts to act in a crazy way. He doesn’t really care about people in the same way, and we know that John is the most caring of the team, I think. You know, he has the biggest heart.

So, it is interesting to sort of see that slip away.

And in the episodes that follows that, we see a little bit more of that, which is kind of scary and kind of interesting, to see John going to the dark side. 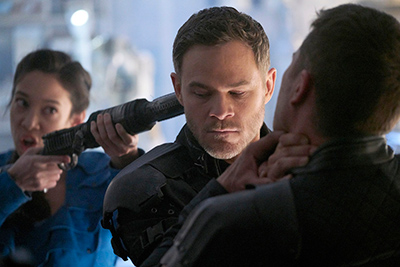 Expanding on that, I’m assuming he’s not going to be a crazy Hullen version of John forever, but is it going to have any lasting effects at all?

Yes and no. John does not stay bad forever, let’s put that out there, but I think most people can probably sense that that’s going to be the case.

There are some lasting effects, but also the writers didn’t want to wallow too much in the repercussions of that, because there’re just so many other things going on in the show that we’re trying to do.

So, I think that there are some. You know, we see a little bit of that, but not a ton. He’s not going to be like super regretful and all that stuff, because he didn’t do anything wrong. They were just trying to keep alive, and he wasn’t in control of himself, because that’s just what happened. And of course, there’s some guilt there, but nothing that stays for too long. I think everybody understands that, you know, John was not John; he was under the influence of the green.

Can you talk about some of the action scenes from this season and the logistics of them? Do you enjoy stunts and that kind of thing?

Then in the second or third episode I get to do some really cool stuff. As I’m Hullenized, I’m more powerful and faster, so there’s some really good sequences where I get to kick some butt, which I was excited to do, because I just don’t get to do it a lot.

Is there anything can tease about John and D’avin’s reunion with Dutch (Hannah John-Kamen)? I assume eventually the team will be back together. 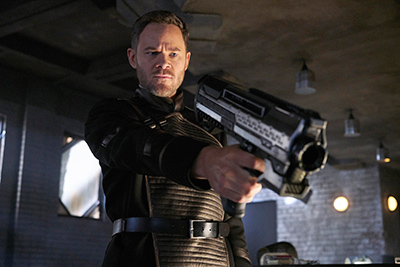 I will say this; they’re not going to keep us apart for that long, I think that the show works best when our team is together, and that’s what we need to do, to get together to then start fighting the Lady. So, they don’t keep us apart for too long.

And Dutch makes a dramatic entrance back into our world. I wouldn’t say that it’s smooth; I’d say that it’s pretty bumpy when we all get back together.

**Be sure to check out part one of this interview to hear more from Aaron Ashmore!**