During the Wizard World Convention in Pittsburgh earlier in the month, actor Eddie McClintock talked to Jamie Ruby of SciFi Vision in an exclusive interview.

As the site had previously talked to actor James Marsters, who played Professor Sutton on Warehouse 13, and asked him about working on the series and with McClintock, SciFi Vision also asked McClintock about his experience working with Marsters. "James is awesome. I was a fan before, so as soon as I got past the goofy fangirl squee of having him on the set, and we got down to business, he's just fun to be around, and if you've seen the character he played, the character's hilarious and over the top, and we just had a blast." 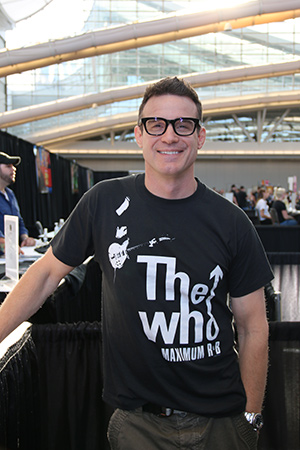 McClintock recently appeared on the popular series Agents of S.H.I.E.L.D., which he enjoyed his time on, and hopes to get to return to. "I played Vin-Tak who's a Kree [and blue]. Drew Greenberg, who was a writer on Warehouse 13 went to from Warehouse 13 to Arrow and then on to S.H.I.E.L.D., and he called me one day, and he was like, "Do you want to come do S.H.I.E.L.D.?" And, I mean, you know, it was a dream of mine to be in the Marvel universe. And they digitized me, so my soul has officially been stolen from my body. And I got to work with Jaimie Alexander, and Clark [Gregg], and Ming-Na [Wen], and everybody, and it was great. It was really cool. I'm hoping that they bring me back." 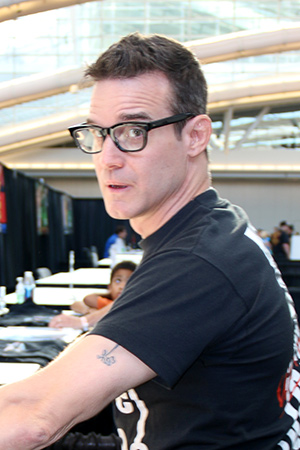 Warehouse 13 may be over, but the fandom is still going strong at conventions. Recently McClintock and other actors of the series took part in a successful panel at DragonCon, even though the series has been off the air for over a year.

The actor sells t-shirts he designs himself each year at the conventions, and they have been very popular among the fans. "I have new Warehouse 13 t-shirts. Every year at DragonCon I bring a new t-shirt; this year I brought 300 of the new t-shirts and sold all 300. It's kind of a cool design...My idea was what happens to Artie and Pete after the Warehouse closes? Pete loves eating cookies and Artie loves baking them, so they opened Artie & Pete's Cookie Warehouse, and coincidentally it was established in 2013, so it still says "Warehouse 13" on there, "Univille, South Dakota," and it has the Farnsworth...and then on the back it says, "Come for the cookies; stay for the endless wonder." People seem to love them." 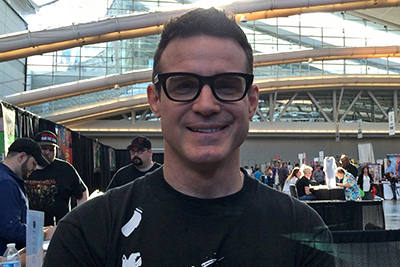 You can purchase t-shirts from McClintock online at eddiemcclintockwh13tshirts.com

Be sure to watch the full video interview below, and for more, check out what James Marsters had to say about Eddie McClintock. Also take a moment stop by Diary of a Fangirl to see their interview from the event.