Thursday night, as part of the Wizard World Convention in Pittsburgh over the weekend, James Marsters sat down with SciFi Vision for an exclusive interview.

Although undoubtedly best known for his role as Spike in the television series Buffy the Vampire Slayer and its subsequent spinoff Angel, Marsters has also appeared in many other series and films since then. One of the more recent projects the actor appeared in was Warehouse 13, as Professor Sutton. He loved his time on set, and had great things to say about working with star Eddie McClintock and showrunner Jack Kenny. "Eddie is awesome. Eddie is much like his character: funny, self-deprecating, and hilarious, and he's also very intelligent and without ego, which is so important if you're in a creative field, to avoid ego. I'm always impressed with people who can go through fame and not succumb to ego, and I've noticed that artists who do succumb to ego don't really come up with a lot of interesting things. 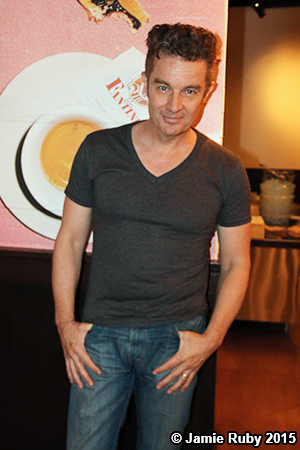 "I also loved working on Warehouse 13, because Jack Kenny is a marvelous producer. A set runs best when the producer is in charge, and if the actors get control, it is like Alice Through the Looking Glass, in a really bad way, because as actors, we are paid to gaze at our own navels; we're paid to think of ourselves and just what impacts our little part of this machine, and I always appreciate a producer that will terrify everyone.

"We had Gareth Davies, who was the producer on Buffy, and he was like Darth Vader. People were horrified if they came to set, and I loved him, because I'd seen what happens when actors can get control.

"So Jack Kenny is like that, but he does it with humor. He'll crack the whip with a really great joke, and he'll assert his power...but also they're laughing at the same time. He's a genius at it. And frankly, keeping actors in control when you can't fire them for seven years at a time, is real thing to be able to do."

The actor has appeared in a variety of projects, including playing both guest spots and leading roles. Both have their ups and downs. "I guess that I would like to be on a series again, but you just have to work so hard when you're a regular; it can burn you to cinder. I mean, you work twelve to twenty hours for seven years, five days a week, and you get burned up. And I'm in an enviable position now of going on shows and getting paid an astronomical amount of money, and I get to come in all fresh...and they have to hump the thing over the hill all the time, and I get to kind of come and go.

"Artistically it would be nice to have the same character for seven years and explore that, but I don't know if I should wish for that too much, because I may regret getting it.

"I'm waiting to see if an HBO show gets picked up that I would be a regular on, called The Devil You Know. [With] Jenji Kohan who does Orange is the New Black, and Gus Van Sant is directing, who is one of my favorite directors. So I'm wishing very much it gets picked up, but there's another little voice in me saying if we get picked up we're waiting for winter to fall again in Massachusetts so we can go get hypothermia again. I mean, the whole thing takes place outdoors in the winter time, and it's just going to be brutal, so I don't know if I'm wishing for that or not (laughs)." 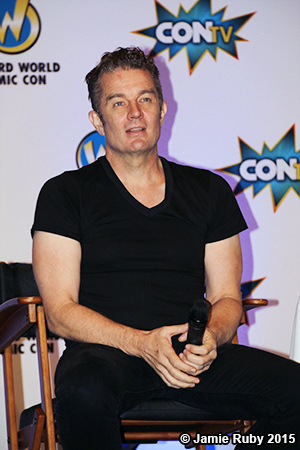 One series, however, that Marsters would enjoy working on again, is Hawaii Five-0. He loved working with star Alex O'Loughlin. "That I would do; that is awesome. They put you up at the Hilton Resort, and it's not even work at all. And Alex is so good to work with.

"Alex and I are two actors that they'll allow to fight each other. Alex is a certified stunt man in Australia where he comes from, and I'm a stunt choreographer on the stage, and so when we filmed the pilot, they didn't really know this about us, and they're like don't worry guys we're going to just do like two or three moves, then we'll cut. Don't [worry]; you wont be hurt; because they were letting us actually fight each other which is not normal. They usually have a stunt man for actors for safety, and they just wanted to get a few shots of Alex and I actually fighting each other. And Alex just comes up to me and goes, "Do you do stunts?" I'm like, "Yeah, I do a lot of stunts," and he goes, "Yeah me too; let's just do the whole thing. Is that okay?" I'm like, "Yeah, I got the moves, okay." And we just took off, and just kept [fighting] up the stairway, and the camera crew got really happy. They let us fight. But Alex is a younger man than I am, and he just kicks my ass."

Another popular show that the actor had a memorable role in was in Torchwood. "When I got to England to film, the creator of Torchwood, Russell T. Davies took me out to dinner, and he said, "This is my Buffy," and I didn't understand what he meant, until we got into it a bit, and I realizes that this was his subversion. Joss [Whedon] was subverting the lie that women can't defend themselves, and he was unabashedly going for that, and some people got offended by that, which I think is delicious. Russell was going after the lie that gay people can't be heroes, and he was going for the jugular. And he was a Buffy fan. He liked the subversion, and he was excited by being able to do subversive art in a fantasy setting, and he laid down, you know, his statement, and I think I'm very proud of that show, because that's a lie that needs to be subverted."

Marsters loves fan conventions and he keeps going to them. "I love fan conventions. I've loved them since 1974. I was in Oakland, California with pointed ears and a blue tunic, and my eyebrows were raised, so I could look like Spock, and I had a big blond afro, and I was beautiful, for the first time in my life. And all the girls wanted to talk to me, because I had the best phaser at the convention, which I made by hand. 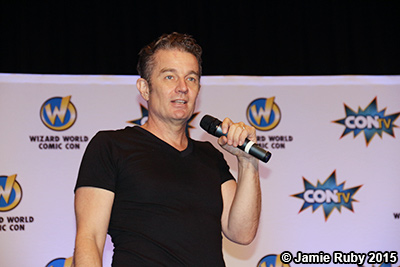 "And I discovered a place where you can be anything that you want, where you can make friends easily, where people are intelligent, and kind, and don't take themselves too seriously, and are tolerant, and it's a little bit of a heaven every time I go.

"At these conventions, people are walking around with beer and swords and no one gets hurt. And I watch Youtube accounts of Black Friday, and you contrast that with behavior with what you see at a convention. Everyone on earth should go to at least one convention, if only to learn how to behave in a crowd. There's so much good that happens at conventions. It's one of the last places where large crowds gather to talk to each other.

"When I was producing theater, it was all about how do we create community in a world of television, and now smart phones and stuff. How do you get people to actually look in to each other's eyes and connect to each other? As theater producers we go to conventions and talk to each other about this. There's a lot of thought put into this, and ironically, when I stopped producing theater and went down and joined the devil in Hollywood, I find myself in a position where I can help do my part to create community, I think for more people than I ever dreamt that I could."

The actor also has a band, and they have a new album coming out in a few days. "My band Ghost of the Robot is coming out with a third album it's going to drop on iTunes on September 19th. It's our best album. The man who masters Lana Del Rey stuff did our album, and it glistens. It's a return to the furious energy of our first album, but we've learned a lot more about production, and so it’s slick, but furious." 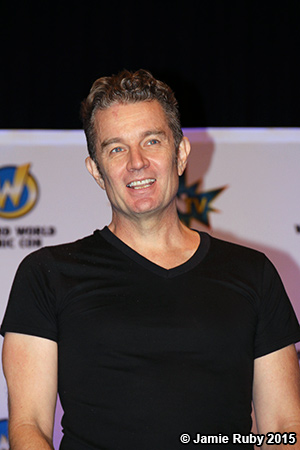 The actor also has a few films coming up that fans can look forward to, as well as a possible series. "I just did a movie called Dragon Warriors, which is a big special effects movie. It was shot on green screen and will premiere in Salt Lake City next weekend.

"I just did the lead in a disgusting horror film that I was offended by the script, until I got to the end, and then it all wrapped up into something beautiful and interesting, and it’s all being done with puppets. So it's going to be like Team America, and there're going to be like these puppets feeding puppets into meat grinders and getting brain splattered on their faces. And it's going to be really weird and cool.

"I mentioned the pilot for HBO we're waiting to see if that gets picked up."

Lastly, Marsters also has another project coming out. "I just had a comic book come out from Dark Horse called Into the Light, which I wrote, every word, it's about Spike, and it's Spike going back to the underdog character that I think he's strongest at. And it's really good; you should go get it."

Be sure to check out James Marsters in the video interview below, and for even more, stay tuned for more photos from his panel. Also take a moment stop by Diary of a Fangirl to see their portion of the interview from Thursday night.