Last week Syfy premiered its new series, Olympus. Tonight's new episode introduces the character of Kimon. In preparation for his debut on the show, actor Levi Meaden talked to Jamie Ruby in an exclusive interview about Kimon.

Kimon was not the character that Meaden originally auditioned for. "I had originally actually gone in for Lykos, but they went another way; they wanted somebody darker. They went with Wayne [Burns], who just does a great job. And they had me come in afterwards and read for Kimon. And I read for it and I thought it went well, but I didn't hear anything for a while.

"So I actually ended up going back home for a family reunion. I take very little vacation, but I was going to take four days, and about 36 hours into my trip I get a call saying I had to run back, because they wanted to test me for Kimon.

"So I ran back and was in the room with Nick [Willing], the creator of the show, and did it once, and it went great. A couple of days later we heard that he wanted me to do that [role]."

The actor talked a bit about his character. "I play Kimon, who is the scribe to the prince. He's brought in to be his confidant as the prince starts to ascend to the throne after there's a power vacuum. And we grow close and have a relationship together, and I become his lover and a lot of other things, but allegiances in this show are always in question."

Kimon isn't really one to get in on the action. "I use my intellect more than my brawn through the show. I'm less a fighter than a planner."

Meaden took inspiration for Kimon from history and mythology. "I looked at a lot of the history and the placement of people in that position, and I kind of dug a lot into certain myths and what he would kind of think of the gods, you know, the mentality behind them, such as Dionysus and so forth. I think there was a lot of inspiration that came from these different gods that I think he felt an affinity to and felt thankful towards.

"And I took a lot of cues from other historical movies. There's Russell Crowe's right hand man in Gladiator; I took some cues from that and a few others. What comes to mind is Tony Curtis in Spartacus as well. There's just kind of an aspect of the way that he played that character I think I took some inspiration from."

The actor has been a fan of mythology and really enjoyed his time on the set. "I was a big fan growing up of Xena and Hercules, and that spun itself into being a giant fan of Greek myths in general. I used to read them nonstop; I just could never get enough. So I think really being immersed in that world was super cool; being able to see it and feel like you were walking into palaces and create the mentality that would go along with that was super awesome. And I think everybody had such a blast doing that and had so much fun on set. The whole cast and crew were just fun to be around. We hung out after the show; everybody got close, and I think that comes across on the screen."

Meaden really enjoyed working with the cast. "John Emmet Tracy, he plays kind of the character who had raised me and trained me, and he was almost like a father figure to me. And he had such a presence when we had scenes together, that I think we really created that relationship without it ever being explicitly stated - it's always implied - and I think that relationship really came off.

"Wayne, like I said, was just so lovely and so easy to work with, especially in the scenes where we had to be a little more vulnerable with each other. We really were able to feed off each other.

"And Cas [Anvar] who plays Prince Xeres, had this great, almost reptilian quality to him that when I was facing off against was always finding really my own kind of mentality in the show."

Another of the cast members that the actor enjoyed working on scenes with was Sonita Henry, who plays Medea, Lykos' mother. "Some of the scenes of me and Medea facing off were great, because she never trusts Kimon; she always thinks lesser of him. So I think a lot of the scenes where we face off with each other I really enjoyed, because Sonita was so great at playing that kind of dignified, looking down her nose at me, and I had to sit there and smile with my insides kind of being like, “I'm closer to your son than you realize.” I think there were a lot of scenes with the two of us playing off each other that were just kind of fun."

The outdoors scenes for Olympus were almost entirely shot against green screen, which although somewhat new for the actor, he enjoyed the experience."It was cool, because we had two stages - one which was a live stage and one which was just basically a giant green room, like a studio. And I have worked a little bit with CGI, but I have never worked in an entire environment that was made that way, so it made it into quite an interesting acting exercise. You have to use a lot of your imagination. You have to get your eye lines right and you have to really create in your head everything you think that world is going to be.

"It becomes really interesting, because you kind of paint the world the way you think it's going to be, and you sit there and you have this painting in your head of the sky and the time of day. And now this is coming out, and you're seeing it, and some of it you were right, and some of it you were off on. But when I'm watching it now, I'm like, “Oh man, that's super cool.” Sometimes I wish I was that imaginative." 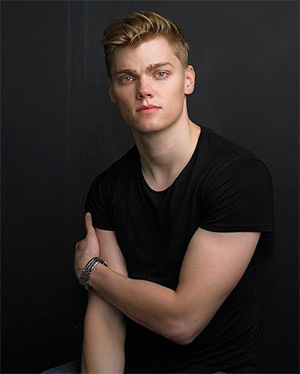 One of the other challenges that Meaden had, at least at the beginning, was finding a connection for his character with Lykos. "I guess the relationship I have with Prince Lykos in the show [was the most challenging]. I guess it was a bigger thing going into it, depending on how I was going to connect with the person who was playing the prince. It worried me a little bit in trying to stay focused and realize that I had to treat this like any relationship you would on screen. I think that was kind of difficult at first, but as the show went on, I think Wayne and I really built a rapport, so after a little while it wasn't such a big deal, but I know going in that was something I was certainly concerned about."

There were, however, other parts that he felt connected to right away. "I think there's a lot. He's a very, very intelligent person, and he came up in a place that didn't always celebrate that, and that's something that I think growing up I kind of had. I grew up in Calgary, and I come from a family of farmers and so forth. Sometimes you get overlooked when you're an artistic type of guy, and so I when I looked at aspects of my life in that sense, I understood Kimon.

“Also there's that yearning to get to the top, which I think he's constantly doing. I think he really almost succeeds by being right next to the price in his mind, and I think as he grows closer with the prince he becomes cockier; he starts to flirt with danger a little bit there. But that drive toward the top, I think I definitely also connected with."

When it came to the stories, the actor was surprised by a lot of the twists. "The twists and turns that happened [surprised me], because when I first got it, I got the first couple of scripts, and as you're reading through them, every time you kind of think you have somebody's direction figured out or where something's going to go next, it turns all of a sudden. And it turns with these great sweeping moments that are so satisfying, because they don't come out of nowhere; they're built in there, and when they happen you're just like, “Oh, wow, I did not see that coming.” And so I think I was really surprised just by how much Nick was able to pack into every episode and how much he puts these characters through."

You can catch Meaden as Kimon, who he describes in three words as "lonely, but driven," tonight on Syfy in his first episode of Olympus.
Twitter
BotonSocial por: SocialEmpresa
Category: Interviews