Last season on Big Sky, Ronald (Brian Geraghty) was finally arrested but talked the cops into bringing him to the crime scene where he was hiding a body. During return transport, members of the trafficking syndicate helped him escape with Scarlet (Anna Savcic), leaving Jenny (Katheryn Winnick) shot and Cassie (Kylie Bunbury) to give chase.

Tonight, on ABC, the series picks up after those events, but Ronald isn’t the only problem the duo will be facing this season, as another car crash outside of Helena will require their assistance, where teens get much more than they bargain for when they come into possession of some money. 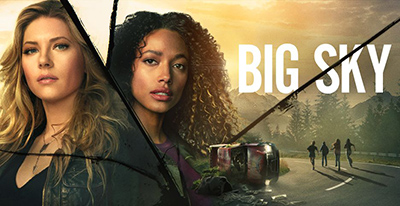 Jenny and Cassie’s partnership is still probably my favorite part of the series, as I think the two play off of each other well, and it’s nice to see that female friendship evolving as they bond. The two make an excellent team.

I also do enjoy the continued banter between Cassie and Lindor (Omar Metwally), and I hope they continue to have more scenes together.

I would have liked to have perhaps seen some more headway in the Ronald storyline, but as the executive producer, Elwood Reid, previously stated during a panel, it’s something that will play out throughout the season. There are however, some intriguing turns that take place, especially at the end of the episode that has a fun reveal.

The new case dealing with the teens also seems like it’s going to play out in an interesting way, but only time will tell.

I also appreciated that the episode didn’t seem quite as over the top as some of the others were last season, so it felt a little more believable, yet it didn’t detract from the energy of the series.

The episode also introduces a character from Jenny’s past, Travis (Logan Marshall-Green). Without revealing anything, I will just say that I was surprised where that storyline is taken.

I’m also happy to say that Jerrie (Jesse James Keitel) seems to be a permanent addition to Dewell and Hoyt, and I hope that the writers utilize her character to their advantage this season. It’s great that the show has multiple strong females.

All in all, Big Sky had a solid premiere, and I’m looking forward to seeing what’s next.
Twitter
BotonSocial por: SocialEmpresa
Category: TV Reviews & Recaps