Friday Syfy premieres season two of its returning series Dark Matter. The show follows the crew of the derelict spaceship, the Raza, who last season awoke from cryosleep with no memories of who they were or how they arrived on the ship. As the season went on they recovered some information, but many things are still unknown to them.

The main cast include Marc Bendavid as One, Melissa O'Neil as Two, Anthony Lemke as Three, Alex Mallari Jr. as Four, Jodelle Ferland as Five, Roger Cross as Six, and Zoe Palmer as The Android. Joining the team this season are also Melanie Liburd as Nyx and Shaun Sipos as Devon. 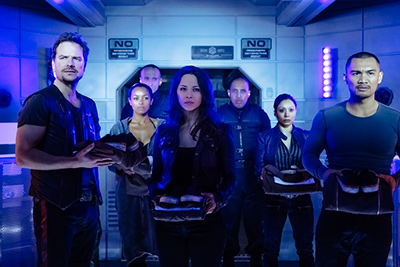 At the end of season one, fans were shocked to discover that the group was betrayed by Six. Friday's episode picks up afterwards when members of the crew are brought by the Galactic Authority to Hyperion 8, a galactic maximum security detention facility.

I really enjoyed the beginning of the season. The show picks back up with just as much excitement and moments as in season one and contains the same kind of major shocking moments.

I love that even in the beginning, the action is at the forefront with intense fight scenes and such. The show is always charged with non-stop energy and keeps you excited and anticipating what's to come.

The cast as always is badass, and the new additions fit right in and don't feel forced, which I was worried initially that they might, given how the storyline played out last season. I also really enjoyed the character of played by Mike Dopud, who added some excellent scenes. 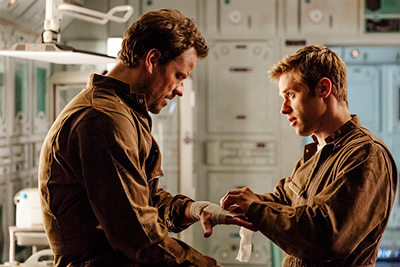 Besides being dramatic, the series always did a fantastic job of blending in some comedy, usually with Three's antics, and this year is no different. There are some really fun moments.

I also enjoyed the scenes with The Android as she continues to surprise.

There are, of course, great touching moments as well, especially dealing with Five and Six; I always love their scenes together.

Also of note, as massive and beautiful as the set of the Raza has been, the detention facility is just as grand. There's also a cool new piece of tech introduced.

Season two of the series so far is just as exceptional as the first. Dark Matter is a kickass sci-fi series that keeps you wanting more.
Twitter
BotonSocial por: SocialEmpresa
Category: TV Reviews & Recaps