12 Monkeys is Must See TV That Keeps Getting Better

Tonight Syfy's hit series 12 Monkeys returns with all-new episodes. At the end of last season in 2015, time traveler James Cole (Aaron Stanford) got Cassandra Railly (Amanda Schull) in the time machine, in which she splintered into 2043 at the temporal facility, much to everyone's surprise.

Meanwhile in 2043, Deacon (Todd Stashwick) of the West VII had broken into and taken over the facility with The Messengers.

The series picks up at that point, but things take a turn in a different direction. 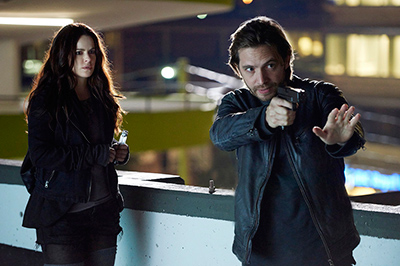 When 12 Monkeys first came to Syfy they did a fantastic job of adapting the film to fill the scope of television, and they came up with ingenious ways to keep the story going while at the same time keeping it interesting. Season two is no different. The show still feels just as fresh as it did as the goals of Jones (Barbara Sukowa) and the travelers shift as time itself becomes vulnerable.

There are still tons of twists and turns and mystery as in the first season, and every episode leaves you wanting more.

As always the effects and costumes are fantastic, but it's more about the story as it weaves in and out sending each character on their path.

Stanford, Schull, and Kirk Acevedo as previously are well fitted and believable in their roles, and it's fun to see Cassie involved in the time travel this season. Also the interactions between the trio continue to be interesting, especially after Cassie shot Ramse. 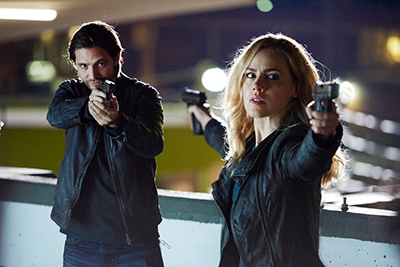 This season brings in a larger role for Stashwick, and with it his sarcastic (and sometimes cruel) wit. He's a lot of fun to watch.

I also greatly enjoyed the performances of Tom Noonan (Pallid Man) and Alisen Down (Striking Woman/Olivia), especially their scenes together.

The real star of the season, however, in my opinion, is Emily Hampshire, who portrays Jennifer so perfectly, with all her idiosyncrasies and explosive behavior, yet this time also gets to show some new sides to her personality.

Everything about season two is ramped up. 12 Monkeys is definitely a must watch, and it just keeps getting better.
Twitter
BotonSocial por: SocialEmpresa
Category: TV Reviews & Recaps