Will Joe be convicted of murder, or will he walk free? Who killed Lisa Newberry and Pippa Gillespie? Will the Latimer family be able to survive the trial? And, perhaps most importantly, will Miller and Hardy become a couple? These are just a few of the questions that were proposed at the beginning of Broadchurch’s second season, and viewers can rest assured, they will be answered in the season finale.

Throughout Broadchurch’s sophomore season, viewers have been biting their nails throughout the swirling intrigue of the converging plotlines (as well as the annoying court case, but more on that later). Coming off of the fast-paced first season, this season has had its stagnant moments. However, just when the viewer starts to worry, the story takes an unexpected twist, which is expertly handled by writer/creator, Chris Chibnall. Courtroom drama expert Chibnall is not, as evidenced by the numerous goofs in his courtroom scenes. That said, Chibnall’s strong skills in mystery, relationship drama, and suspense are immaculate, allowing the audience to forgive him for any transgression on the courtroom front. Finales can always be difficult, and dealing with tough subject matter means that endings are never happy. Yet Chibnall manages to draw all storylines to a satisfying close, leaving just enough room for a third season. 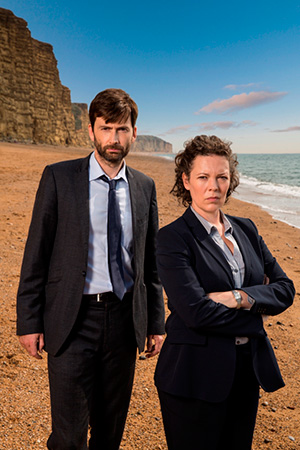 Performances are strong as always. In particular, David Tennant as Hardy, and Olivia Colman, as Ellie, bring compassion, humour, and delightful scrappiness to their roles, and all their scenes together are alight with energy. Andrew Buchan is maddenly good as adulterous father, Mark Latimer, while Jodie Whittaker brings quiet strength in her role as Beth. Also good are season two additions James D’Arcy and Eve Myles, as Lee and Claire, the prime suspects in the Sandbrook case, who’s nuanced performances keep the audience guessing right until the end.

The tight writing and performances, complete with the eerie vibes of the careworn town of Broadchurch, make for a completely compelling farewell to season two that is satisfying, hopeful, and heartbreaking all at once and leaves audiences clamouring for more. With all major cases tied up, we can only guess what’s in store for season three. One thing is for sure: Broadchurch will return.
Twitter
BotonSocial por: SocialEmpresa
Category: TV Reviews & Recaps