Last night's Helix was a doozy, and half the characters have gone off the deep end.

Last week Sarah attempted to make Landry immortal, and this week we get to see the complete result of that disaster, as he looks like Quasimodo. Amy has absolutely no patience and flips her lid, demanding Sarah fix it. Sarah is running out of time, as now Amy found another immortal to get what she wants from: Julia.

Julia thinks she can stop Ilaria from genocide by finding Michael's research for global sterilization. They just need the "mother" tree root, which Michael entrusted the location of to only two people: Anne and Landry - her son. So crazy Amy has been getting off her own brother. Though apparently everyone on the island is related to her anyway, as Michael has been raping all the women of the island. I think this show likes incest a bit too much. 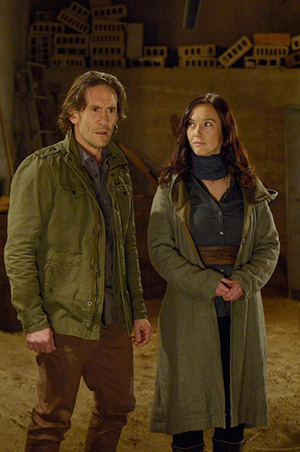 Everyone is after the root. After throwing a temper tantrum, Amy races to find "mother" before Anne, so that she can use it as a bargaining chip for her immortality. Balleseros is following her every move, however, and threatens and later slices Amy in an awesome, though also creepy scene, as of course Amy gets enjoys it a bit too much. Unfortunately, his life hangs in the balance, literally, after Landry has knocked him to the edge of the platform in the bell tower before falling to presumably his own death. I guess Balleseros should not have threatened Amy, who stomps on his fingers forcing him to fall. I'm really really hoping at this point that Sergio, who is always out for himself, as he was working for Ilaria, at some point negotiated for his immortality.

We also learn more of Michael's insane plan from Anne. The vessel must be prepared to receive the offering. The women that defy him get hidden in a creepy basement where Anne removes all their teeth - can't have them chewing on their feeding tubes after all - and Michael impregnates them, slitting their wrists after the babies are born and thus ending their "path." Michael wanted an immortal companion, but this is about control. Anne's as crazy as her lover/father. The worse part is that Peter so far may be okay with this. Though honestly it's so hard to tell anything with Peter; I'm holding out hope he's playing along - even killing one of the woman is honestly an act of mercy - though that's probably just wishful thinking. 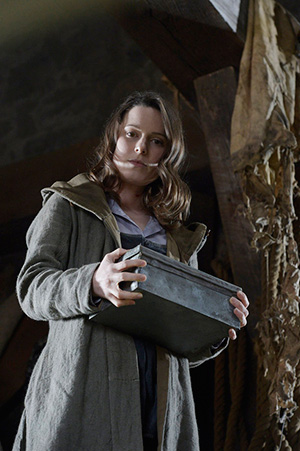 Speaking of Peter, he has a bit of heart to heart with Julia, who he claims he really loved. However, the one thing he wants above all else is respect. How far will he go to get it? I really hate to see him take up residency in crazy town with the rest of what's left of the cult.

There are essentially two storylines going on simultaneously in the episode, as Alan and the others search for the bleeding tree to save Kyle from his stunt of ingesting the fungus filled honey previously. We get to see Kyle go off the edge as he hallucinates the one-eyed Soren taunting him. And we also get another cryptic line with no context: "We all sound the same underwater."

At the conclusion of the episode, back at the abbey, Julia has figured out a way to give Amy what she wants, though doesn't bother telling Sarah, who was working with her, until everyone finds out. They have discovered that the reason the CSF transfer didn't work on Landry, though Sarah's did, was because Julia was a newly made immortal, and the immortal DNA didn't have time to transcribe into RNA. Sarah's son is stuck not aging, and therefore the DNA frozen in time, so the baby has what they need. Usually genetic traits transfer from mother to child, but in the odd twisted way that only Helix can come up with, they can reverse that, if they implant the baby into Amy's uterus. What the Helix? This show has gone batshit crazy, and absolutely I love it.
Twitter
BotonSocial por: SocialEmpresa
Category: TV Reviews & Recaps