iZombie - a Quirky, Fun, & Unique Take on the Genre

Tuesday The CW will be premiering its new series, iZombie.

Zombies are certainly popular as of late with the success of the hugely watched The Walking Dead and other recent projects like Syfy's Z Nation and films the past few years such as World War Z and Warm Bodies. Comparisons are obviously going to be made by many. Upon reading about iZombie, however, it seemed like it would be something different, and it was.

iZombie is a quirky and fun romp. It's got the humor and heart of Warm Bodies, but it's definitely its own thing. The show doesn't take itself too serious at times, which is as it should be.

The series, which is based upon characters created by Chris Roberson and Michael Allred for the comic book of the same name, follows Olivia "Liv" Moore, played by Rose McIver (Masters of Sex, Once Upon a Time), who has a bright future ahead of her in medicine and even a handsome fiance (Robert Buckley); everything is falling into place. Then suddenly everything is ripped away from her one night when she is turned into a zombie. Everything changes, from her look, to her upbeat personality. 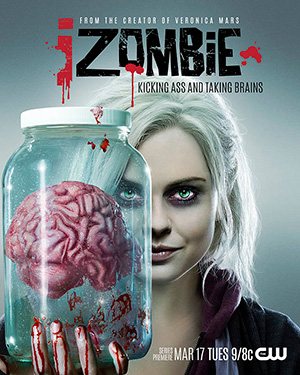 All zombie shows have their own slightly varied mythologies and such, and iZombie is no different. While the undead must eat brains to survive, they often do it with finesse Bobby Flay would be proud of.

There are some specific comparisons to be made to Warm Bodies - Liv experiences the dead's memories after consuming human brains, though with crazy, often funny, and some times even helpful side effects.

Working for the coroner, the visions are what put her in the sights of the Seattle PD, for whom she becomes quite an asset as she helps solve murders with her "psychic abilities." It's not the life she dreamed of, but it may help her to gain perspective and a purpose again.

iZombie is a perfect blend of drama and humor. The characters are well developed and cast. McIver is a perfect fit as the Goth chic posing zombie. The scenes with her and her eccentric boss, Dr. Ravi Chakrabarti (Rahul Kohli), especially, are golden as they develop a friendship.

Her working relationship with detective Clive Babineaux (Malcolm Goodwin) is also great fun, as are her scenes with David Anders as Blaine DeBeers.

All in all, iZombie has the makings of a hit for The CW, and I know I will definitely be watching.
Twitter
BotonSocial por: SocialEmpresa
Category: TV Reviews & Recaps