Tomorrow USA Network premieres its new murder mystery thriller, DIG. The series follows FBI Agent Peter Connelly (Jason Isaacs, Harry Potter franchise; Awake), who is stationed in Israel, under his new boss and lover, Lynn Monahan (Anne Heche, Men in Trees; Save Me). When he works to solve a murder, he is swept up in an ancient mystery of international conspiracies and secrets. He must dig deeper to uncover the real truth or it could be the end of everything.

The viewer is dropped in right in the middle to discover what's going on. The backstory of Connelly is not revealed instantly, and although it was a bit confusing at first, it adds to the intrigue of the overall mystery as you learn more about the characters, as well as the prophecies and secrets, as the story starts to unravel.

The show does an excellent job of not spoon feeding the viewer information which so many shows tend to do as of late. To find the threads of clues the viewer has to pay attention, which is refreshing. I loved following clues from points A to B through the different storylines and trying to make connections. However, that does mean one cannot really jump into the series in the middle and get a full grasp on the situation, but as it is a self-contained one season storyline of ten episodes, it isn't difficult to catch up.

Another great thing about the series is the viewer engagement. Viewers can "dig deeper" into the story with companion pieces. There is an official prequel novel on Wattpad that tells the story of Connelly arriving in Jerusalem and solving a cyber-heist that leads up to the premiere episode. Another is the on-the-ground Escape the Room games in different cities across the country that fans can participate in to become more immersed in the story. There is also the web game DIG Decoded, where participants read a journal and figure out puzzles to earn entries in the official sweepstakes. New puzzles are added weekly for more entries. Besides giving fans the possibility to win prizes, it's a lot of fun. There are also images in real life that one can scan with the DIG Decoder app to enter more times, as well as ads on websites that contain links to entries. 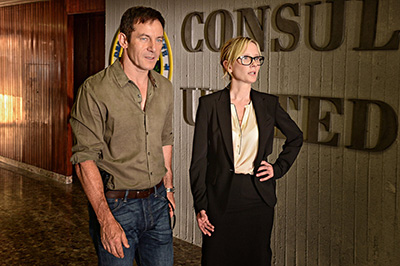 For the series itself, the script draws you in quickly. The various different storylines are woven together nicely and I really enjoyed drawing my own conclusions and trying to connect all the threads.

Also, watching the behind the scenes special on the series and knowing that some of the prophecies and conspiracies are based on people's real life beliefs, makes it even more intriguing.

Having been filmed across the globe, the series has that gritty feel that you can't quite capture on a sound stage, and it really helps to keep the viewer engaged. The show is truly gorgeous.

The cast was well chosen. Jason Isaacs is brilliant as Connelly and a lot of fun to watch as he follows the clues while often disagreeing with his boss and his partner (Ori Pfeffer). Isaacs and Heche play off each other exceptionally well, and the back and forth between Isaacs and Pfeffer is great.

I was sucked into the story right away and couldn't quit watching. I immediately wanted to delve deeper by reading the prequel and finding out more. I can't wait to see where the story goes. DIG is a well-planned out mystery and something different than the usual fare on television. It's a fresh, intriguing, and intelligent show for someone who likes to be engaged in a series and not just be handed all the answers. DIG is the new must-see show on television for me.