Friday Syfy premieres its new drama 12 Monkeys. The series is based on the film of the same name, and although the overarching plot comes from the film, the result is rather unique and definitely stands on it's own. The pilot sets up the series, and does take a bit from the film, but then it branches off.

The series follows Cole (Aaron Stanford), who is sent back in time by a group of scientists to stop a virus that kills most of humanity. Cole travels back and forward in time to try to save the world. He is helped in his past (2015), where the main part of the story takes place, by Dr. Cassandra Railley (Amanda Schull). The two follow clues to try to figure out what started the deadly chain of events.

Meanwhile in 2043 the scientists, led by Jones (Barbara Sukowa), comb through clues that Cole reveals, while also dealing with their own bleak reality. 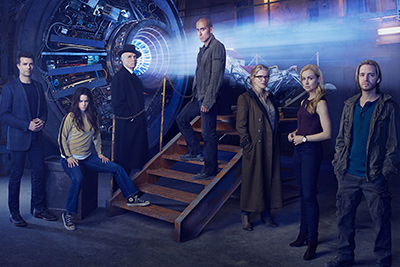 12 Monkeys is an excellent series, and is definitely full of mysteries about the virus and how it was released. There is a lot of action and the series does a great job of keeping you on the edge of your seat throughout. There is a great sense of urgency to stop the future, that carries through, even when in the current timeline nothing has yet begun. 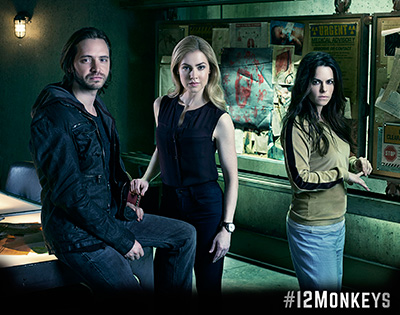 The visuals and special effects are fantastic and enhance the story rather than deter from it. The sets are also excellent and the apocalyptic future really sells the point of the destruction around them and what life has become.

The cast was well chosen. Stanford and Schull have great chemistry and play off of each other really well. Stanford is believable even when he sounds crazy, and it's easy to see why Cassie believed him from the beginning. 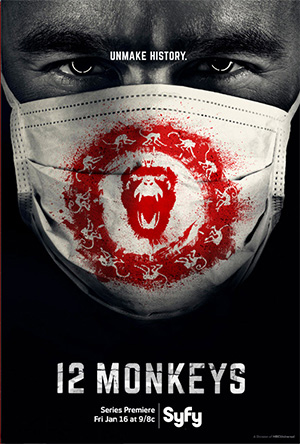 Other standouts include Kirk Acevedo, who plays Cole's friend who works with him in 2043, and the backstory of their friendship is a great addition to the story as it is revealed throughout the first few episodes.

Another is Emily Hampshire, who plays Jennifer Goines, a girl who seems to know something about the virus, but she isn't talking. Her interactions with both Stanford as well as Tom Noonan, are very enjoyable. Noonan, who is another who stood out, plays a mysterious and creepy villain and adversary of Cole's .

The script is fantastic; the story quite an exciting ride. However, the show does jump back and forth between time lines, which although helps create tension, can be confusing at times if the viewer doesn't keep track.

Going into the series, I was wasn't sure how they could continue to branch out from the original idea from the film, but the writers have done a fantastic job of creating intriguing twists and turns. Even having seen the movie, I still have no idea what is going to happen next. I also really enjoyed the way they have handled paradoxes and time travel theories. It's definitely a mind bender.

12 Monkeys will blow your mind, and it only gets better. Like a good book, you can't put it down - or in this case, the remote.
Twitter
BotonSocial por: SocialEmpresa
Category: TV Reviews & Recaps