Note from the author: This time I did something much different with the review. I wanted to include the changes in the film from the book since parts of it were so different.

Although I discuss some of these changes in the review I decided to include the major plot changes after the main part of the article so that fans of the book can read the differences, yet moviegoers won't be spoiled if they don't want to be, nor bored reading about things that only happened in the book. The section is marked after the review.

Valentine's Day marks the opening of a few different films this year, including Beautiful Creatures, which technically opened with a 10pm showing last night across the country as opposed to midnight. Knowing from trailers that I really wanted to see the film, I opted to get the book that the film was based on, written by Kami Garcia and Margaret Stohl, before I saw it (and loved it, I'm on the last book in the series now). Doing that can sometimes give you different expectations.

As a film, it was well crafted and I definitely enjoyed it, though I admit spent a large portion of the movie comparing it to the book and questioning why some parts were changed – a lot (see below).

The overall story was the same: a Mortal (Ethan Wate, played by Alden Ehrenreich) and Caster (i.e. witch) fall in love but can't be together because of their circumstances. The girl, Lena (Alice Englert), is about to turn 16 and will be Claimed for either the Light or the Dark, regardless of choice. 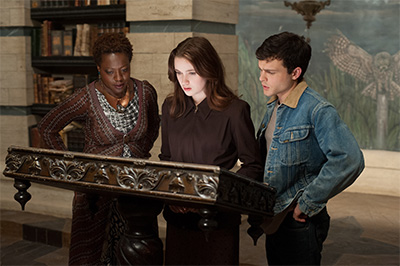 The film contains most of the main original characters from the book, played by a exceptional supporting cast, including Jeremy Irons as Lena's uncle, the mysterious Macon Ravenwood. Although no explanation is given to what kind of Caster he is, Irons plays him well.

Viola Davis plays Seer Amma, who is essentially merged with the character of Marian, because she is also Keeper of the Caster Library. At first I didn't like the idea, but Davis pulled it off, so it worked in the end. With a lesser actress, it might not have.

Emmy Rossum is Lena's cousin, the sexy siren Ridley, who has been Claimed for the Dark. Unfortunately she does not have as much of a role in the film as in the books, but she's still a fun character. Although Rossum is really a standout in the film, she is written in my opinion to be less likable and less redeemable in the movie.

Thomas Mann plays Ethan's best friend Link. The actor fits the role well; unfortunately he was not given very much screen time, which is a shame, as his character is one of my favorites in the book.

Regardless of amount of screen time, or lack thereof, the supporting actors all did great things with what they were given.

The two lead actors were also well suited to the film. Englert was believable as Lena, and Ehrenreich was excellent as Ethan, delivering his lines with earnest and wit. I haven't seen either on film before, but I'm sure they will continue to be in the future, especially Ehrenreich who is sure to be a teen icon after this film.

The script itself was well written, even if it veered at times way off book. It wasn't that it didn't work; I just didn't understand the reasons that choices were made for such big changes. 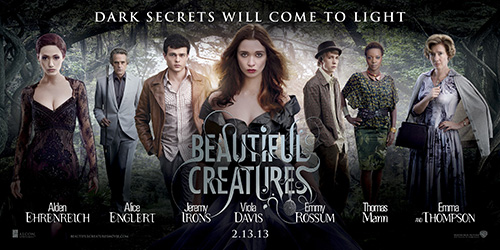 The visuals were also superb, using both well thought out sets and stunning visual effects. One of the things I enjoyed is that surprisingly there aren't a ton of special effects in the film. They are there when they are needed and enhance the visuals, but not to a detriment to the film.

I liked the glowing type in Lena's room as a visual effect (as opposed to Sharpie) and the sequence with Ethan being stopped by Macon from entering the house that has been bound. Also the Ravenwood Manor set was massive, modern, and very cool, though surprisingly (and unfortunately) stayed pretty much the same when it came to overall layout. One other creative choice that was different in the film is that the Dark Casters have gold eyes, but there is no mention of the Light Casters having green eyes.

One thing that was left out of the film that I wanted to mention, because to me it felt like a plot hole, is that although it is mentioned more than once that Casters and Mortals cannot be together, it is never explained that the Mortal can't survive it. Lena and Ethan seem to have no problem being close. Ridley and Link even get closer with no consequences. It irritated me a bit that they didn't explore this at all in the film. I was also disappointed by the lack of Kelting (telepathy) between Lena and Ethan, thought that may have been cut for time. 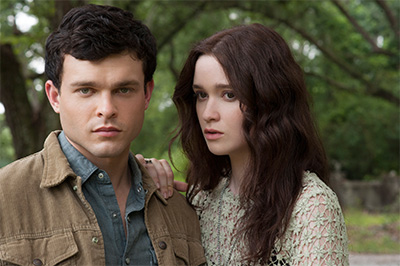 Regardless of the changes, overall the film was a success in my opinion – it had romance that was for the most part believable, elements of fantasy and adventure, and even some funny moments. It also thankfully was not in my opinion really geared specifically to teenage girls as some of the other popular films in the fantasy genre have been as of late. My only real complaint is how much was changed from the original story. If I hadn't read the book first I don't believe I would have been irritated at all, as it was a really enjoyable film for me.

The ending (which is also much different than the novel) is definitely left open to a sequel, though because of the changes, including a key element from book 3, Beautiful Chaos, that has been swapped as a major plot element in the film, I'm not sure how much the story will continue to veer off course.

Regardless, if you are a fan of the genre and want to see a fantastic movie, I recommend going out and seeing Beautiful Creatures – and then go read the books.
Twitter
BotonSocial por: SocialEmpresa
Category: Film Reviews