Many people didn’t care for the 1995 comic book adaptation, Judge Dredd, starring Sylvester Stallone, but I for one did. It was the perfect partner piece to Stallone’s other “future cop” movie, Demolition Man. As such, when I heard of the new adaptation, Dredd 3D, I knew I was going to have to see how this new one stacked up. As a brief disclaimer, I only got to see the film in 2D, since I’ve never been a fan of the 3D fad. That being said, I will recommend that anyone going to see the film do so in its intended 3D, otherwise a lot of flying splatter will only be half enjoyed. Also, if that didn’t tip you off, this movie is very much rated R. 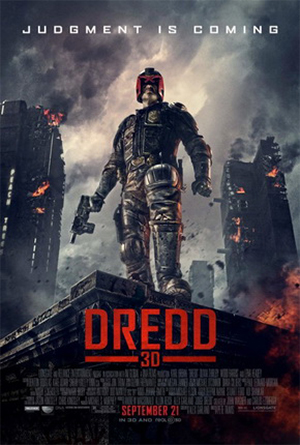 Now, as the movie opened up, I’ll admit to a little disappointment. The visual aesthetic of Megacity 1 from the previous Dredd movie has changed to less Blade Runner for a closer to home, District 9. In fact, I’d go so far as to say that the movie makes took the original 90’s Dredd flick, and threw it in a pot with District 9 and The Raid and this is what came out. I miss the old flying cars, and “rat-burger” feel, but where the new film lost the comic book eccentricities it picked up in immersion.

Dredd 3D is a slice of life story about Judge Joseph Dredd in the semi-near future. “But Dan,” you say, “I thought you alluded to the fact that this movie was filled with gore. How can a Judge Dredd movie be a slice of life story?” Ah, but therein lies the beauty my friends. We are indeed treated “to a day in the life,” but it’s a day in the life of Judge “I am the law” Dredd. Brutal gunfights, explosions, and twelve rounds of unfeeling, uncaring, badass justice is what you get. Star Karl Urban, known from other action sci-fi flicks such as Doom, and Chronicles of Riddick, may not have as square a jaw as Stallone did, but he more than makes up for it Dreddness. 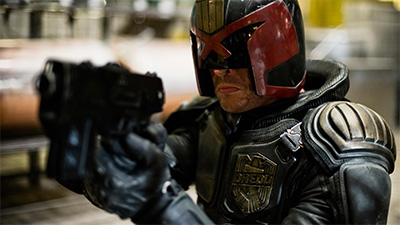 Admittedly, there’s not a lot of story to this film, but as I said, this is more of an immersive experience. Further, whereas earlier this summer when I said that The Avengers did a comic book movie right by making us feel like we were watching a comic book, Dredd 3D does a comic book movie right in that this is just one episode, in the middle mind you (very important), of our comic book protagonist’s career. Just imagine if other Hollywood film makers could get this concept, particularly those put in charge of Superman, Batman, and Spiderman. Does anyone among you not know who they are or how they got their abilities by now? We don’t need origin stories for the three biggest names in comic book movies anymore, just skip to the alien invasions and fending off the Hobgoblin already. 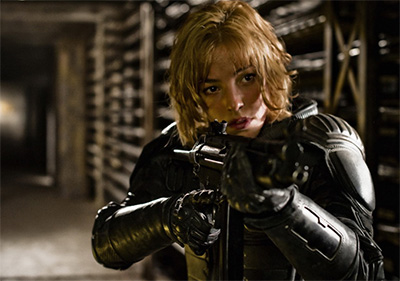 But what about Dredd 3D? Is it worth your $10 per ticket? Well, if you enjoyed the new Total Recall, The Raid, or even the 90’s Judge Dredd you should enjoy this one. Just be aware, it is very much R-rated, (right where many feel Joseph Dredd should be).
Twitter
BotonSocial por: SocialEmpresa
Category: Film Reviews