SciFi Vision | Another Save the OA: Live Tweet Fan Event: Join Us Tonight 8/12

Another Save the OA: Live Tweet Fan Event: Join Us Tonight 8/12

Published: Monday, 12 August 2019 13:52 | Written by SciFi Vision
Unfortunately, Netflix has officially cancelled its series The OA. However, that doesn't mean that its fans have given up hope. Fans around the world have rallied together on all social media platforms to show a united front to let Netflix know that we want a third season of the show.

Among other parts of the movement, fans have decided to have a scheduled live tweet at 8pm ET tonight on Twitter. If you want to be a part, at the scheduled time, simply tweet #TheOAisReal. Of course feel free to write how you feel and add mentions to Netflix and the actors! For sake of trending, however, please only use the single hashtag in your tweet, and its preferable if you don't use it one hour before scheduled time.

**Note that we will likely be scheduling more of these. There has been some miscommunication between different groups and the hashtag was used previously today, which could potentially affect trending, but next time we will all be on the same page.**

It would be great if you could join, but even if you can't, reposting would be very helpful to help spread the word. Feel free to use the image below in your tweets. You can share this article using the tweet button below the article after the cut, or simply retweet the pinned tweet on @scifivision or @SaveTheOAorg on Twitter.

Be sure to also take a moment to sign the petition created by Rafah RAFFAA on change.org to make your voice heard. It is now linked from the site I have created at savetheoa.org, which will soon contain a full site dedicated to the movement with other events you can take part in, as well as fan art and more.

Read on for more instructions as well as a link to all the official related accounts. 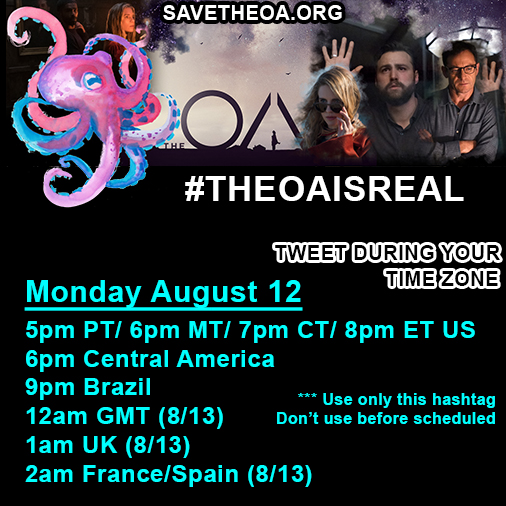 Be sure to tag @netflix and/or @the_oa in your tweets when you can so they will see your tweet as well. Feel free to tag @scifivision or @SaveTheOAorg as well if you feel so inclined.

If you think you are able to join in, we would love it if you could let us know and spread the word. Feel free to use the above image or retweet the pinned tweet on @scifivision or @SaveTheOAorg

We also now have a group chat we have put together on Twitter and Discord if you want to discuss the event/the show. Just let me know if you want to join it, but be aware it's fairly active at certain times of the day.

Thank you for any help you can give, and don't forget to leave your door open!
Twitter
BotonSocial por: SocialEmpresa
Category: All Categories