Tonight the newest episode of The Magicians aired on Syfy, “Ramifications.” In the episode, Penny, played by Arjun Gupta, helps his friends in their continued quest to stop Renard (Mackenzie Astin). He and his new ally, Sylvia (Roan Curtis), finally make it into the poison room, which they are able to access via the fountains. Penny is successful in his search; however, unfortunately, he is hurt retrieving the book, with his future left uncertain.

Recently Gupta talked to SciFi Vision in an exclusive interview about the episode, including filming in the poison room, Penny’s relationships, and more.

SCIFI VISION: Can you talk about your relationship evolving with Kady this season? 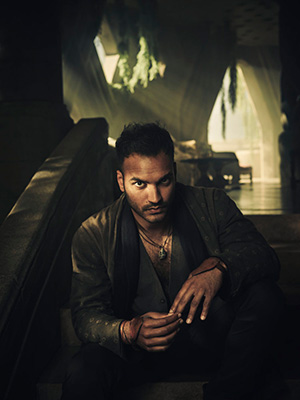 ARJUN GUPTA: I think it's complicated when you fall in love with someone who then betrays you, and then you're put back in touch with them, and you've never really gotten over them. And I think that they are attempting to rebuild the relationship without really dealing with some of the stuff that's going on underneath, and I think that that surfaces. And at the same time, they're trying to do all this while they're under life or death circumstances.

And so I think that's kind of what's driving the relationship, and we'll see that Penny [is growing up within this] and that he's making a choice around his relationship, and never for himself, and putting her above him, and I don't think he's ever done something like that in the past.

I would like you to talk about some of his other relationships, his friendships. From the beginning, he was mostly on the outside of the group, and he especially didn't get along with Quentin (Jason Ralph), but this season he's integrated himself with them more.

I think that at especially the start of the season, they're still dealing with the Beast (Charles Mesure), and Penny doesn't have hands, and he knows that he needs people's help. He has to rely on someone; he is forced to be a part of the group because of the Beast.

As we see through the season it kind of comes and goes, and he forms mainly a team with Kady. And then because Kady wants to become a part of Julia (Stella Maeve)'s team, Penny begrudgingly kind of goes. He hasn't bought in completely with the idea of teamwork, but he is shifting with that for sure.

Talking about the Beast reminded me of something else I wanted to ask you. Penny lost his hands before getting them back - twice. Can you talk about the special effects and logistics of filming those scenes? 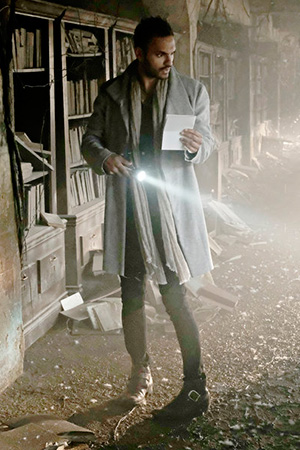 It was funny. When I first got to Vancouver, they sent me over to Masters FX, to our amazing prosthetics guy, and we tried on a couple different arm prosthetics, which had no hands, which I would be puppeteering from below using wires and stuff. And we tried that a little bit, but then Magali Guidasci, our brilliant costume designer, unconsciously had saved our butts, because Penny was in these really long coats that had sleeves that were really long, and so our props guy Pat O'Brien and his team came up with these gloves that we put around my hands, and it was on me to make sure my wrists didn't move too much or anything like that to betray the gag, but it became about that. That's how we did it.

It was very strange too. It's very vulnerable to not be able to use your hands, like I couldn't go pee in the middle of filming. [laughs] I had to have the props people in the costume department come help me take the tape off and the gloves off and unwrap my hands, and then I could go pee. [laughs] I really dropped into the character there. [laughs] I definitely had a blast doing that. It's really fun to get to do that kind of physical work. Penny's has gotten to do a lot of physical stuff this season that was unexpected, and such a joy for me as an actor.

Also earlier in the season, I would like you to talk about 2.07, with the bank heist, which is my favorite. It had to be fun to film that.

I mean, it was definitely a surprise when we got that script. I don't think any of us was expecting that, but it just became a fun action movie for eight days of our lives. I got to fly; I got to levitate, and I got to steal gold and do all this [stuff].

Acting in an action film is very different, because so much of it has to do with the editing. And huge thanks to Chris Fisher, who is our producing director and directed that episode. He was so prepared and knew exactly what he needed for each shot and made it a very seamless process.

And it was a complicated script, because there was a lot going on, and it ended up just being such a fun and seamless experience, because you kind of just drop in and embrace the fun of 'okay, cool I'm robbing a bank.' We had a some really fun times.

There was also a really fun scene where Penny and Kady got back together, which was fun.

And then also, Penny gets hit in the head with a spoon. All that fun stuff was happening. It was kind of just all of a sudden a little bit of a left turn to get back. 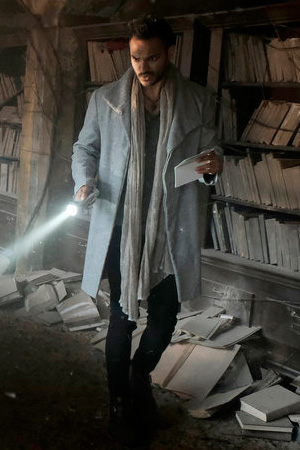 And then selfishly, not artistically, just as a fun thing, all of us were in the same room, because we're all acting together, which is not something we've had a pleasure of doing a ton of. So it was a lot of fun from that standpoint.

Now I would like to talk specifics about episode 212. Can you talk about Penny's trip into the poison room with Sylvia and how it affects him?

And what is being asked of these kids? You know, these characters are in their mid-twenties, to ask this kind of stuff of them is a lot.

And so, you know, my impulse is that that is a seminal moment for Penny, because he has to leave someone to die in a way that is a choice that I don't know that he's ready to make. And I hope the writers will incorporate that long term consequence into his life.

Can you also talk about filming that scene? The set was really interesting.

That was one of the more fun scenes and days of the season for me. One, because we shot in a mine in North Vancouver. It was just me and the girl, Roan, and we had such a fun time working in that mine.

Margot [Ready], who was working on our production team, and she was the production designer of that episode, of 12 and 13, did a fantastic incredible job creating the look of the poison room.

Elie [Smolkin] did some amazing writing and camera work with his team, and we just had a blast.

The special effects guys did a great job making all those feathers and all this sort of stuff that made it just feel so eerie. It was really easy to act during that day.

Sylvia talks about reading Kayne's book and how Penny's book was reshelved thirty-nine times. If you could read anybody's book of their life story, whose would you want to read? 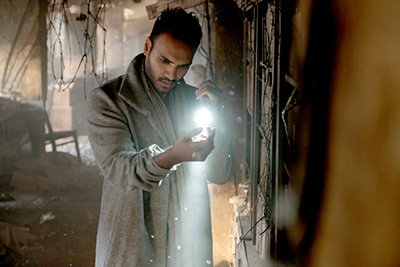 And then go tell them their ending?

No. I don't know that I would. I mean, I hope I wouldn't. That's an immense asshole! That's terrible! [laughs]

We know from what Sylvia said about his book being changed thirty-nine times, and obviously from what Dean Fogg (Rick Worthy) said, that Penny has been in this kind of loop. In 2.10 we saw Julia from one of those alternate timelines. I'm curious to know, if it were up to you, what would you like to see Penny doing in one of the other realities?

**UPDATE: Be sure to read part two of this interview!**
Twitter
BotonSocial por: SocialEmpresa
Category: Interviews